Particles change speed with framerate (so what's the correct framerate?)

So the big question is what’s the correct framerate for accurate physics with particles?

i would say 14 ps, or 24, but it really depends on the actual framerate, If you can, i would go with the blender internal original framerate, which is about 10-14 frames per second

i would say 14 ps, or 24, but it really depends on the actual framerate, If you can, i would go with the blender internal original framerate, which is about 10-14 frames per second

What have you been smoking? You started to spam the forum back and forth with unsubstential posts… this times with random numbers. Where did you even get them from?

–
@hakatu:
Not for some reason, for a very particular one.
Particles work on a per frame basis, not on a time basis. So obviously they speed up and slow down as you change the FPS.
I´d simply start out with 25fps if you use PAL, 30fps if you use NTSC.
For physical accuracy it is really up to you to do the timing. Running with 25fps, obviously 25 frames for the particles represent 1 second.
I really don´t think there is a framerate at which the physical properties of a particle system match the real world.
It is a balance between framerate and scene scale, depending on what 1 BU represents, if it is 1m, 1mm, 1inch or 1 yard.

lol I got them from my random sense of humor, sorry thread starter, but…well ive got to say, i honestly thought they were the FPS that blender used xDDD

I don’t know if it applies to particle physics, and I have yet to find a document that nails it down with “hard” evidence, but the impression I’ve gotten over the years with Blender is that the physics code uses a 30fps base time scale. The Fluid sim can be fudged using its settings. I’m pretty sure Cloth and Soft-Body currently are based on that frame rate.

You should be able to go a little on either side of that mark and still get decent results without having to fudge your specs, but anything below 24fps (a standard motion-picture film speed) and you risk getting things more noticeably distorted.

As Arexma mentioned scene scale is also a factor, in that (and I’ve heavily researched & tested this) the Cloth and SB sims are apparently based on a world scale of 1 BU = 1m. This is a less-sensitive aspect than frame rate, but if you get too far from that base scale (one of my projects did & I paid for that ignorance!) it can greatly affect how some of the sims work.

As always YMMV (Your Mileage May Vary). I think that in planning a project, it’s better to settle early on things like frame rate and world size, keeping in mind some of the limitations mentioned in this thread, and then use the various settings to achieve a “best-looking” result rather than a physically-accurate one. The two aren’t necessarily synonymous. 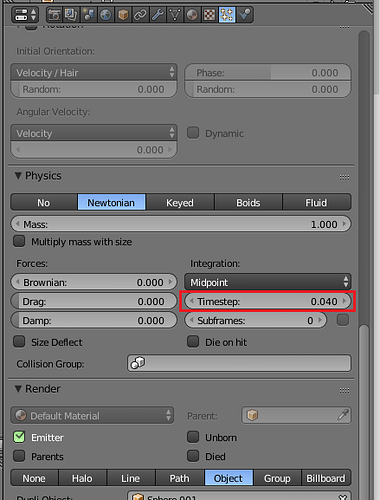