I’m making a short film with a character who has hair and a skirt and is standing in a wind simulation. I’m having trouble with the particle (hair) simulation. The particles move through the mesh, as you can see in the following image: 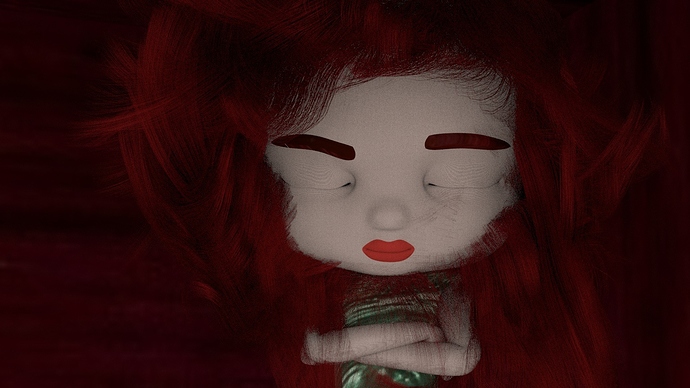 I don’t have the same issue with the skirt. It works perfectly.

I have done the following in setting up the hair particles:

While doing these have solved other problems I was having, I don’t know the magic bullet that will fix this particular problem. Maybe it has to do with Blender’s capabilities, but this seems like a really basic thing for anyone wanting to make a hairy character be present in a wind simulation.

Hair has no reliable collisions at the moment. It’s been a problem since it was introduced and caused all kinds of headaches when making Sintel. Hair will, however, respond to force fields, which is a not-so-great workaround. The good news is that as we speak the hair system is being completely overhauled and separated from the particles system, including adding collisions (via Bullet I believe).

Insofar as solving my problem, that’s unfortunate to hear, but as far as getting a definitive answer on the matter, I am strangely relieved :). I figured they must be working on this as it is fairly key for any kind of serious character animation.

It seems to be Lukas Tonne’s number one priority at the moment, and he pushes through plenty of commits to his hair branch every day, so the wait shouldn’t be too long.

If it was ready in the next month or two, I could get it into my film. Is there any word on the timing for the release?