Hi!
I am preparing for a non photo-realistic 2D animation that shows a substance moving through a hose. I want particles to go the whole way through the (transparent) hose which also is curved in different directions. When they hit the inner wall of that hose they should bounce back in the middle, following the stream direction until they come out at the end of the hose and die.

Is this possible with blender’s current particle system? Though I am experienced with modeling and texturing I am a noob to particle animation. Maybe there is a good tutorial around that shows how to make particles follow a path and interact with barriers and obstacles? 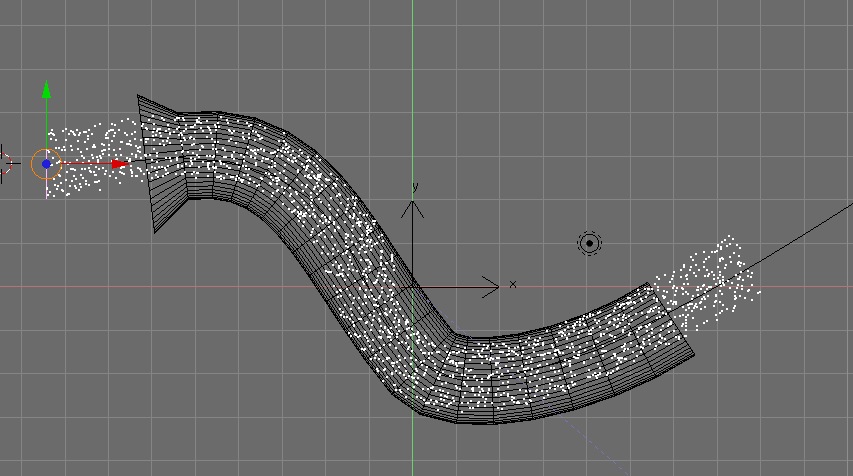 NOTE: Just tried the blend in 2.5a2 and it doesn’t work the same so some tweaks will be needed if you’re not using 2.49

When I checked it out, I noticed all the particles were behaving nice and uniform. So I put the curve into edit mode, selected the center point of the curve. I pressed the T key and twisted that point of the curve around a few times. Sure enough, the particles picked up on the twist and began spinning as they traveled along the curve. I had never done that before, and was not sure if it would work. So I thought I would post back that particles along curve guides do respond to twists in the curve as well.

If you just want particles going down the tube without any particular control you can just delete the curve guide. The particles will still bounce off the inside of the tube as they flow down it.

here is a test with the fluidparticles. a problem with particle based fluid simulations is that it is very easy to get unstable simulations, like this one, even so this simulation took close to 1h to bak, which is a long time for such a simple simulation. i would recommend using the old fluid simulator instead

Great folks, this really helped me a lot!
Richard, your demo is exactly what I was trying to do. I tweaked around with the values a little, deleting both the curve and even the tube to get a feeling for the particle behavior. Works fine! Thanks a lot!
Ulli