Paying a mentor to teach me while completing my 3d character

I need help on completing a 3d character I’ve started on. (My first)

I’ve already made the model (Which I’m just semi-satisfied with) and now trying to uv unwrap it but having a tough time.

It shouldn’t be a complicated model since it has no nose, ears or mouth.
The model is at 928 faces right now.
It’s also mirrored (464 faces per side). What I want to achieve with the teacher:

Review the model in close detail and look at removing any polys that are not needed or don’t bring enough to the table.
I’m worried about the fingers for example that I might have a much bigger polycount in them than the rest of the models parts.
Help me reshape parts that look ugly or could look better.
The feet and hands were the most troublesome for me.
It’s meant for an isometric game. Example: Bloodline Champions.

Then we move onward to uv unwrapping it.
This is what I’ve managed with the uv unwrap so far:
(It’s also the moment I realised I really need some help since I still can’t get it right after watching and reading tutorials for an entire day about uv unwrapping and I am getting really exhausted and starting to feel like giving up.) And then we move on to creating a skin texture for it in photoshop.
I’ve barely used photoshop before but I assume it’s just picking a color and then adding some layers to it?
It’s not a human character so it doesn’t need to be human skin.
I’ll also need you to tell me where/how to paint the eyes and I’ll do that and let you know when it’s done so we can move on.

I would also be interested in learning how to use a greyscale skin uv image so that the skin color can be changed easily.
That’s not a requirement though but it’s a bonus, Even if you can just give me a good & solid introduction on how to go about using greyscale because I have a very hard time googling for info on that.

After the character is textured I am not sure how much help I’ll need with rigging.
I’ll try and do as much on my own as I can… At minimum I’ll ask you to review the rigging once I’ve made it.

And then we’re done

I would be willing pay around $50 for this.
But if there’s no way you’ll do it for that…
Then try and give an offer of the minimum you can imagine doing it for
and I’ll consider it if no one accepts to help me within my ideal price range.
(The more you ask for the less likely I am to accept).
But I think $50 is a fair number since this is pretty chill & casual work on your part.

We’ll use teamviewer when looking at the character together: teamviewer. com
It allows you to see my screen and I think it’s even possible to give you some control.
I know it’s possible for you to show me where to click at least.

I hope you’re someone that are at the computer most of the day so it’s easy to reach you without having to make appointments for each short session which might not last more than a few mins perhaps.
And that you’re someone that’s confident and know what you’re doing in the whole prosess of creating a character.
From modeling - uv unwrapping - texturing - rigging and animating (We won’t go into animating though but I think you should know how to do it).

Please show me at least one of your previous 3D characters you’ve made.
Remember it’s going to be a low poly character so I’m not too interested in seeing 3k polycount models.
1k poly count is OK I guess but the character doesn’t even have any clothing, ears, mouth, nose, just 3 fingers etc… So I would imagine this character should be able to reach a lower polycount.
Look at these for inspiration of what I mean by low poly:
htt p:// tommytallian.blogspot. se/p/low-poly-tf2 . html
I would love it if you can help me reach that kind of polycount with my model.

your model is not bad, but you need to think in terms of how it will bend and distort when rigged. for every place where there is a joint, there needs to be 3 edgeloops, and they should line up perpendicular to the limb / finger
(edit) here’s an example of what i mean 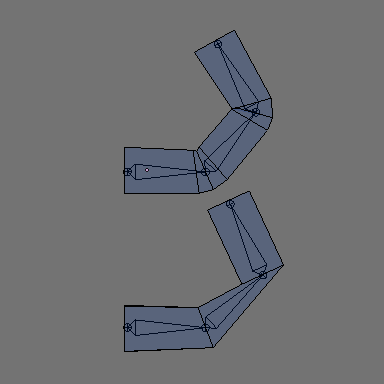 (edit) also I noticed that there is something weird going on with your UV coordinates. try going into edit mode and doing a remove doubles on all the weird parts, and also recalculate normals outside on the whole mesh in edit mode. then try loading the UVs again. It might be a seam issue too, but I don’t think so.
(edit) it could very well be an issue with the mirroring too. I think your faces might be overlapping along the middle, and need to be welded together after applying the modifier. the way to do this is to use the scaling widget to scale the central edges inward, and then remove doubles.

I actually do have some joint loops in the model but it might be hard to see from the image.
Here’s one of the elbow joint, I have a similar one for the knee joint. 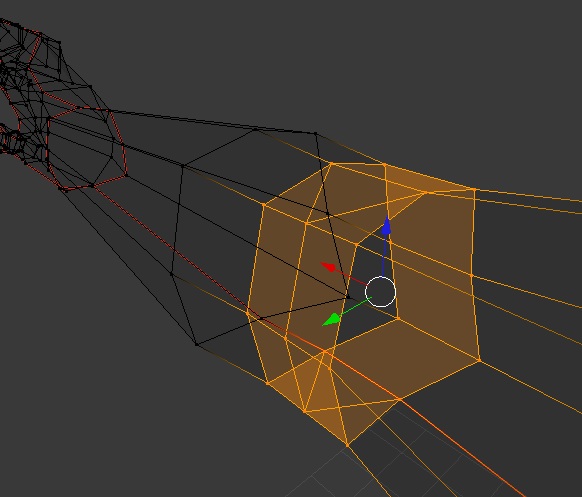 It’s a bit confusing because everyone shows different ways of doing joints and I’m not sure which one to go with. What do you think of this one?

I also used that joint loop for the fingers but I just changed it right now before making this reply. Would like feedback on that as well, The new joint is the one on the right side: About the doubles issue… It seems to have made a improvement on the uv unwrap.
Thanks

There were no doubles in the center but there were around 8 in total and some if not all of them came from the inner thigh, right where 2 seams were… So I had to remark those seams again. It’s a lot better but still looks confusing to me though :eyebrowlift2:
I’ve no idea what those things that are sticking out are for example.

And to all that offered to mentor me through this, I will most likely chose one of you today.

both of the UV islands on the left side are messed up. i am not sure what it is with the upper one if not a normals, doubles, or mirror issue, but the lower one needs more seams. think of it as tailoring in reverse. you want to make seams so that everything can unfold easily into a flat pattern. if you don’t make enough cuts, thngs will not be able to lay out flat without major distortion, which results in a stretched texture, or other problems.
(edit) you can add a test grid to help evaluate your UV layout. if you unwrapped correctly, the grid should appear undistorted and even for the most part like so: (edit) you also might want to check for redundant faces. if you render and some faces come ut weird and noisy looking, you have redundant faces, which will have to be deleted.