PBR Bridge – How To Be Lazy & Focus On Your Art 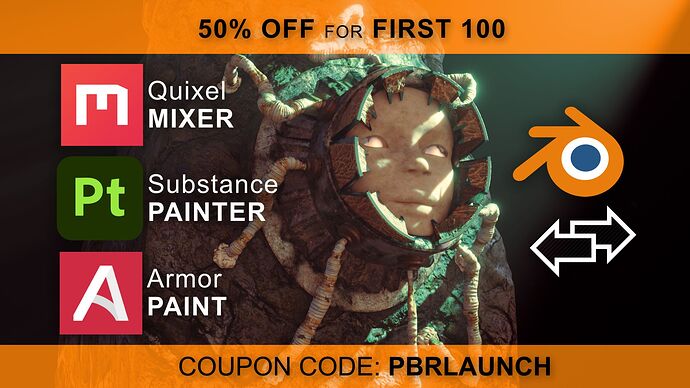 It’s amazing the amount of time I was able to save from tedious manual tasks! You can forget about model import / export, baking material IDs, joining meshes, creating shaders or applying modifiers and you can Just focus on your art

You can simply go back and forth between Blender and your texture software to retouch your modeling, UVs, UDIMs, etc.

So behold! This addon fully automates the whole process for you.
At the end of the day, it basically sums up to two operations:

Timelapse of iterative process with Blender & Quixel Mixer (no commentary yet)

Maybe a video would be good on what the workflow actually looks like. I use substance painter and never really had much issue with the workflow as a game dev the final model is normally prepared before i export out to substance anyway.

I’m actually working on one, but coding is way more easier ^^.
Here’s one that I made with Mixer, I was supposed to add a voice cover, but I don’t think I’ll keep that one:
https://www.youtube.com/watch?v=wcJLL2L41r4

As a game dev you should have experienced a lot of go back and forth when your AD changes his mind ^^.

Also I already have a lot of delighted customers, one of them said “I was able to do in 5mins what usually takes me like 30mins”. Which was my goal so I’m quite happy ^^.

How does this deal with low and highpoly baking in mixer or substance as well as cage exports ?

If you’re referring to: bake from 1 highpoly mesh to 1 lowpoly to generate the normal tex, etc. which you’re going to use as base in Substance or Mixer, I think that will work too.
That baking part isn’t done by the addon, the import/setting in Mixer/Substance would be done manually for these particular maps.

That would mean that the mesh you’re gonna add as a “mix” & click on “edit with Subs/Mixer” is the low poly one. Everything would be then created for you, you’d only have to assign your baked maps.

As it would generated less accurate cavities and such, I would not recommend that workflow (if doable, if you have really too many poly to work with Mixer or Subs, then you don’t really have a choice…)

So you are saying to bake the maps in blender and move those to substance instead of doing the bake inside of substance ?

I used PBR bridge already. And it’s good so far. I just notice, when I have an texture applied in Blender and I wanna edit this and import in Substance. My own texture doesn’t get imported. For example, the model has already textures that were not made in Substance but you wanna add decals or smudges or worn edges additionally in substance. Would such a feature be possible? My workaround was manually importing my textures inside substance again and then edit on top of these.

Hi, is it possible to support 3dcoat ?

Hi & Thanks for your support and feedback

Indeed, this case is currently not supported and you’ll have to set these textures manually.

It would be great to be able to support this but I honestly am not sure such a thing is currently possible taking into account the actual Substance plugin API.
Also:

For Mixer case, since I’m actually hacking their xml to create a new project with the requested paths, (this file is a mess haha, it’s a very weird object serialization…) I would say that it might be doable to to this, but that’s a wager…
Then, same questions as above.

I currently didn’t think of that one, someone suggested Mari, which I’m considering.
I don’t know anything about their API so I have no view on the feasibility of it!

thanks for you reply !
I just bought it from blender market, it is amosome !