Here is the last update of the flythrough:

Here are some images of my entry to a competition for a pedestrian bridge in amsterdam. I had no time to finish it completly but it was a good way to test Cycles and have fun with the new boolean modifier.
The images are quite big, sorry. I will improve them later on when I have time. 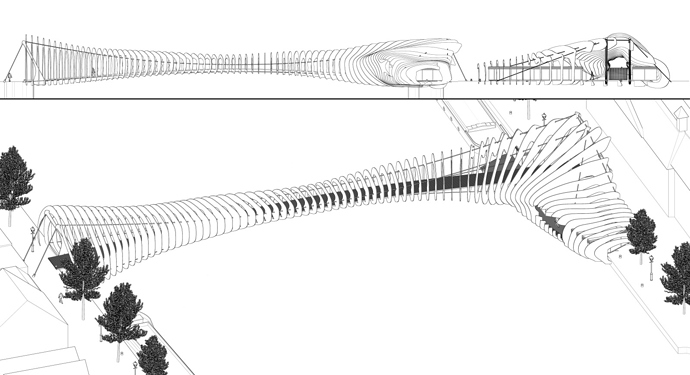 Very awesome! Reminds me of a leg bone. Was that the intention?

Not even mentioning the renders, that’s VERY cool, design-wise, just looking at the architecture in itself. Amazing work.

Design-wise the bridge looks pretty darn good from far away.
But from close it looks weird.
That’s probably because of the texture. Looks like a vine bottle cap.
Ad the fact that these parts look really big and black from up close.

I’d probably put some white material into a metal frames to form these instead.
But I am not sure about that either…

hm wouldn’t it make an awfull sound if wind is blowing along those edges? There is a “Klangbrücke” where the sound was by design around here which had to be closed for a while after build before some security issues had been solved. Also a pedestrian bridge but for a park around the river “Wurm”.
I am right seeing three welcome bending figures at one entrance?

But from close it looks weird.

This is in Holland, Marijuana is legal and weird is the norm. ;D

Really nice work! If they choose your design will it make Amsterdam a bit more modern. I’ve never been there (feels ashamed as a Dutch one), but some areas of Amsterdam are quite old. The DOF sometimes makes the illusion it’s a miniature, it’s very strong.

@Farmfield Thanks for such nice things you say about my country.

Also, Viralata shouldn’t be feeling ‘attacked’ or anything, he’s from France…

Really nice to see cycles used for something like this !

@Farmfield Thanks for such nice things you say about my country.

Also, Viralata shouldn’t be feeling ‘attacked’ or anything, he’s from France…

For the Americans, Europe (and europeans) is weird, period, hehe - bit it’s also the other way around and then some. ;D

I myself actually has strong wallon ancestry, not Dutch though, but close enough, hehe… ;D

Thanks all for the comments. For the wind noise, I must admit I didn’t think at all about it.
Here is a small upadate, with metal around the wooden parts, I think I like it (but needs somme work on material)

Very nice concept and renders, i don’t know if it is feasible from a structural stand point, but i looks really great and it is a very interesting approach. What you have there is a suspension bridge without hangers, unless they’re embedded in the wood pieces. But on the other hand, wood has good resistance to tension if parallel to the grain, it could work.Again, very interesting concept.

Thanks all for the comments. For the wind noise, I must admit I didn’t think at all about it.

That would be very cool, though, the bridge singing in the wind. Could also be very eery on a dark night… ;D

I for one think the design is very cool. I don’t know if it’s viable from an engineering standpoint, but it’s very cool visually. However this project goes I’m sure you will be remembered for presenting this idéa, that’s the most important thing - making an impact.

Thanks all for the comments. I worked a little bit on the renders, for an animation:

Here is the first test of the animation, the works remaining is still big, but I improve it slowly:

Is there a reason why the video is moving so choppy?

Yes: it was too long to render, so I rendered it at 12 fps as it is just a wip

Some new renders, with a little bit of compositing: 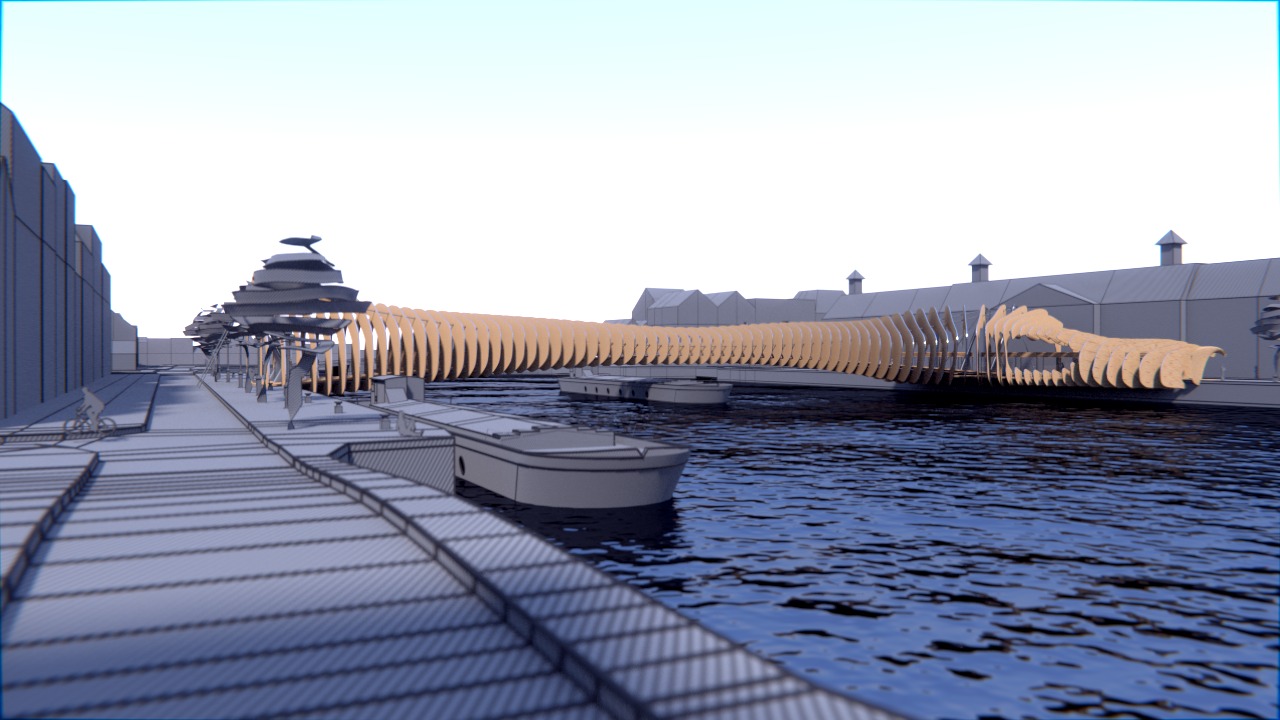 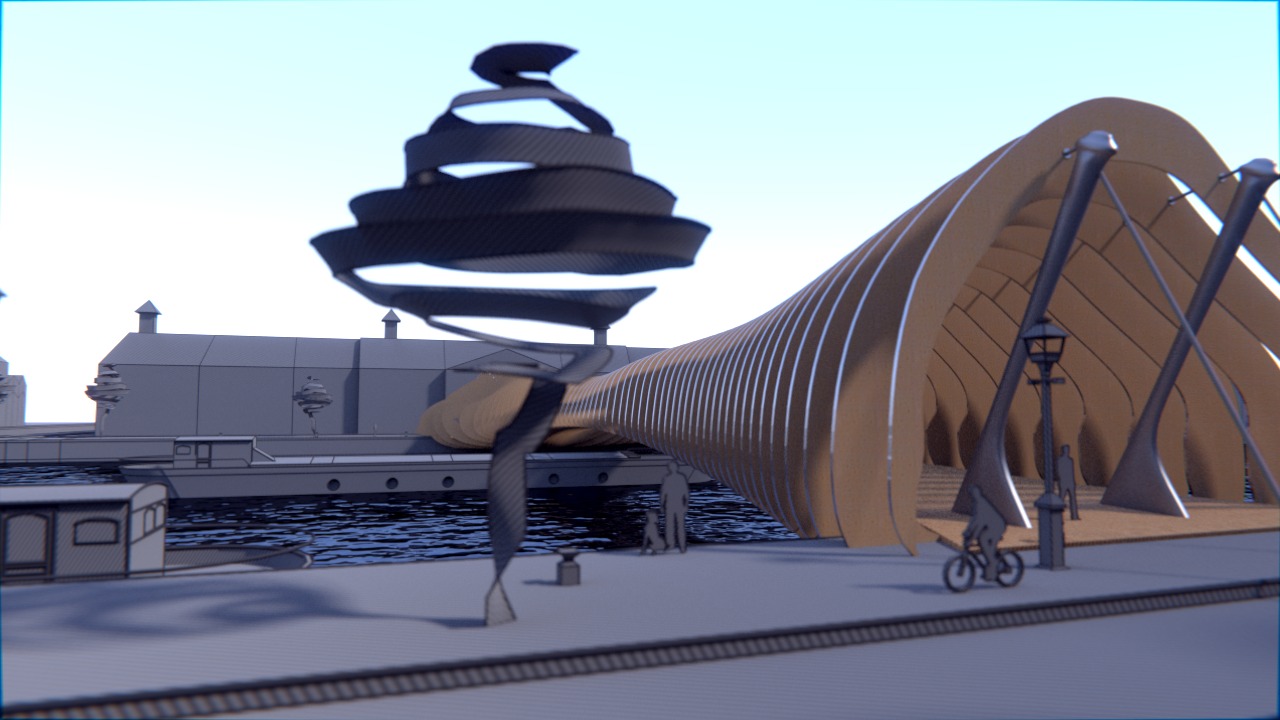 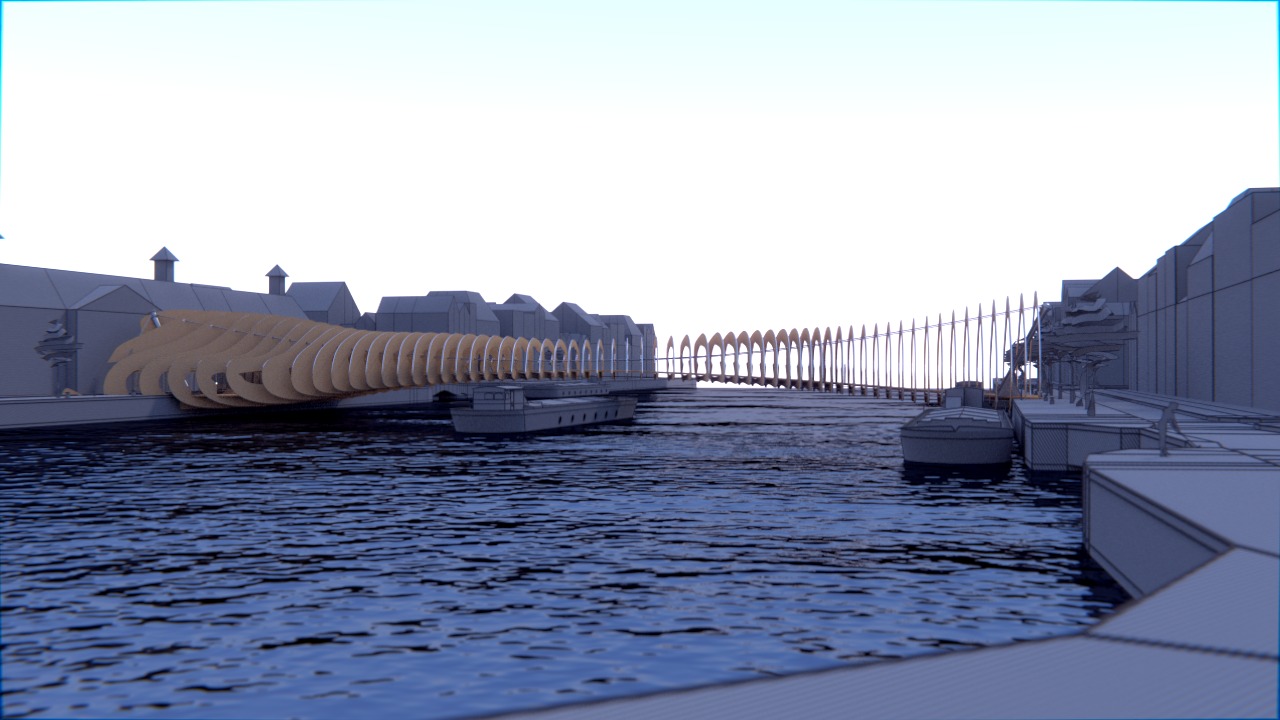 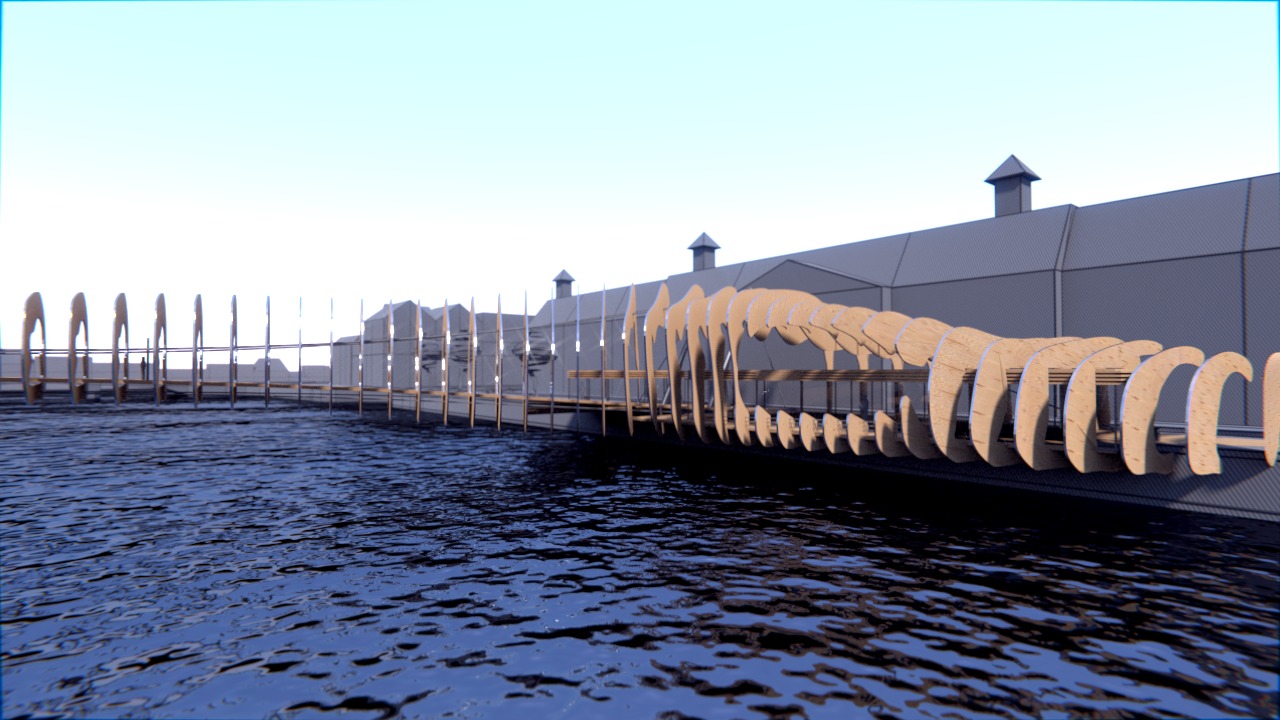 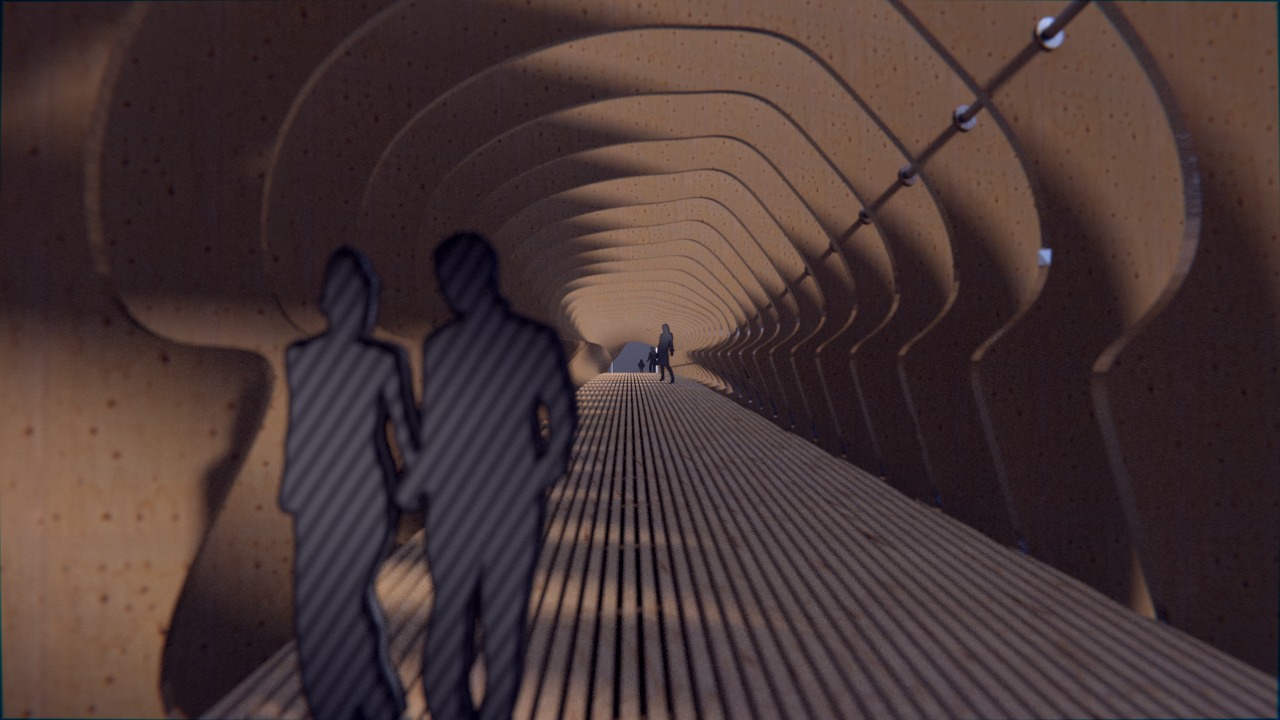 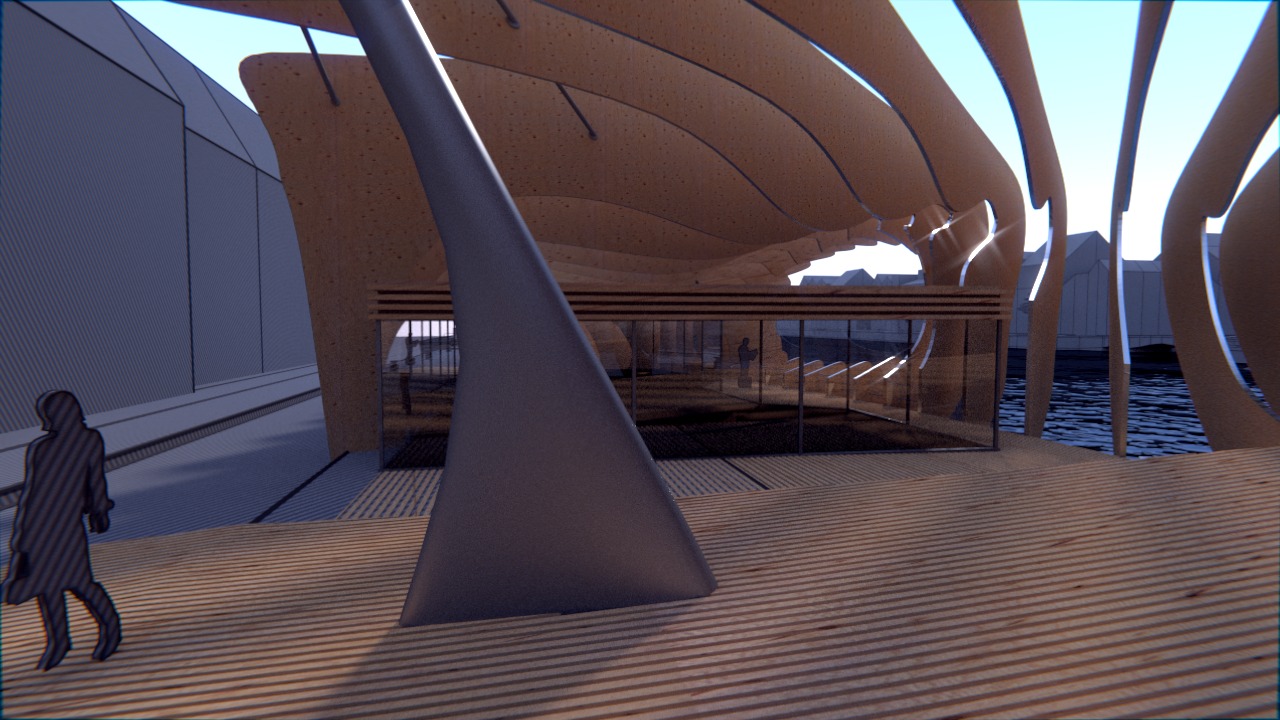 Did you use sketchup for the modeling or only Blender ? What about the drawing like renders ?

I used only blender. For the render I used a wave texture and the addon that changes a mesh into a wire curve to get the edges.