I was trying my hand at relief sculpting. The sculpting I think I have down pretty good. I could use some more practice but the compositing I really need help with. Any comments or suggestions to help me make this look more like a copper penny would be welcome. 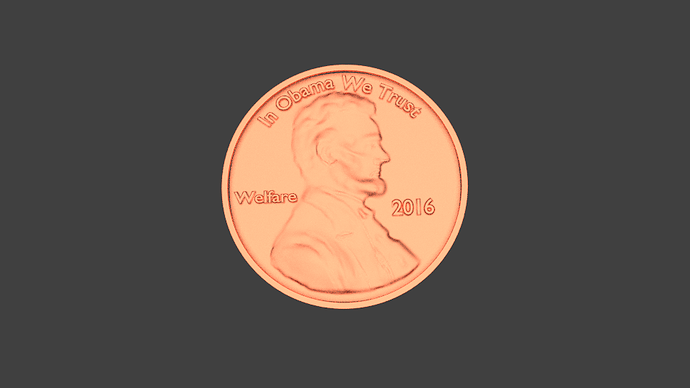 HaHa! Love it! Now, I hope this thread doesn’t get ugly…

can you explain how you did it ?

Ricky,
I was wanting to actually sculpt the relief instead of just using a texture. Although using the texture would have been a lot easier. I found a photo of a penny and used it as the background. I added a plane, subdivided a couple of times, then added a multires. modifier. Ran the modifier up to six for a nice close mesh.
It would have been nice if blender had an option where in the solid edit mode you could adjust the transparentsey and see the background through the mesh.
But I couldnt find how to do it so I used my mesh in wire frame mode, so I could see the background through it.
First thing I did was to use the sculpt mask to trace the area I didnt want to mess with. Took a little jumping back and forth between wire frame and solid to get it done.
Then I established the key features, like chin line, ear, eyes and such, by using a small brush of inflate with weak strength. Just enough to see.
Then moved the mesh so you can see the background and mesh at the same time. For comparison purposes.
Then back to the solid mode and using inflate and deflate, smooth in different sizes and strengths, work on it till I was happy with it.
Did that help?

sorry never been a big user of sculpt mode
too high res for me !

ok so you did not use dynatopo here !

now if i go into sculpt mode i don’t really see the mesh
what i’m i doing wrong here !

did you see the thread on dynatopo there are some nice dirt texture using vcol !

Ricky
No I didnt use the dynatopo here simply because I wasnt planning on animating it. I dont know what the poly count on it is, never looked, but I know it is high. If you wanted to animate it or use it in a game then you would might need to lower the polys. This was my first time using the sculpt mode in this fashion, and I kinda liked it.
To see the mesh in the sculpt mode you have to be in wire frame instead of solid.
The mesh its self in edit will not show the multires. modifier either. All you will get is the basic subdivision-subsurf mod. and only if it is applied.
Apply the subsurf and the multires mods and you will see how tight the mesh is.

the poly count is close to 80,000. and that is just the plane that has the face sculpt on it. The text and edge will make it more, but not by much.

It would have been nice if blender had an option where in the solid edit mode you could adjust the transparentsey and see the background through the mesh.

Use the “front” option in the background image settings

Thanks Pappy,
But I’m probably doing something wrong. It didnt work for me. Im using 2.64 and I tried all variations of that option and it didnt work.