Just wondering if i could get some focused critique on these renders. (WIP thread is in my signature under Optimus Prime) 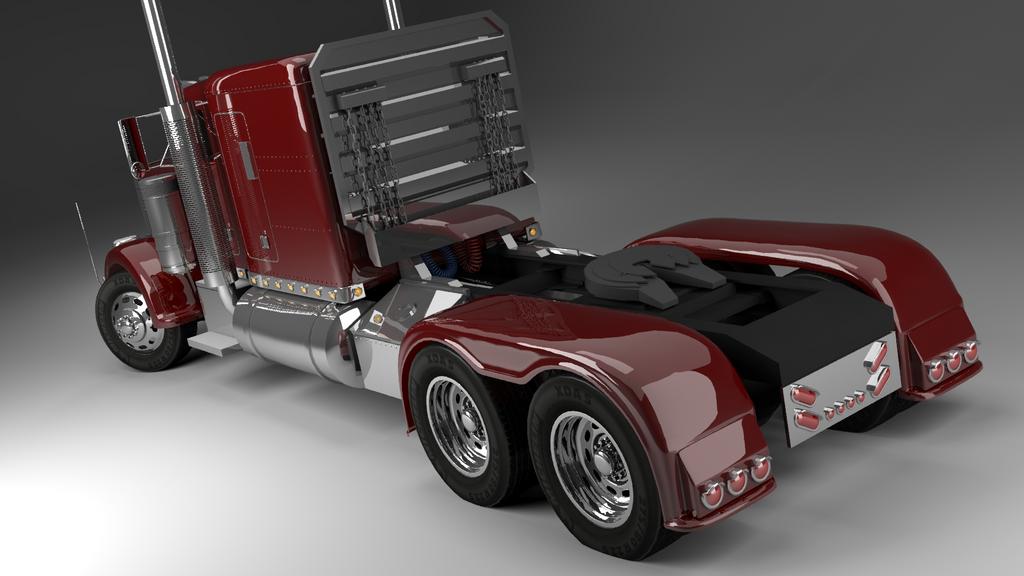 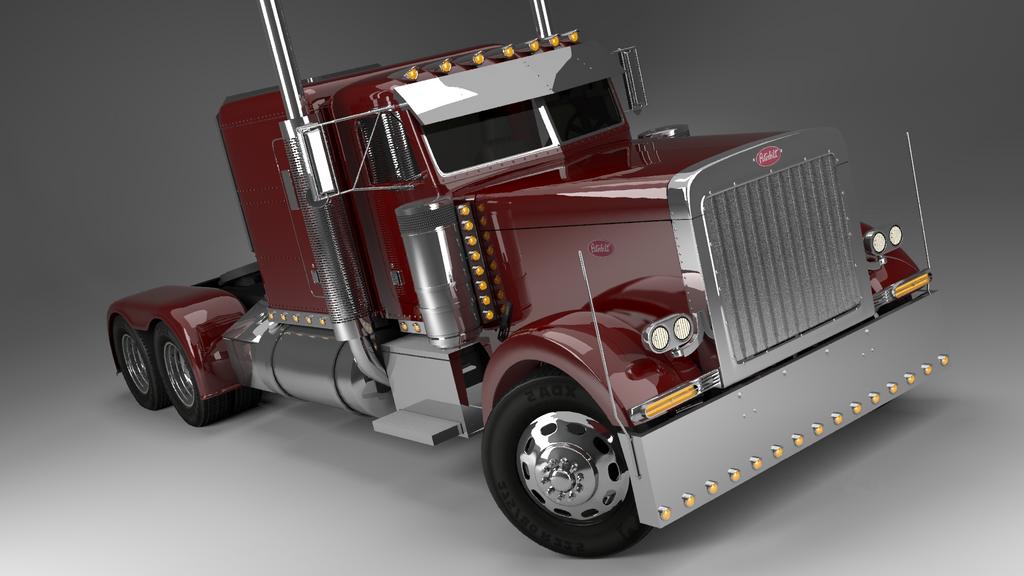 I like it. My 2 cents is this.
Dirty it up a little. Put a few scratches on it. It’s too clean.
Beyond that, one word.
Awesome.

Second that. But instead of making it “dirty”, you could also set up some studio lights and make it sparkle

The backside, where the hanger goes looks strange, like it’s plastic. Maybe you could work on that.

Dirty it up a little. Put a few scratches on it. It’s too clean.

A couple things on the model if you’re looking for accuracy.

There’s a little mudflap that hangs off the front fenders, on the top of the grill there’s a handle to open the hood, the air intake canisters look a little too long and the doors on the sleeper are on the rear instead of the front.

Overall its a good looking model.

Oh, and one suggestion, you might want to look into a diamond plate texture for the headache rack and battery/utility boxes under the cab since that’s what they’re usually made out of.

@cotejrp, sidcom
this is a studio render. It is supposed to be perfect. If it were in an outdoor scene, of course I would dirty it up.
@uncle entity
this is part of my current wip project of modelling optimus prime. As far as accuracy goes, it is pretty close. The peterbilt from the movie has one sleeper door on the rear, and one closer to the front. Sorry about the treadplate texture, for some reason it did not show up in these renders. Will check it out. As for the handle and air intake, i will take a look at it.

Oh wow, this is an awesome job on this 379. I actually own a black 379 which I drive for a living. You have done a great job on the details. Just a few minor crits from me though. And these are just minor things that you may not want to correct due to the requirements of your project.

Your dual headlights seem a bit to small also. There is also a seam running down the middle of the top of the hood that is about 3 inches wide(but I don’t think this is needed here). Also, about the sleeper doors. Those can be ordered in just about any position the customer wants. I have the 73 inch stand up sleeper on my truck with one exit door on the passenger side towards the rear and one small access door on the drivers side, also towards the rear of the sleeper. The stand up sleepers rise above the cab much more than the flat-top in your rendering. The flat-top is the most popular style for the customizers. And most custom 379’s have the larger stacks instead of the stock mufflers and shroud that you have shown. The larger straight stacks really set off the looks nicely.

For some reason on the rear view it looks just a little to narrow up by the back of the cab. Maybe that is just me though or the angle of view. Other than those few picky things it is a fantastic job.

I’m wanting to make a blender 379 also. I have some custom parts I want to manufacture and I would like to see them on a render such as yours. Right now I’m just working on paper drawings. I would be interested in buying your blend file if I could. This would save me a huge amount of time. That way I could just add my parts and modify your file to show the higher sleeper. I really don’t know what a file such as yours would sell for though, so if you are interested, maybe pm me a price and I might be interested. I really don’t need the drive train pieces. Just the profile bodywork with tires and rims would be fine.

hey thanks for the input, its good to hear that my truck looks good from a real truckdriver.
I have fixed the diameter of the air intakes, moved the sleeper doors to the rear (and had to re-uvmap it :mad:)
Also i made the smokestacks wider, as well. As for mudflaps, this is a custom peterbilt, and on my references there is not a single mudflap. I will PM you regarding the blend file.

the model looks excellent, but i’ve worked on a hell of a lot of trucks so i have a few comments.

the deep feeling to the red is very good. the paint they use is nothing like car paint. its got physical depth to it, far in excess to a few coats like a car gets. you’ve got this quite well i think. however the front wheel arch looks like its a little flat and the bevel from side to top looks a little small in radius. the model might be perfect, but the lights or texture make it look a bit flat. its a small thing to be sure

the chrome material you have looks too white. try making the diffuse dark grey/black. again, this is a question of depth in the material. the red has it, the chrome is a little thin looking.

finally, there doesn’t seem a lot of black going on, the lights are nice and bright, but theres a lot of mid grey in the reflections, i don’t know what the scene looks like, but a ground plane, background, a dark world and your light scources should make this much grey - this is very related to the chrome comment…

This is very high quality, only things that bothers me is the front bumper; it looks very sharp, have you bevelled it?

@dvandamme i have changed the chrome material to a dark grey diffuse, and also darkened up the background a bit, although im not sure what you mean by the fender being off. Can you maybe mark up my render to show me? thanks
@guiseppe thanks, i have bevelled the bumper.

ive tried to show what i ment… we’ll see… 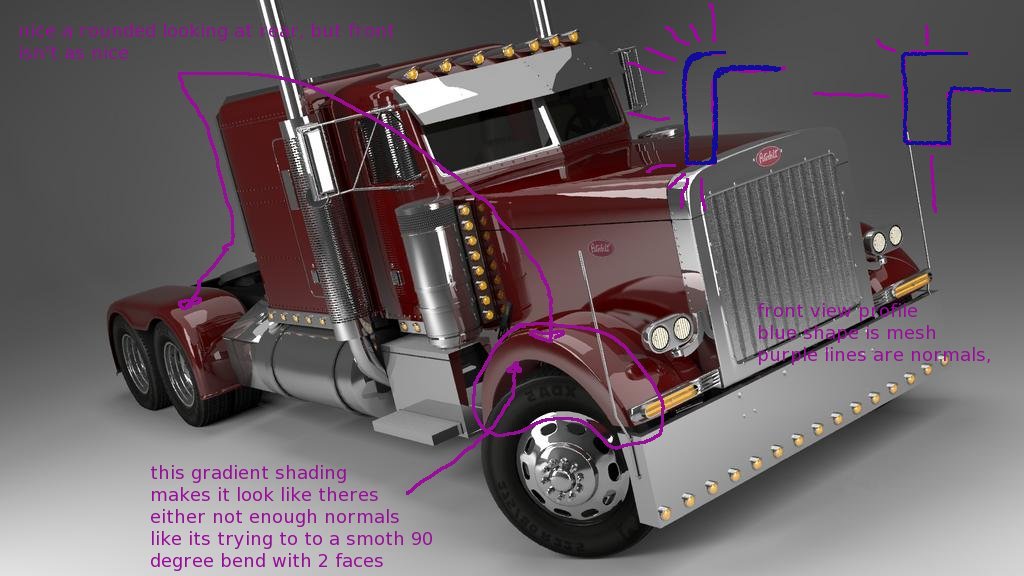 i see your point, well said. I will fix this tonight.

here is my update, i have changed the sleeper doors to the rear, changed the chrome material, moved lights around, and fixed the front fender. It was suggested to darken the scene, as there was “not enough black”, which is the reason for the less lighting. Personally, i liked the lighting better before, but lets here what you guys think. 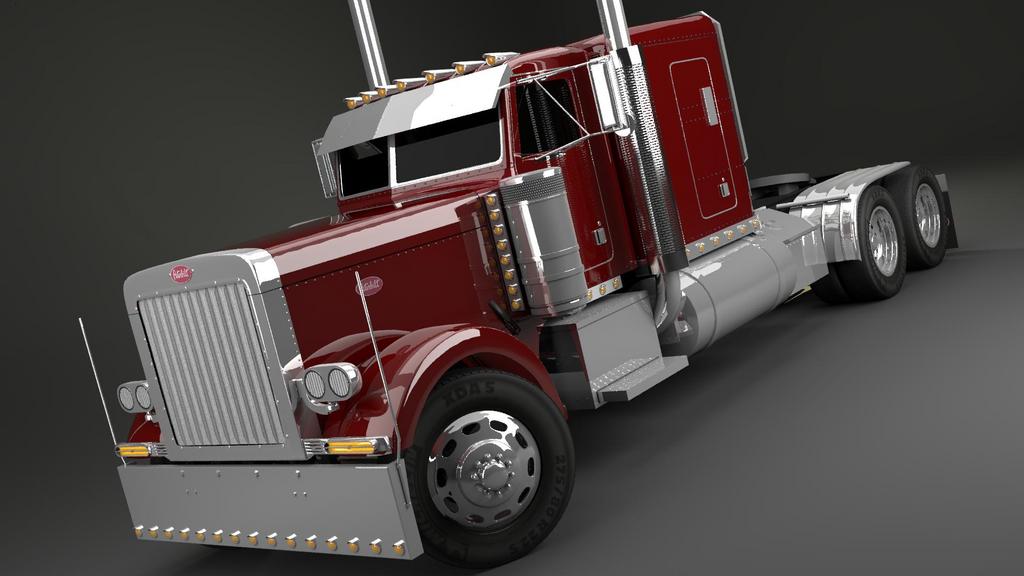 I cant make any more crits

thanks!, but i still think i need to re-work the lighting a bit.

let me know what you think 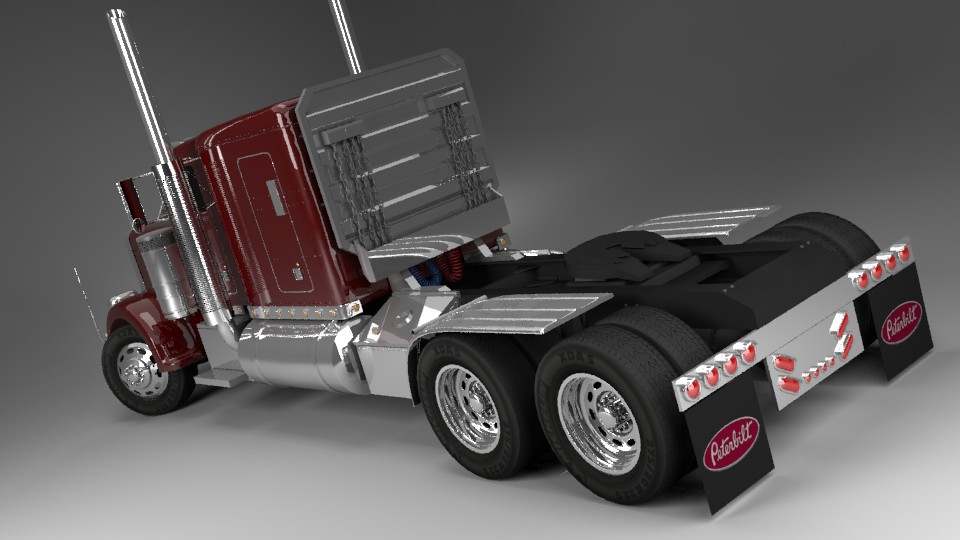 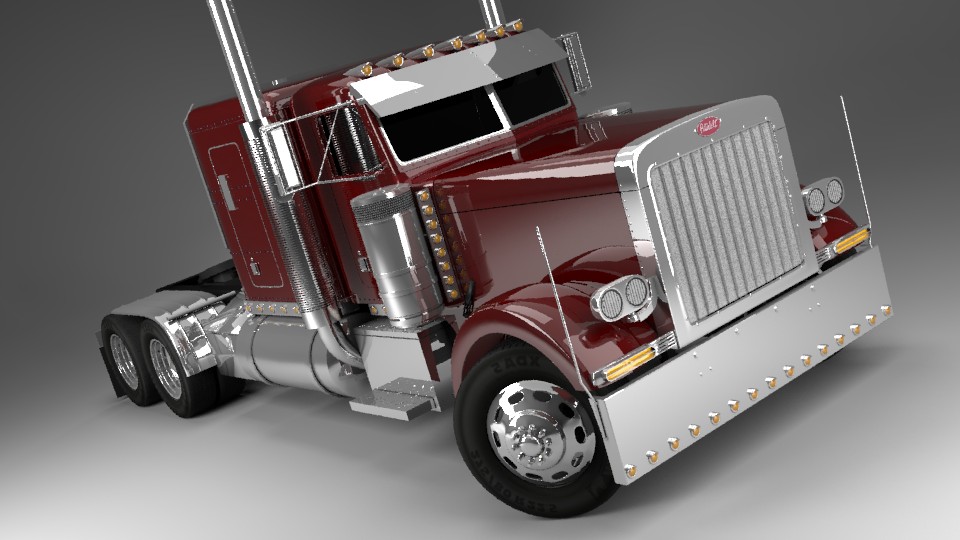 very cool indeed. im convinced the front fender issue i pointed out is now a lighting issue as the other side is perfect.
i think the red rear guards had a nicer balance visually, but the metal ones would be more likely used, so perhaps having the red guards in place but with the checker plate as a bolted on accessory?not too sure, but i would definitely extend the guards, what every the material, over the full length of the wheels, all that tire area kicking up road crap would drive most truckies insane with the chips and cleaning that would need to be done (at least the clean types i knew)…
personally i think the darker image has more bunch, but its your work, so if you like the lighter one, go with that. this is really just personal preference.

ok, ill try to take a look at that fender issue again.
Also, i added the checkered reflectors above the mudflaps, i will update later.
And as for the rear fenders, i will use the metal ones, as they are more realistic, and because everyone wanted mudflaps, and i couldn’t put them on the custom fenders.
But, as far as extending them goes, that is the proper length. Look at the reference pic: 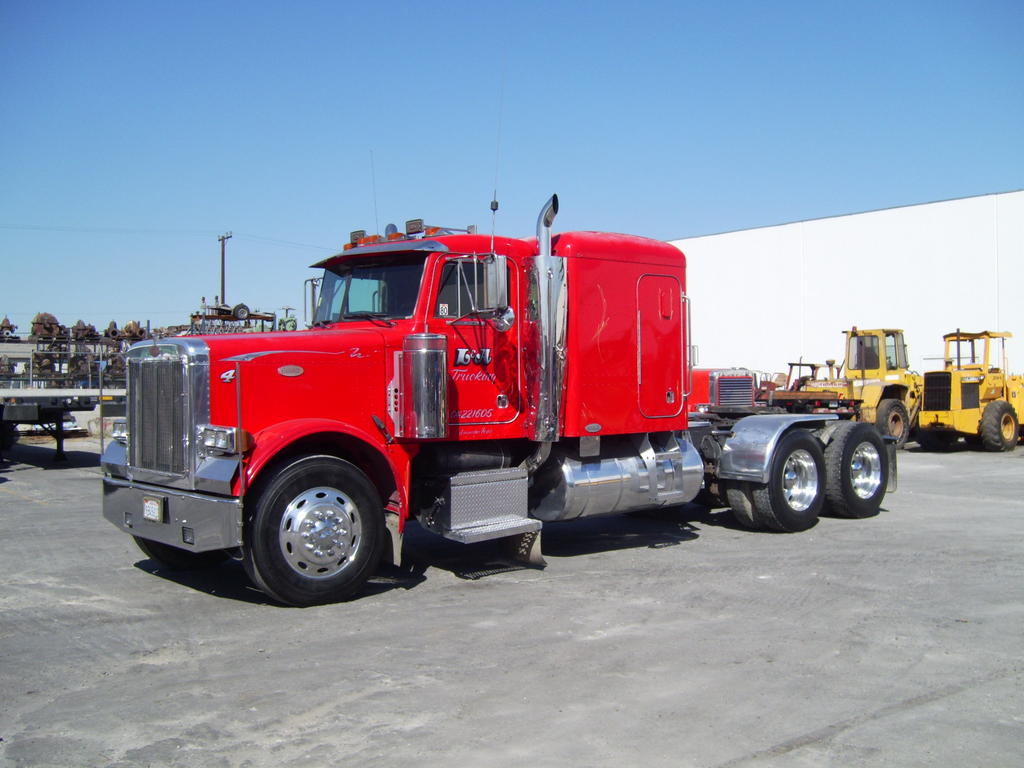 nono, i didn’t mean you needed to fix anything… its a trick of light, not a modeling issue, i fully consider your model finished… i haven’t seen a wheel guard that looked like that before, though all my truck experience is in australia, and perhaps we have different rules for it…