Hi,
This is my new project, just a small action, maybe adventure game.
My goal is to achieve the high quality gameplay similar to the Zelda and Tomb Raider series.

When Social posted an excellent example of planetary gravity Link, I decided to use small planets for levels like Mario Galaxy, this will save a lot of time in designing levels and avoid having boundaries.

Credits:
Everything was made by myself, except for the gravity setup which was made by Social.
The trees were made following the tutorials on http://www.yofrankie.org/download/
If you want to see a similar control setup check out Cray’s Third person template. 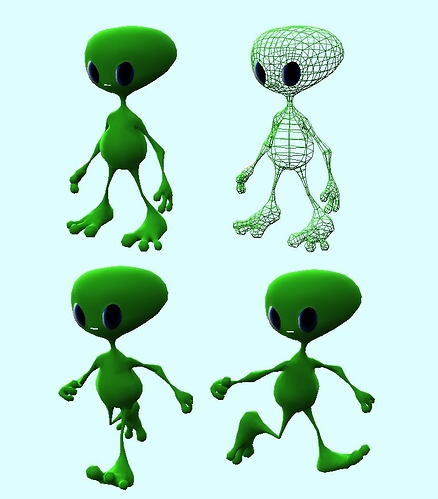 Wow! Looks awsome! I’m curious to know how you set up the world gravity like that (on a sphere). Good work

edit: aha! I just read your first post over and realized it explains the gravity. My bad!

Looks pretty great so far- my only suggestion is to smooth out the turning a bit, so the character doesn’t just pop from one direction to another.

Looks great though! Will this be for the competition? Because it’s an excellent game for it =)

Captain Oblivion, Thanks, I just got smooth tracking to work thanks to Social. Link

-[Killer]-, Thanks, The trees are very unoptimized with a lot of alpha mapped planes, without the trees I get a much better frame rate.
I’ve noticed that GLSL materials handle alpha mapped textures a lot less efficiently than in multi-texture mode.

I wasn’t planning on entering the competition when I started this so I don’t know yet. 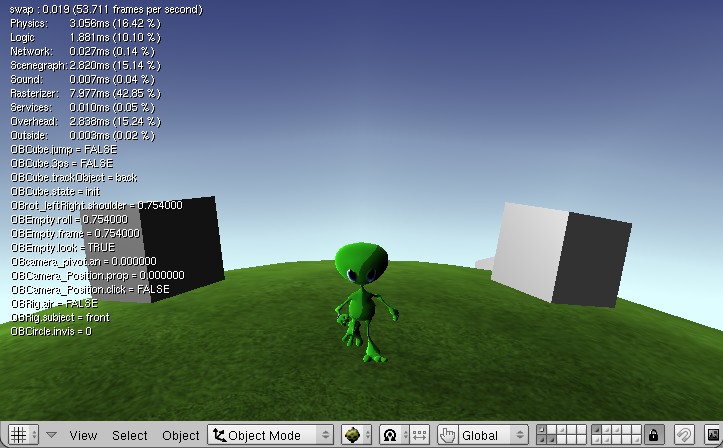 This is nice! haha…I was planning on making a mario galaxy-esque game after I’m done with my side-scroller game and got a new pc that can handle GLSL. (I don’t have a computer right now…haha)

But I guess you beat me to it. Looks nice! Remove the trees though…haha…They eat up processing speed. (I’m all up for optimization, seeing that I’ve been making a game using a Pentium III computer…)

oh! this was a surprise to see!

That animation is great. The control looks fun, like something I’d want to play.

My thought for the moment, is that it might look a little too realistic? Regarding colors and the tree style. Maybe just the tree style - because the setting is so fantastic.

Though, I’m really excited to see the world filled with objects. The look might even out then.

I’ll be watching you

Looks fun and creative! Can’t wait ti test it out

Awesome. I just started working on a “planet game” a few days ago too. I’m glad to see other people were randomly inspired by Social’s planetary gravity example.

Do you use the same “lock and shoot” that you had in your previous alien game (see on Vimeo)?

I will be watching that thread!

jinthan, Thanks, I will probably make a non GLSL version because GLSL materials really hit the frame rate, even on my pc.

+peter, I will definitely work on making new “more alien” trees, thanks!.

thudworks, I hope I don’t discourage anyone else from making a planet game, I’ve never played Mario Galaxy and I’m sure mine will be much different then anyone else’s. Good luck with yours!

cray, Thank you, I thought about using a lock system but decided it would be better to allow the player to have control over where he shoots. plus its easier:D

Thanks everyone for your comments!

Wow! Looking good… are you using a true cell shader in that last shot? Or toon shader?

I believe a true cell shader runs a lot more optimized than the toon shader (correct me if I’m wrong?)

Love it. The character looks so cute. I agree with +peter about the trees, they look too real compared to the cartoony character.

Why not make different planetoids on the same level, so if the player jumps high enough, he’ll be attracted by the other planetoid’s gravity and be sucked towards it. Could make for some crazy combat.

Hi PhilB,
if I remember well, the script provided by Social aligns the player on the vector coming from the center of the planet.
What happens if the planet is not a perfect sphere?
Do you have, in your game, the same pb as seen on the attached image? (see, in blue). 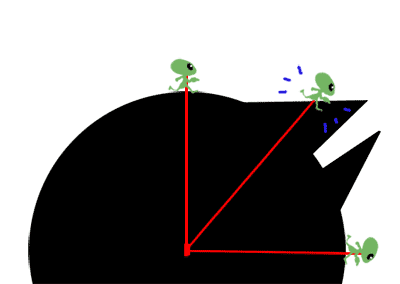 It seems to me that if the character aligned to surfaces instead of gravity it would look odd- for example, imagine in most flat games (simulating the character pointing in toward an extremely large sphere) characters don’t tilt to be perpendicular to inclines, or they’d look like they should be falling over when they go up hills.

Yes, you’ll want to use a gravity script, I can’t find mine, I’ll try to make a quick one tonight if you want.

Hi Cray, thanks for your comments.
I see that problem the same as Captain Oblivion, I think it looks better if you think that he’s running running up a hill. Although I do have a problem getting his feet to align to the surface. 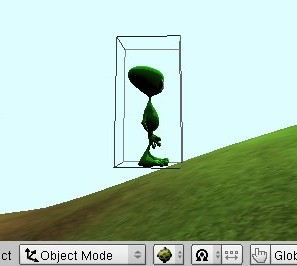 Realtime IK support in 2.5 may help a lot with this and I may need to use something other than box bounds, I’m working on this now.

What happens if the planet is not a perfect sphere? 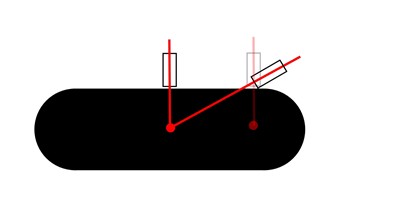 I remember playing an example someone posted here a long time ago where you drove around the outside of a torus, but I don’t know where it is.

That would be cool if you did -[Killer]-, and cooler if it solves the oblong planet problem and I’m sure others would find it very useful.

I don’t know, what’s a true cell shader?
I’m using the toon shader, here’s my setup if you want to see it
edit: I forgot to mention I’m using one hemi lamp and one only shadow spot lamp, not completely satisfied with the setup yet, still experimenting.

The thing is, when you use the toon shader, it’s calculating it for individual objects, a cell shader mass renders the scene.

Here’s a blender tutorial I found a while ago that explains how to do it:

It looks a lot more toon than your game, but if you know how to code OpenGL shaders you can modify it to suit your fancy