Hi there!
I’m trying to create a physics animation that will be exported as an animation to the IPO and get rendered.
All I want is to have a bunch of cubes that get hit by a sphere and fall apart (using Blenderes GE physics). Something like that: http://www.youtube.com/watch?v=nwe11y5_Us0
My issue is that I want to have a single image covering the side (one side) of all of these boxes. And I would also like the image to stay (stick) to the boxes after they fall apart. I think that it should/could be done by UV unwrapping ever box cutting my image in small parts and applying each image to the correct box. Truth is that sounds tooooo boring (there will be lots of cubes). Since I’ll be rendering this (not for a game or anything so UVs could be avoided) is there any other way of doing this (like projecting the image or something). Is there also possible to have one texture on two (different and not connected) objects?
Any help/info is welcome!

I wrote two companion scripts to handle just that.

One script was in after effects. It would take a single comp (ie your single image) and chop it into a grid and render each element of the grid as an image or movie. Then I wrote a python script that would create an array of cubes and map those generated movies to the face of one side of each cube.

With this approach you can end up with a lot of assets for a scene. It did work, but was a pain to setup.

I did not know about texture projection using empties at the time. You may be able to get away with that.

Give the attached scene a try.

Move the empty and the texture will move across the surface of the cubes. If you scale the empty, the image should enlarge. Projection is always along the Z axis, so if you rotate the empty only rotate it along the X or Y axis. 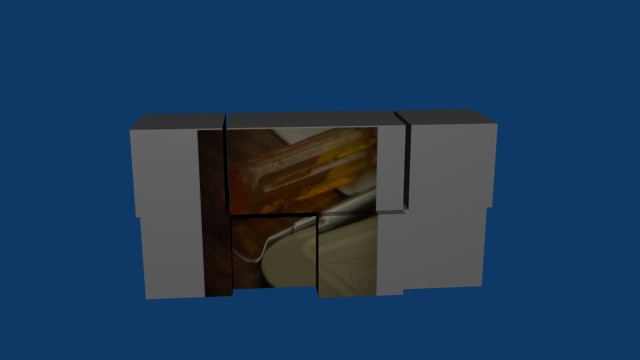