This is everything from blenders system console from opening blender, loading factory settings and enabling the addon: https://hastebin.com/iheforifoc.sql
I can’t access the python console though. The editor is always empty and gives me this error repeatedly when I hover over it

I can’t access the python console though. The editor is always empty and gives me this error repeatedly when I hover over it

Try to disable all addons or reinstall Blender (backup and delete config folder) and check python version in console using this code:

The issue was found. There was a random types.py file in the addons folder that was not supposed to be there. This caused some problems throughout Blender somehow.
Deleting the config folder als helped a lot!

Everything is fixed now and is working perfectly. Thanks

glad to see that you are using this addon julien ,

One of my favourite addons for quite some time

Hi roaoao. Popup Area is crashing blender, and Side Area is giving error in this build. I know it’s not an official build. But it would be amazing if you could help me fix this. Unlike the daily build and 2.8, it’s the only build with Weighted Normals modifier and Bevel Shader that’s stable and doesn’t change. So your fix would be a one-time thing.
Thank you in advance.

Hey Would like to share a custom build that includes all the latest 2.79.6 features (AO, Bevel etc), Weighted Normals modifiers by Rohan Rathi and several hackish modifiers by myself that have gone through quite a lot of production (gamedev). These include: UV Warp modifier Without From To targets set, it defaults to UV OFFSET mode (similar to Array, Mirror). Mainly useful for Gamedev where you have multiple instances sharing same UV space which would cause an error when baked (instead uv c…

I’m ready to enter in 2.8 dimension thanks to your latest upgrades

. But many of the old buttons seems broken, or when trying to add new ones appears the message “can’t add this widget” most of the tryings. What we might to expect from 2.8 the PME users?

Hi, @anphung
Where I can find sources for this custom build?

But many of the old buttons seems broken

“can’t add this widget” most of the tryings.

Will try to fix this in Blender 2.8 beta.

Thanks for the response, there’s a lot of expectation with 2.8 build, and is hard to image to use it without your add-on working fine. You have created a deep depency!!

Hi rao rao again question
im creating a macro
after i rotate the object ( modal ) i want to automatically press enter is it possible? 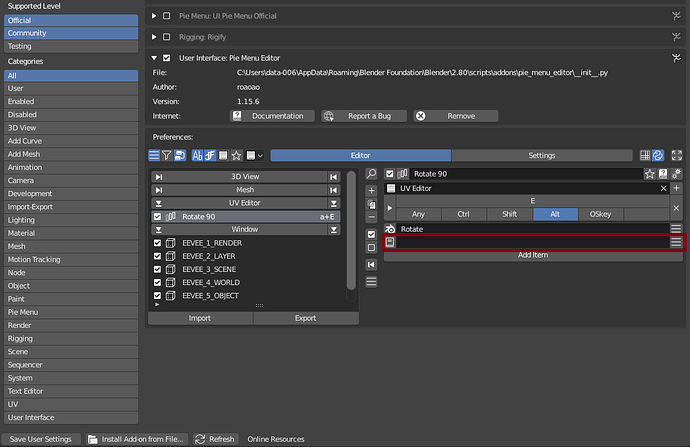 im creating a macro
after i rotate the object ( modal ) i want to automatically press enter is it possible?

Do you want to run some operator assigned to Enter hotkey?

hi there!
Im testing this with Blender 2.8. I love the plugin… but still a noob with 0 coding skills.

What im trying is to make buttons to put on my 3dview left side panel. But im having the following troubles:
If i try to put a check button (on/off), like the show grid one (show grid/hide grid), the code is ok but the button just… vanishes… its not there (in the toolbar). There is no way to see it or click it.

Any idea please? Thanks!!

How do you have two properties assigned to a single item?

Ok finally i solved my problem with the use of Stack Keys. I doubt there is a way to show different background color for the button depending in which state it is… but i can live without that

You guys that are trying this out in 2.8…what build of blender are you using. 1.15.6 doesn’t work with anything I have downloaded from the October 15th nightly build up to last night’s build for windows 64 bit.

I’m still on the Oct 10th build.
Just wait for the beta in 2,3 weeks. The new API should be done by then, roaoao can then release a new version.

Its working fine for me in latest 2.8 build version.

One more questions roaoao. How would you move between area types and space context in UV/Image editor? Trying to make a pie so I can go from any view to UVEdit even it View image was previously selected. For now I can only move to UV/Image editor and see what ever was already visible.