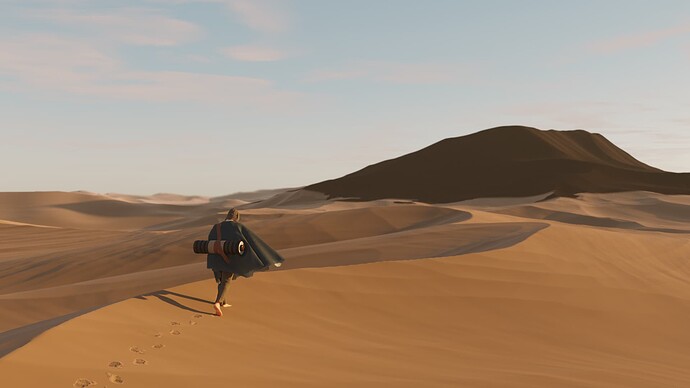 Hello! I am beginning a journey to world build a nation known as Minelepia. I have created a map of the country in a online map making tool, and I am going to flesh out the nation that the map represents, through renders and environments! This piece is the first step of that journey. It depicts, “Ilnero Vavis” or, “The Black Dune”. Its grains of sand are not the same as its beige neighbors, it is much denser and conductive. It refuses to disperse and meld into its surroundings, and has been around since before history was recorded. A sacred site to the people of Minelepia, people from all across the nation make the pilgrimage to its slopes, to bath in and submerge themselves in the magically charged sand. The pilgrimage is typically made barefoot, as the main religion in Minelepia believes the earth holds, and emits, energy that burns away sin and purifies the body and mind. The sand in the, “Vavis Wela” (Great Dune Sea) is believed to be especially strong in its healing powers.

The plan is to world build the nation of Minelepia on my twitch stream, allowing the viewers to participate in the documenting and creation of the nation. I think it will be a remarkably fun, and creative endeavor!

Constructive feedback on the render is very welcome, cheers!