Avast! New photos throughout the thread. 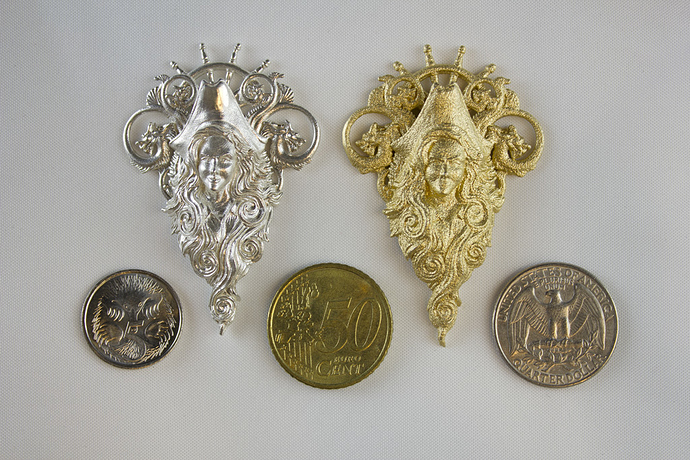 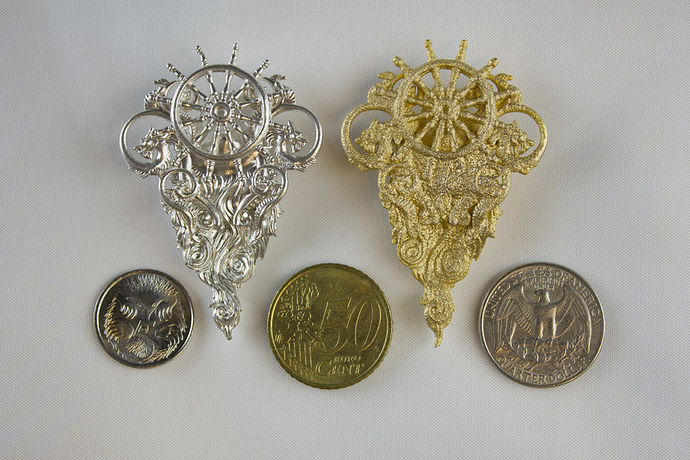 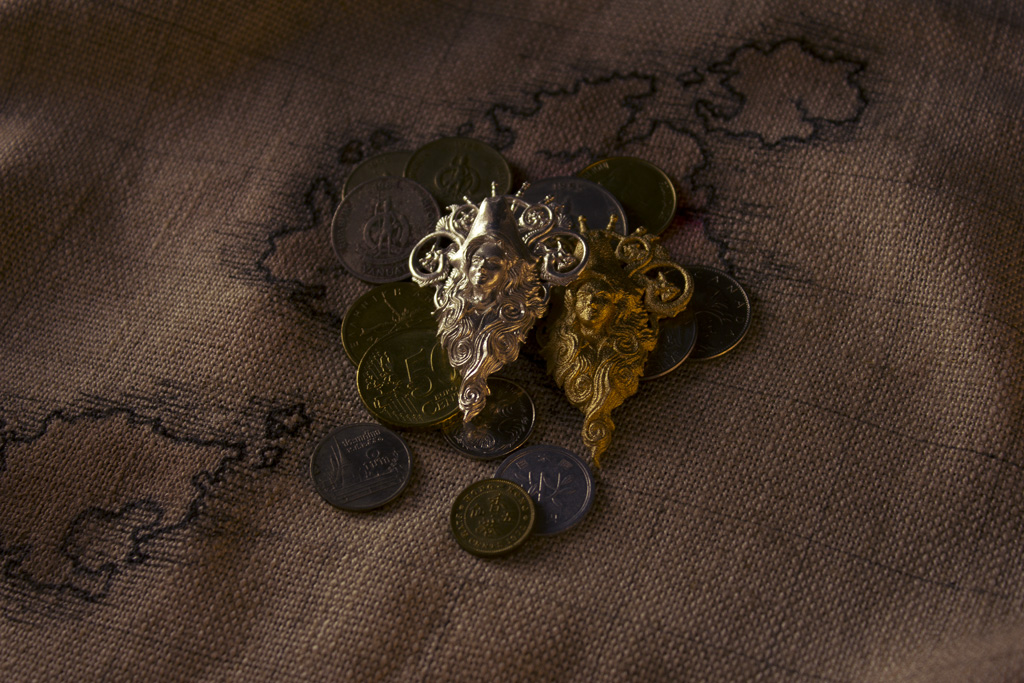 I’m still not quite used to my camera - or taking physical product shots in general - so expect more photos as I get the hang of things.
I’ve also got some more renders with Cycles, but it’s currently getting late here so I’ll post those another day.

The meshes were modelled in Blender, sculpted with Zbrush and printed through Shapeways. As you can clearly see, the Silver came out far more detailed than the Gold Plated Steel. That was to be somewhat expected though.

Once I get my Shapeways store set up, these will be available for purchase. Hopefully soon.

There be more details to come me hearties! 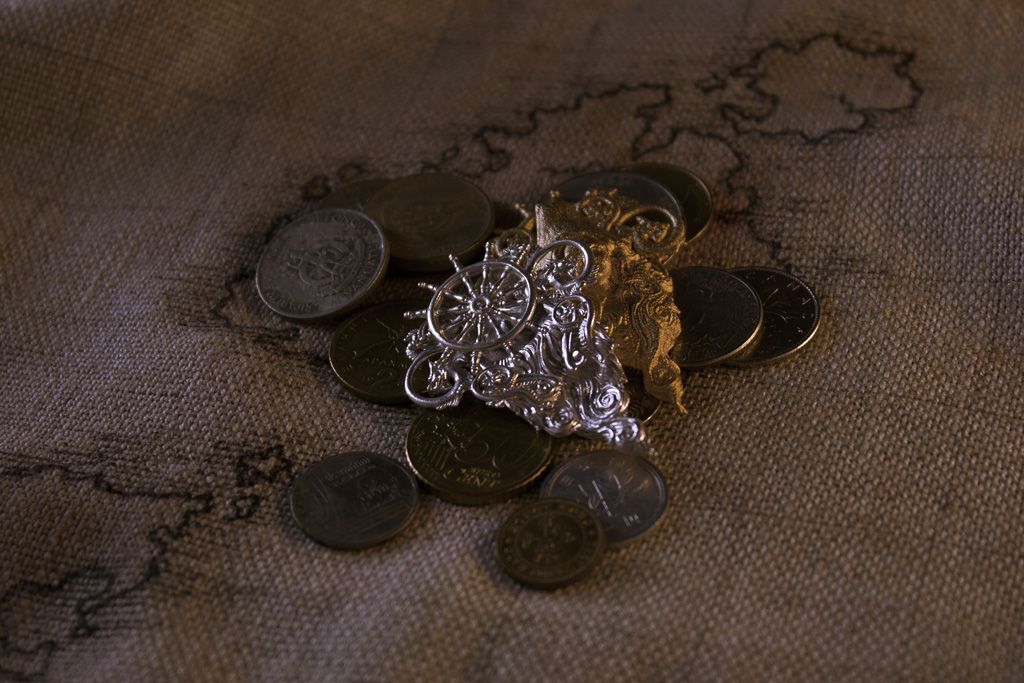 The next two are obviously renders on account of there being no gravity. 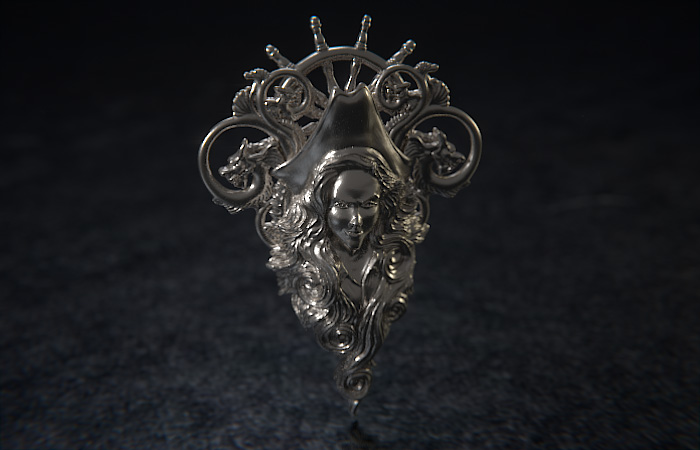 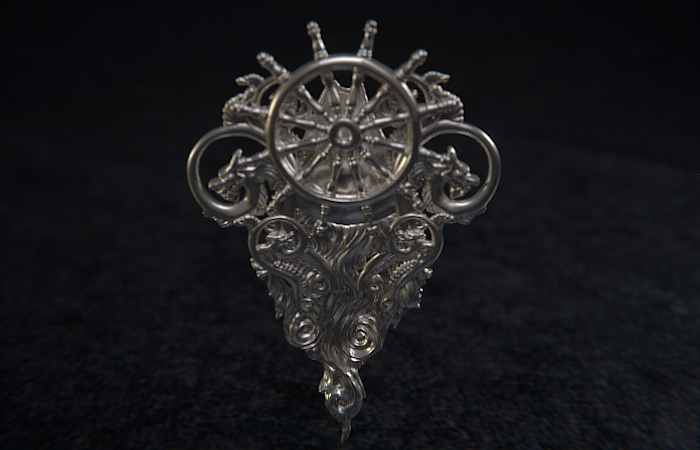 I’ve been thinking about sending some stuff to shapeways for 3d printing as well but it’s quite expensive. :eek:

I think you need to run a few more passes on that “gold” material to get the noise reduced a bit!

@Ben_Lind - It depends on the model, but compared to what this sort of service used to be (pre Shapeways for example) I find it to be very reasonable for what it is if you prepare the model well enough.

@Michael W - yeah… I knew the steel would lack some of the detail, but I was hoping for a little more definition of forms. Still, can’t complain too much about the laws of physics with the 3D printing of certain materials.

Yeah you’re right about it probably being the best service available for this kind of stuff. The silver has to cost a lot though, even in that size?

Great indeed, I became a fun!

@Ben_Lind - I’d rather not mention the specific cost seeing as I’m planning to sell them. However, if my option is to buy or rent the equipment needed (plus the cost of materials) then even the price of the solid silver is quite good.

Some nicer photos. Gaining an appreciation for how hard it is to truly show off silver from a photography standpoint though. The print quality on the silver really is quite something in person. 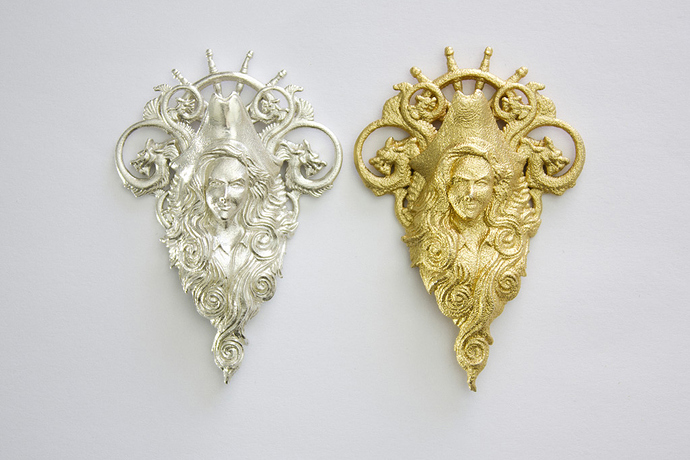 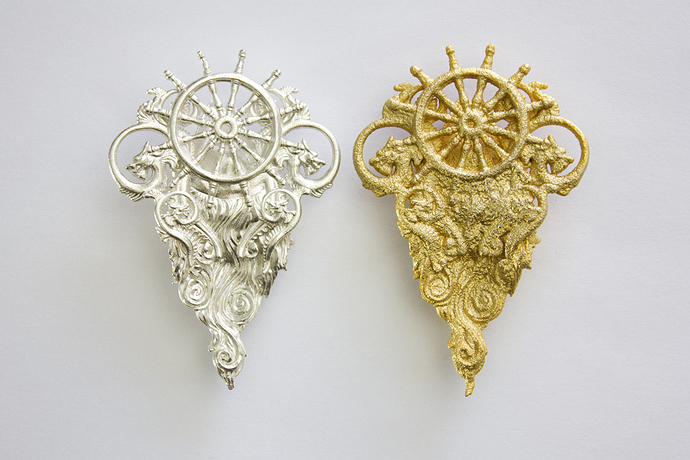 Split because of 3 attachment limit. 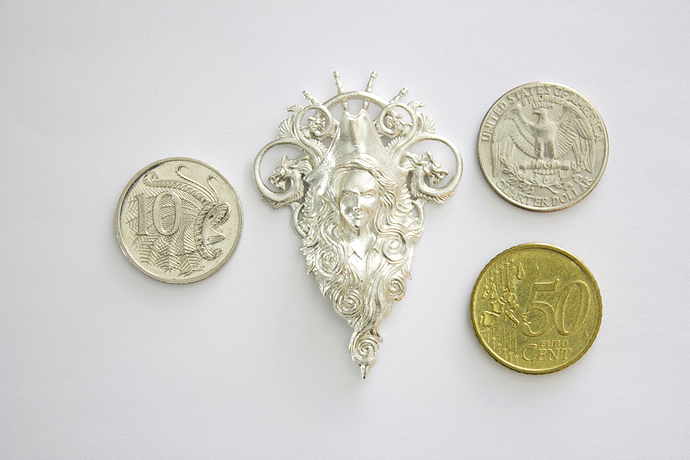 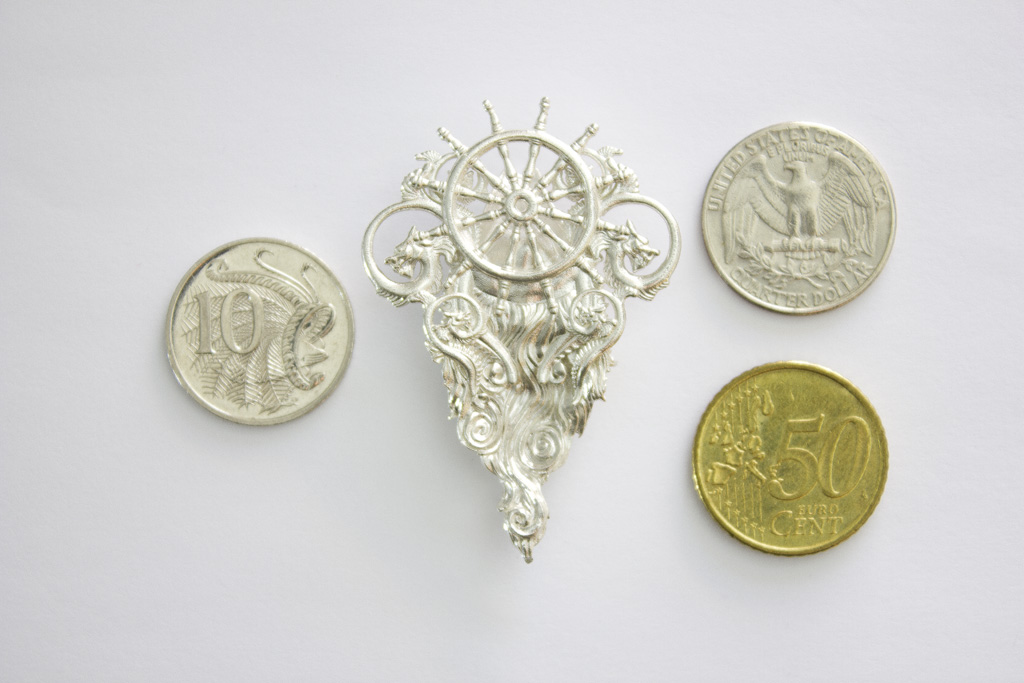 Also this is a good idea to show the model scale with coins from different parts of the world, this is more international

Also this is a good idea to show the model scale with coins from different parts of the world, this is more international

Exactly. Also, I realised that pirate loot would include money from around the four corners of the globe anyway… 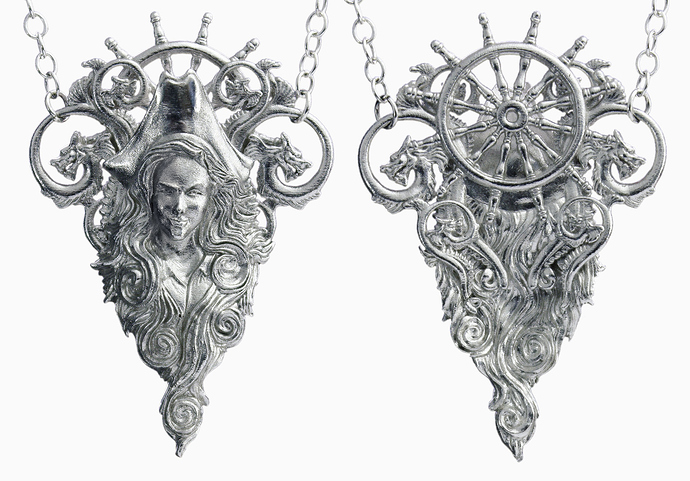 My shop be open on the Isle of Shapeways!

The above image is probably the most ‘honest’ about the finish of the product. This is printed in the silver, not the silver glossy, so I feel obliged to give customers the most accurate idea about the item(s) that I can. However, as you can tell from this and the other photos the slight pitted surface is rather minimal considering it isn’t polished.

Of course if someone wanted to polish it a bit once it arrived or post process it in some way, I’m certainly not going to complain. Would love to see the results actually. I just didn’t want my shop to be misleading.

Also - I didn’t record timelapses or anything, but would people be interested in any technical details from the process? It’s basically a straight modelling job, so not sure what details people would want to know. 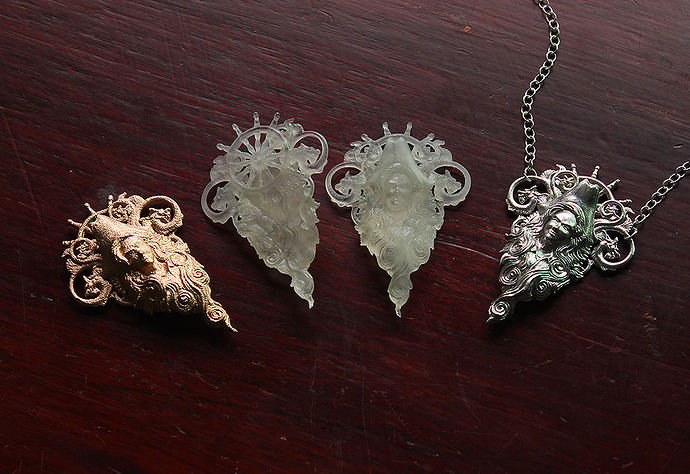 Not a brilliant photo, but Frosted Ultra Detail material from Shapeways is somewhat hard to see in person anyway. I’d clean and paint them at some point, but would rather get on with another design for now.

And the Cycles turntable in Silver / Gold:

The ‘Rendered Video’ text is because the video appears on the product page. Just want to rule out any ‘false advertising’ claims - even though the lack of gravity should be a giveaway as mentioned previously.

A bit of a thread bump, but still better than starting a new thread.

I finally got around to trying patina as suggested on the Shapeways forums. It will need a bit of practice to do it repeatably with a nice finish, but so does everything else worth while.

The other thing that will need some practice is using my Macro Bellows. Took a little while just to figure out how to get a decent focus with it, but loving it once I got that sorted.

I tried the patina (ie, darkening or colouring the metal) option with the boiled egg, which worked on the smaller rings I used as test pieces, but I couldn’t get any sort of even patina on the pendant. So I heated the pendant up to more or less remove that patina and tried some Liver of Sulphur which worked much nicer.

Note - while this post is mostly to do with the real world, there is a fair bit that can relate to Blender and CG in general here. Is silver a simple shade of grey with almost perfect reflections? Can be. I usually think metal comes out more interestingly (CG mostly, but real metals too) when there is ageing, dents, bumps, scratches and discolouration involved. If you pick up this pendant or look at it from a reasonable distance it is still mostly a reflective grey, but texture artists would still be able to add in a whole lot of history with the little surface markings and reflectivity/colour changes.

That being said, I did quite like the pendant being super shiny when I got it, so it took a while to take the plunge and decorate/age it with chemicals.

Could you please post a photo of the whole treated pendent? It looks cool but it’s hard to get an impression of the effect from just details/close ups.

@WombatCombat - Had the same request on the Shapeways forum… 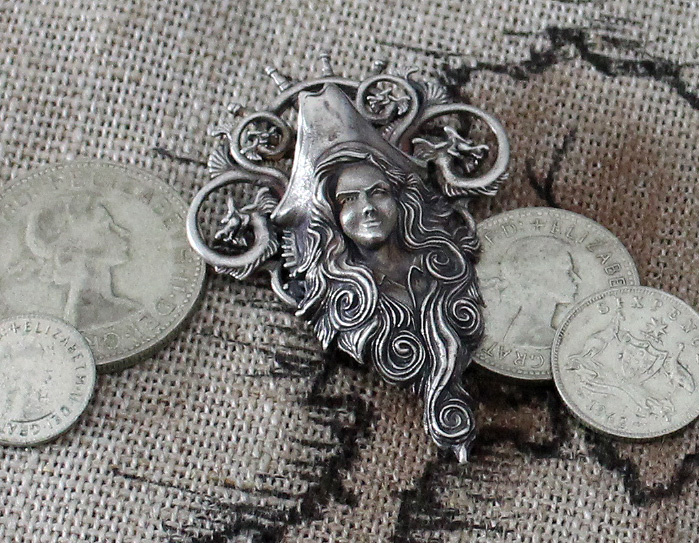 The photo isn’t that nicely focussed but I haven’t got around to taking any more yet. Battery ran out before I could take any nicer full ones.