I’ve recently stumbled across an site, not sure which country it is but its sharing an addon I created.
I currently sell this addon and it makes a good part of my income, tho I would be totally fine with a few people sharing my addon without my consent, they do not even care at linking the original creator.
I am really sad that some people just don’t care about who made something as long as they can download it. 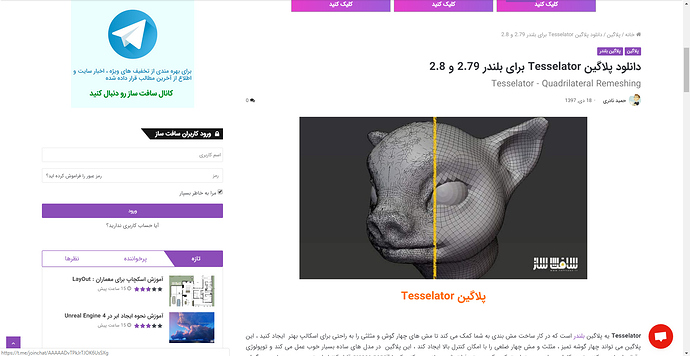 That would be a site in Persian.

Not sure if there is anyhthing you can do about this, given that all the Blender add-on .py code has to be distributed as source, and trying to create proper licensing scheme would be plain futile in this context.

I saw some chineese also, as I said they dont link to the creator what GNU license kinda requires.

I only am afraid of making invasive watermarks. I want it to not be pronounced but to stop them from using my pictures I have to.

Paste a QR code / link to the addons page somewhere harder to 'shop out?

along “commercial” version offer either older or limited free version & provide yourself with a donate button
most of times, with free version available, “piracy” looses interests cuz it’s more about getting stuff in arsenal, than really using it or profiting from - it’s pathological case like hoarding or having butt hurt after asking to be fycked

also, in a long run you get exposure and some more back

Study on estimating displacement rates of copyrighted content in the EU

Just give up, it’s not worth the bother. You don’t even have a legal leg to stand on because of the gpl, the expense of going after someone in an arab country notwithstanding. These people don’t care about you. Just focus on the customers who do.

Just give up, it’s not worth the bother. You don’t even have a legal leg to stand on because of the gpl,

Unfortunately, what the guy is doing is perfectly legal under the GPL and he is right. If he bought your addon, the license requires the providing of the source and it will let your customers redistribute the parts that is code. There used to be a lot of debate over whether or not Python scripts were covered (with the BF even thinking they were not), and it turns out they are because of how they interface with Blender.

One of the goals of the GPL in the first place is the ideology that software and plugins would be free and the money would be made from providing support, the latter part being how Redhat makes money from Linux. The BF has “some” monetization of Blender itself but not through code, but through the creation of assets and training material accessible via the cloud (which is not covered by the license).

That said, he comes from a country where piracy of all types of software is common practice, fortunately it’s still possible for people to make some decent money on Blender addons via Gumroad or the Blender Market.

You don’t even have a legal leg to stand on because of the gpl,

Unless the addon comes with .dll’s , written in C#. Just a bit python to link to the dll.
Or ? The .dll can be secured / encrypted or whatever is need so that 1 person can use it.

Today we tend to think of these transactions in huge chain store terms where there is no personal relationship and it tends to make us blind on how to leverage being a seller or client. If they want to pirate your software, meh no biggie, just go in with a link to a free trial that delivers all that they have and hint that there is a better thing behind the pay wall.

You’d have to include an exception for your library in Blender’s GPL license, which is unrealistic.

There are shady ways to get around it, but whether they’d hold up in court nobody knows.

I don’t want to send nobody to court or anything, it’s just a bit sad that they didn’t give the credits to me.

The trouble with these licenses and small creators is that the only way to fight for your rights is in court.

The funny thing is that I also host my add-ons on GitHub so they are technically free, anyone with acess to google can download my addons from my sources for free.

But they just share the addon zipped with a bunch of crapware and advertisement links together.

There used to be people scumbags selling renamed copies of Blender for money on ebay and such, and there was nothing the BF could do about that either, other than raising awareness that Blender is free.

maybe I should include support links on addon interface itself for further updates which links to the original sources?

Sure, that might be a good idea, although they’ll probably just edit it. Or maybe not. Maybe they’re lazy.

nah, they seem to lazy to even use their own images,I bet they don’t even try to install the addon…

Good idea. For demo / promotional imagery perhaps boolean the address into the mesh at a legible scale?

so disappointing… wish there was something we could do. Talk about stealing others livelihood…