The corner of the house could use some beveling, the reference corner isn’t as sharp as the model.

The metal bracket superkoop mentioned looks too prominent and too undefined with the same texture as the lamp bracket. In the reference, we see several abandoned lamp or sign brackets, which give the t shaped bracket some context, but in the model, it’s just there by itself, everything else has a current purpose.

Ah, well, I see you’re done but for the tweaking. Consider tweaking the bracket material to a less prominent color.

Thanks Orinoco, they’re areas I will definitely be looking at when I get round to finalising the scene.

I haven’t found much time this week but I’ve managed to add some detail to the cafe. The rest of the buildings detail will probably be done with textures.

A bit more progress.
The stone wall has turned out something like I wanted it. The road needs a lot more work.

Thanks joeab: Some areas of the stones texture are badly stretched, but I am planning on covering most of the wall with plants and tables etc. It’s been a challenge with the clone tool getting the stones on the top of the wall to fit the UV map. I then discovered you could move the UV points in the UV Image Editor to suit the image and it got a lot easier. If the plants that sit in front of the wall don’t cover the bad areas I will no doubt have to re work the wall image. Up to now it’s been a good learning exercise.

I promised myself I would work on the left-hand building, but ended up drawing the textures for the road and steps.

I still cant get motivated to texture the left-hand building, so I have added some tables, chairs and railings to the court yard. I suck at modelling plants though, It’s going to be difficult filling this with the range of foliage it needs. 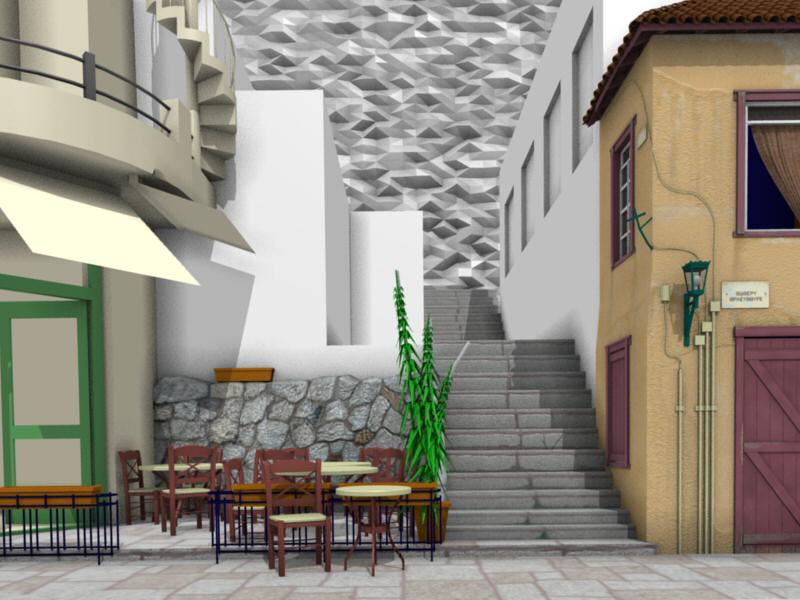 I suck at modelling plants though, It’s going to be difficult filling this with the range of foliage it needs.

Use model repositories for your plants. Yoric, Scopiaand ArchiDOMhave an assortment, although you’ll have to import ArchiDOM’s, since they are in 3ds format. Put them in your scene as billboard planes (Yoric explains), to avoid the huge vert load modeled plants add to a scene.

Hey, that looks very good. I especially like the rock wall and the steps’ textures. Very good.

That wall in the very far back, is it supposed to look like that?

Thanks Orinoco I will have a look at those sites. My intention with this project is to learn some new techniques, so I will probably have a go at modelling most of the plants. I am also looking at Gen 3.

Hey, that looks very good. I especially like the rock wall and the steps’ textures. Very good.

That wall in the very far back, is it supposed to look like that?

Guitare87: The steps texture is drawn, good practice with my graphics pad. The rocks were modified from a photo texture.

The rocks at the back are just temporary to allow me to get an idea of the camera perspective. Check post 2 for the initial blocked out scene.

Thanks Orinoco I will have a look at those sites. My intention with this project is to learn some new techniques, so I will probably have a go at modelling most of the plants. I am also looking at Gen 3.

I quite understand. Even so, plants generally take a huge toll on memory, since even a simple plant has many vertices. So, the main technique for still shots is getting billboards and shadow boards set up so the plants, whoever modeled them, don’t crash your system. The best plants seem to be procedural plants (made by generator) instead of hand modeled.

I’m slowly getting to grips with Gen 3, which I have used for the larger trees. The front Yucca type tree was modelled by hand and the grass in the pots are strand particles. It needs a lot more work yet but it’s slowly taking shape.

Now I have got to work out the best way to model Mediteranian palms? 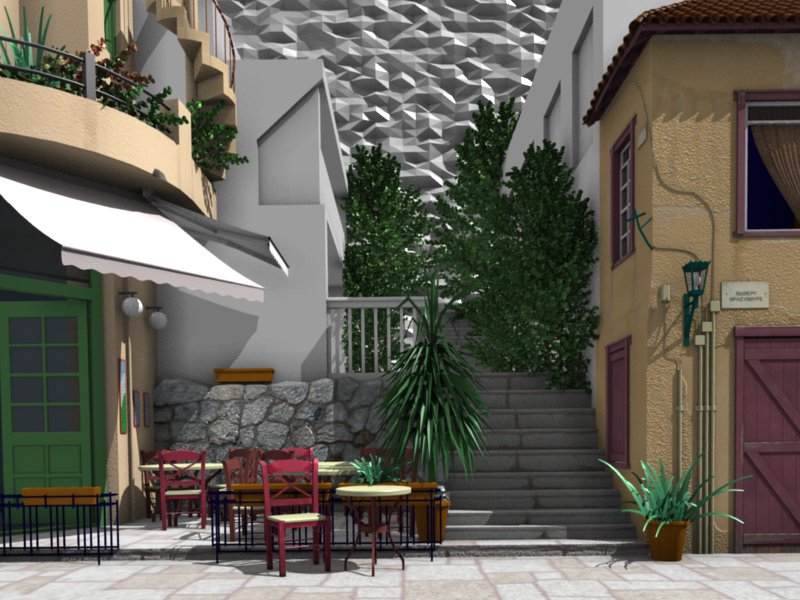 Except for that back wall and the other unfinished spots, you’ve got a pretty realisitic render there. Keep it up!

Hello. It’s good to see you making so much progress!

Could you please write a few words on how you textured the building on the right? Of particular interest to me is how you created the bump-maps for the building (with some parts being bumped and others being smooth), and how you created such things like the dirt marks underneath the windows. They create a very realistic feel to the image.

Great work! Can’t wait for the finished piece. Would you consider making a tutorial for creating the textures and uv mapping them to the scene. You seem to be quite adapt at it.

Jimmey: musk,: if there is enough interest I will put a piece about mapping and texturing on my web site. The site needs something new, as the Engineers Guide doesn’t seem to be generating much interest.

By way of an update a few more details and plants have been added. The background is going to be changed for some proper cliffs eventually. Serious C& C would be appreciated. 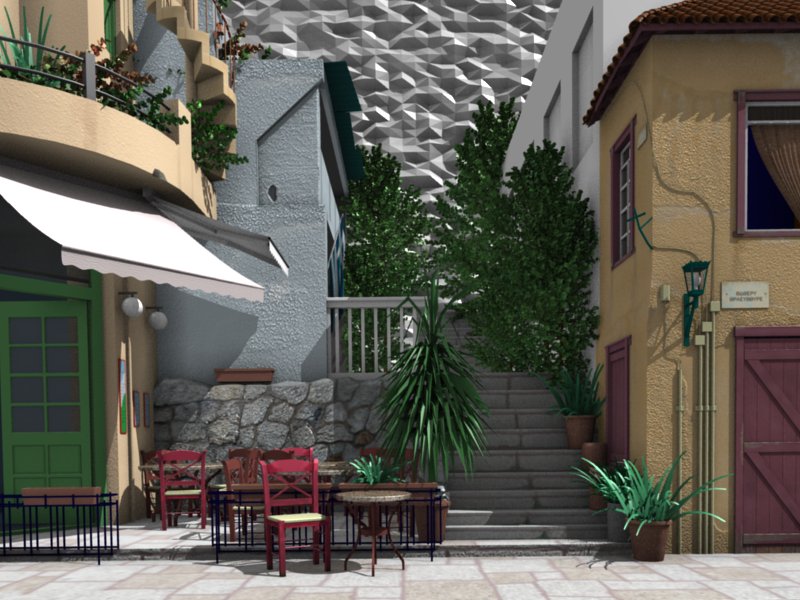 I’d appreciate the effort:)
Looking great so far. On the yellow house their is some sort of green artefact coming from the shadow right when it crosses the corner. Also the hole in the grey building to the left of the stairs looks weird but I can’t really say what to do about it.

Thanks musk, well spotted. It was some vegetation coming through the wall.

I think I am about there, all but the cliff face to do, I am not sure the best way to start on that. 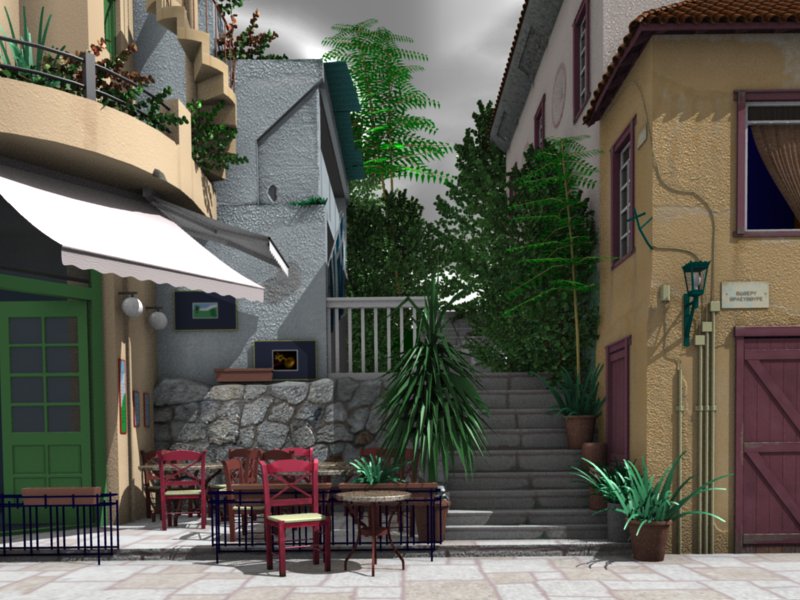 I have been watching this thread since inception and there has been some tremendous progress. This project just keeps looking better and better every time I look at it.

One other thing I notice is that not only does the road look flat but the rock wall looks too smooth in comparison to what I have seen in real rock walls.

Keep up the great work.