I couldn’t find a good planet tutorial for blender, so I decided to try it on my own.

All I did was this:

Please tell we what you think and what can be improved (besides adding stars. which I’m going to be doing) 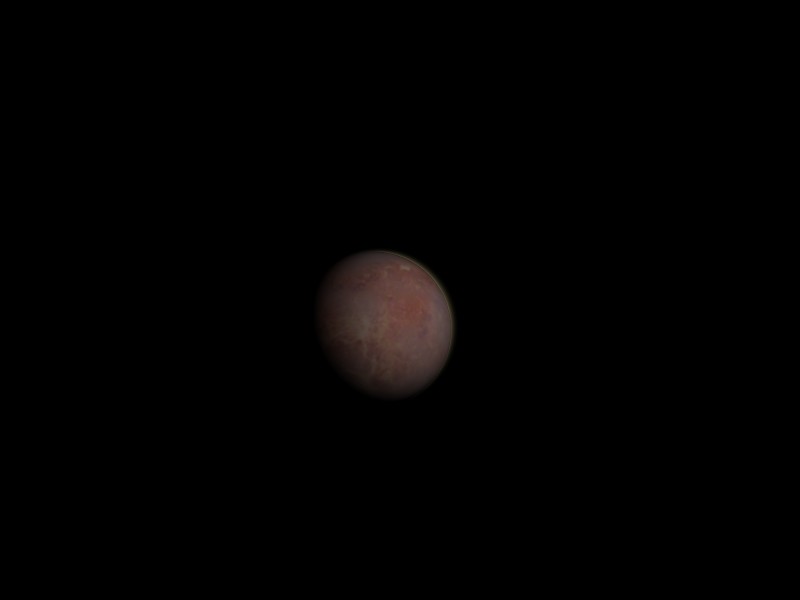 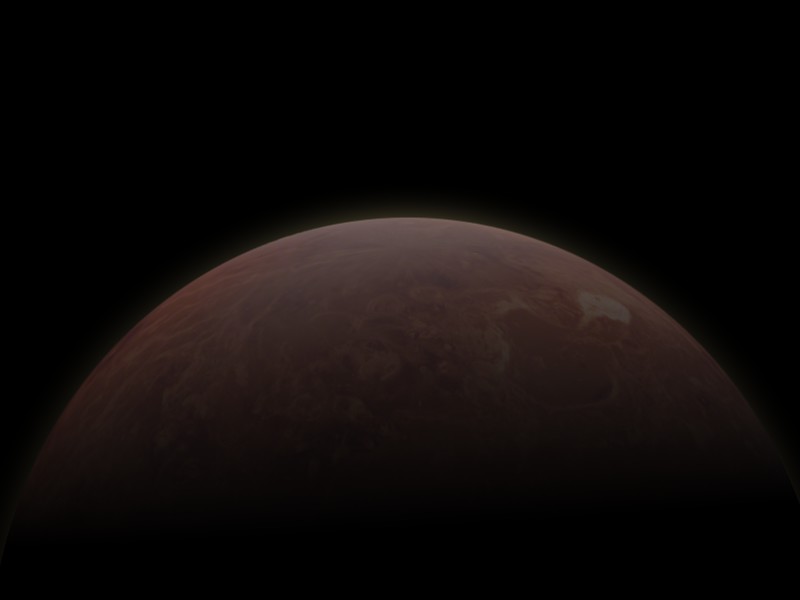 venus is yellow and cloudy thou

Venus is the second planet from the Sun, orbiting it every 224.7 Earth days. It has the longest rotation period (243 days) of any planet in the Solar System and rotates in the opposite direction to most other planets (meaning the Sun would rise in the west and set in the east). It does not have any natural satellites. It is named after the Roman goddess of love and beauty. It is the second-brightest natural object in the night sky after the Moon, reaching an apparent magnitude of −4.6 – b Venus i...

and animated texture would be cool

No critiques? cmon, I know there is something I can improve… 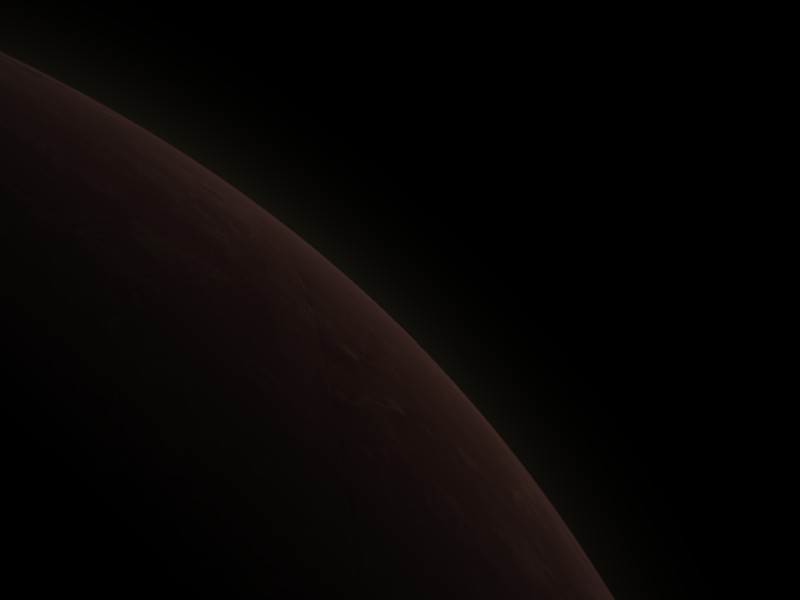 Well…it’s a sphere…
with a texture…

but aren’t there things that make it more planetlike?

First off, I think you have done some good work on your planet, but I think it could still use some tweaking. One thing it’s a little to dark, I know space is dark but it covers up some of the nice details of the planet. Maybe, you could try and use the node editor to get a nice glow effect on the planet (see the images below). Also, try and work on the clouds some, to give the image that extra touch;). Maybe, add a sun and a nice background, like a nebula or something. Hope this helps. 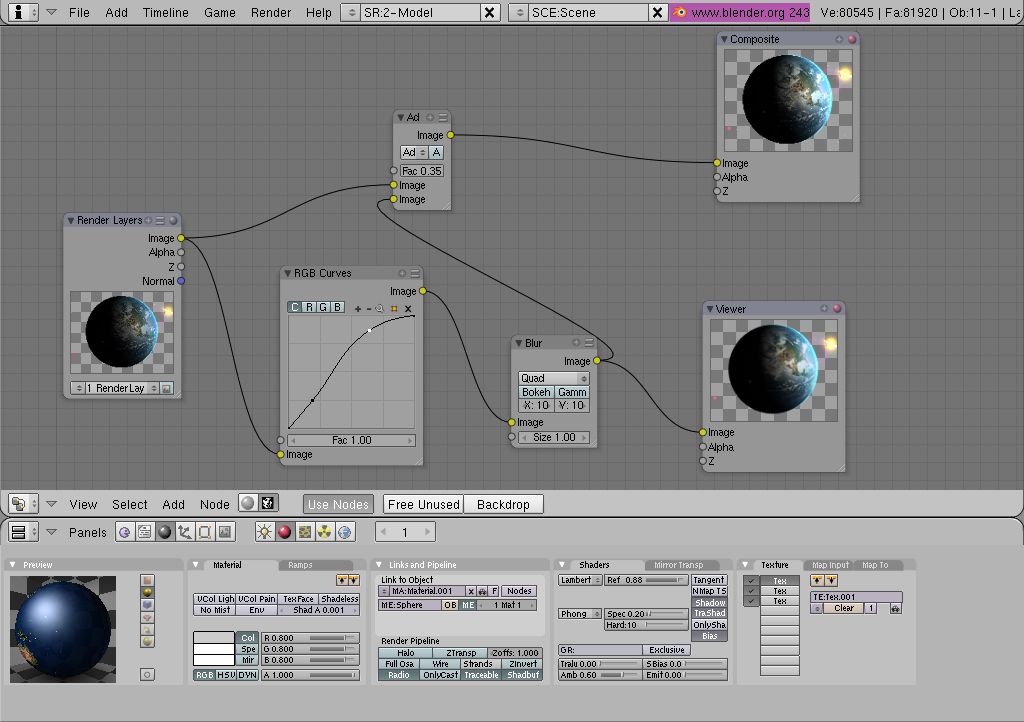 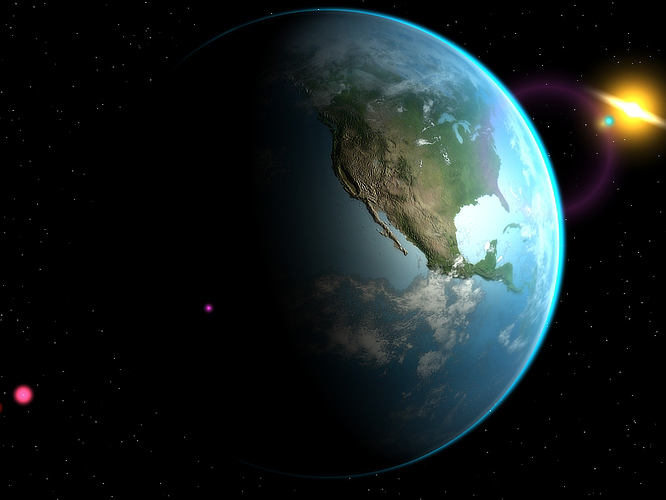 Acer: How do you do the clouds for your planet? I haven’t yet found a way to do the clouds besides using the basic (and annoying) cloud texture in the textures menu. (is there a way to make a clear plane with white clouds?

Oh my gosh Acer that is brilliant…

clouds are difficult. you could use an earth cloud map, like the one here:
http://planetpixelemporium.com/earth.html
… or use it as referance to make your own…

as to the lighting, make a blue hemi opposite your main light source and set the power really low (like 0.05-0.1) to add some starlight. The atmosphere diffuses light from the sun around to the back, and stars/moon/reflection from planets = more light for back side… glow also helps.

atmosphere: note this image:
http://www.geog.ucsb.edu/~jeff/wallpaper2/blue_marble_globe_west_wall.jpg
the atmosphere shows up as a slight blur, this might be able to be achieved with nodes. (blur image, add original on top)

Nice start! Here is some info to help:

I did a tutorial for the whole planet but for some reason I never got the post to work, the tut here is just as good if not better.

here’s what I was talking about with nodes… it’s a little subtler than kevin’s way:

Cool node setups, and I like the New Avatar too Jesse

Oh, and sorry, I’m a major noob and don’t know how to use the node editor…are there tut’s?

alpha channels.
depending on the type of image you’re using for a cloud texture, either click ‘use alpha’ on the texture settings thing or …the other way which i have forgotten atm

here’s a newer rendering with a bigger glow and new atmosphere sphere. 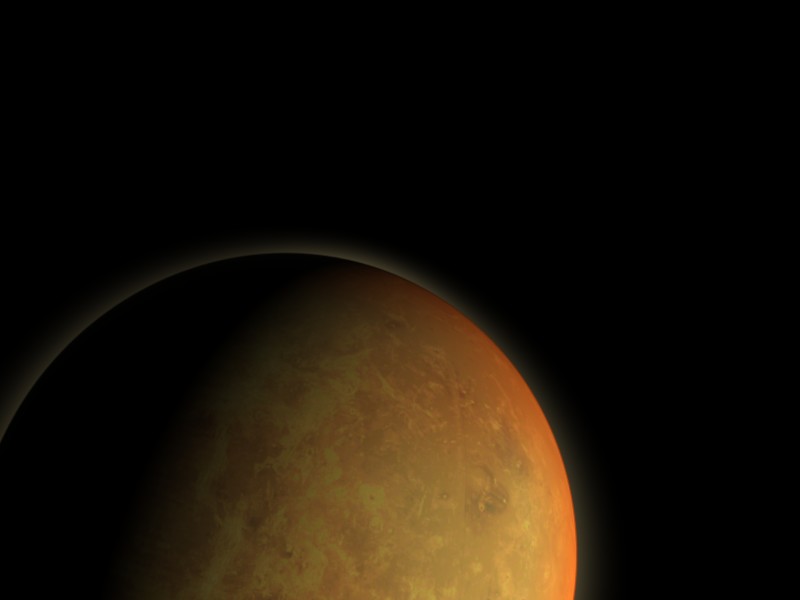 thanks for the cloud instructions. I figured it out (which will be usefull for tons of other stuff…). Here is the newest render. 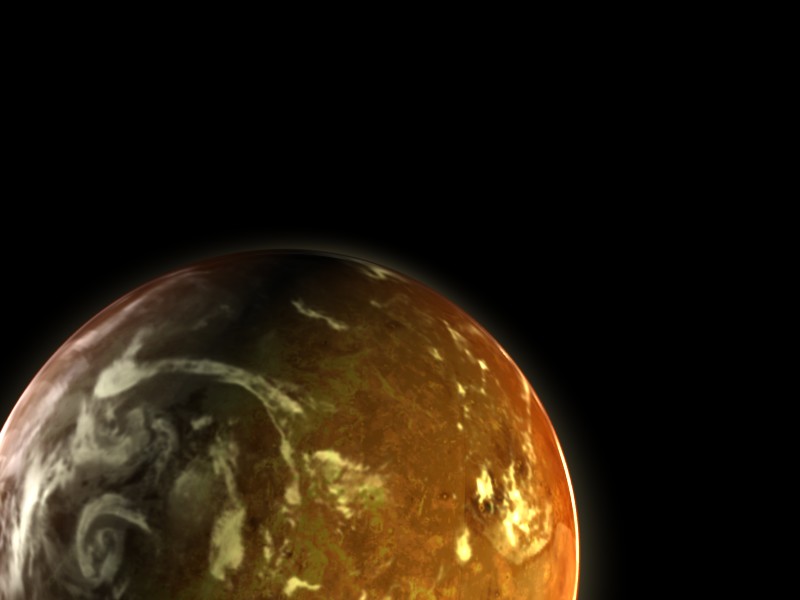 Well, it really looks much better with the clouds and the lighting Clever Oaf. You have some really good resources and I think you will do just fine on your project. I was going to post some stuff to help you with the clouds, but it looks like your set now. Also thanks for the complement free_ality glad you liked the post.