First I’ve posted in a while. Went for a cartoony Acme look. Did I get it? lol. Tell me what you think. 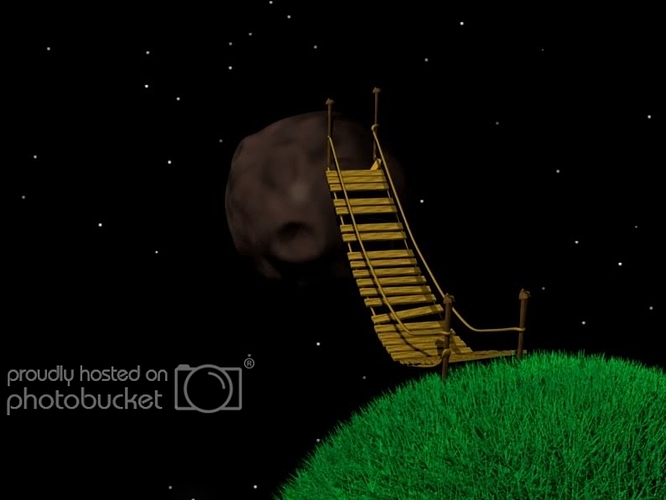 Couldnt decide which I liked better.

Personally, I prefer the first one.

Though I also feel it’s a little too empty.

How about a solar flare or some more plants in the background? Perhaps a broken down spaceship? I like the bridge, you did very well on it.

I think they both need little houses and the angle of the shot should be changed so that the rocky planet is more up and to the left.

Reminds me of those old books The Little Prince (?) he was always standing on this little planet

Ha thanks guys! heres an update. Should i be doing updates in finished projects? Oh well. its justa camera change and post editing. Fight the power, right?

heh, this is a really fun image, I think the very first one works the best for me in terms of the “Acme” look…the very last one while improved in terms of render quality is also pushing over into a more realistic mode that losses a bit of the cartoon feel for me personally.

My only CC is that I like the transition between worlds a lot but I kept thinking also about the temperature difference, I think it would be interesting to have frost on the bridge or on the grass near the bridge.

Not to make work for you tho! I like this image, its funny.