Hi, to get more into the blender animation system, i made a short film about a gig on stage: 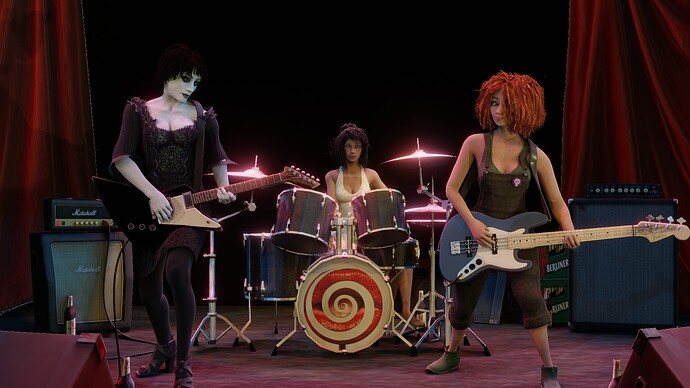 Credits are on youtube: guitar, amps and drumkit are from sketchfab 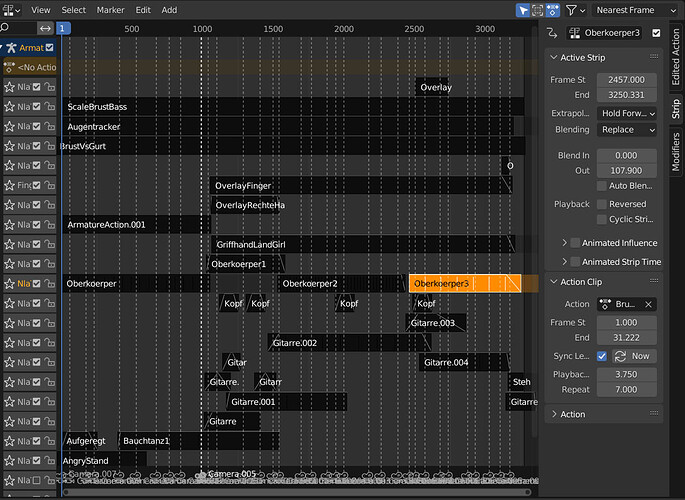 …well, that’s my mind blown. I’ve got so many questions, like how’d you time the guitar strumming with the music so perfectly, and how’d you get the hand animations to be so believable…?

I tried doing something similar last week with just one character, and it was a MESS

The basic movement of the guitarrist (and the base player) is a motion capture file from mixamo. speed is adjusted in the NLA.
The guitars are parented to the hip-bone of the rigify-rig, and the ik controller of the left arms have a ‘child of constrain’ to the guitar. then both hands/arms, left is IK and right is FK, are animated per hand (it took aprox 6hours to animate them, and still it could be better…)
For corrections i dont edit the basic animation, but override the actions with a new action in the nla. In some tracks i deleted all transforms of a key in an ‘override’ action but one, so that the transform keys of the underlying action/Track still influence the animation. i.e. one action only influence a x-rotation of a bone and the underlying action has still the movement for the y and z rotations.
the head, the torso and the feet of the drummer have only one key and a modifier- (build-in-function: sine) set up tn the graph editor. the ik-hands are animated per hand.
the animation took about 10 full days (no modeling but incl lighting)
(in the image: one ‘strophe’ = action of the right hand and the audio waveform)

I hand-animated all of the stuff in my Siva project, but also slowed and sped up animations in the NLA. Also did a couple of tweaks to the torso/head headbanging loop by using extra strips in the NLA instead of changing the base animation. And I did parent the guitar to the hip bone as well, but I rigged the guitar itself with 2 bones-- one Root for more control over the rotation and location, and one bone that travels up and down the fretboard. I parented the character’s left hand to the fretboard bone, for easy animation of the hand sliding between frets (this didn’t get utilized at all in the Siva animation XD)

Overall though, you definitely put more work into this project and it shows. You say you spent around 10 days working on this, and I must’ve spent…I dunno, 12 hours? Maybe 15 total?

P.S. Thanks for the extra screenshot of your NLA editor. I thought my NLA setup for the Siva animation was already a complex, but yours looks WAY more detailed.