and another question is there any way to use endObject code with wildcard characters as “* or %” to destroy multiple objects includes same characters. for example i wanna destroy too many objects names ended with “_rgd” like “obj1_rgd”, “obj2_rgd”, “obj3_rgd” and etc. and wanna use scene.objects["*_rgd"].endObject.

this will delete anything with the property tag

any idea for other question?

How to: create Action sequences with logic bricks - the power of the ActuatorSensor

You can find more in my signature.

btw. if you rename “objects” to “object” it makes more sense ;).

thanks Monster. i’ve learnt a lot of things from your tutorails.

i have one more question. i askeing this question to understand logic of blender ge. why blender runs some codes multiple times. for example i added an always actuator to camera and add a module to it. the module has a for loop and a print code to show result on command line. but when i run the game sometimes it prints two times, sometimes three times and sometimes four times but never once. 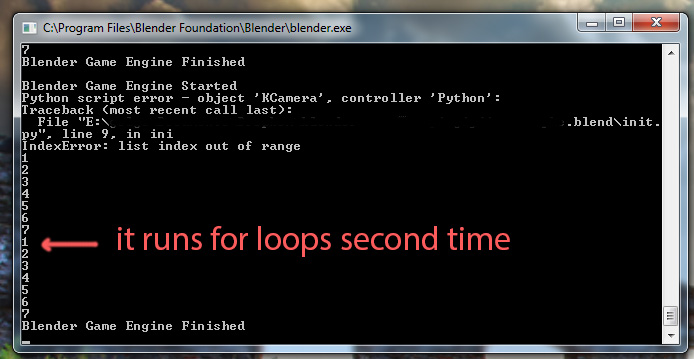 thats why I use objects in this case

(python uses object for something)

I do not really understand what sensor your are using. But it sounds like

Double execution of a python controller

thats why I use objects in this case

(python uses object for something)

In the past I recommended not to mangle “object” as this makes the class “object” not available. Therefore I suggest to use the name “gameObject”. This is more specific towards the content of the variable. Nearly everything in Python is an object, but not everything is a gameObject.

The plural form “objects” suggests the variable is a container. I expect there is none, one or more objects present and I need to differentiate between processing the container and it’s content e.g. copying, iterating.

When you explicitly know there is exactly one item, it is better to use singular form of the name. This is not always possible with English language (e.g. data, news). In that case alternative names could help.

Naming things can be really hard. E.g we often call variable with a game object “owner”. Why? because it is meant to contain the game object that “owns” the currently executed controller. The term “owners” makes not much sense in that context as we know there is only one owner.

So how do we call a game object? “owner” or “object” or “target” or “hitObject” or “player” or “o”? It depends on the situation and what you as developer want to tell the reader (and yourself). (Btw. the compiler does not care how you name your variables ;))