Please, how to get it to more photo realistic skin!

Hi, people. After mutiple critiques and questions, I have somewhat managed to make a skin shader, but to me, the skin still doesn’t look all that convincing, I know the basis and in/out of how skin works, but I don’t know how to inprove upon this point. If you guys can see my renders and tell me what you thibk of it, as well as how to make it better, I’ll appreciate it. 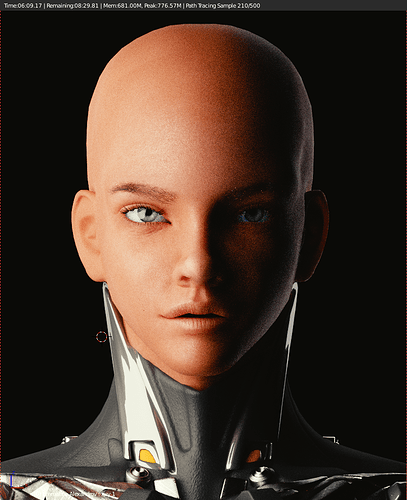 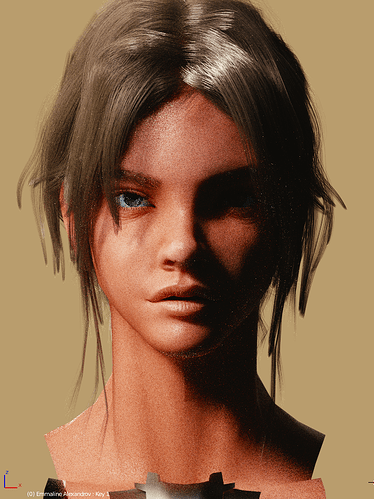 By the way, bottom one is slightly improved head model, but uses same shader

I am by no means a Blender skin shader expert, but from experience, imperfection is the key to a realistic rendering.

Bump/displacement aids in the breaking up of perfectly smooth areas, and varying the “glossiness” of the face aids in the portrayal of natural oils in the skin which are more prevalent in the forehead and nose areas, as well as more moist areas such as lips. I have yet to master the node editor to tell you how to mix SSS shader and a glossy shader, but looking at online tutorials (youtube) and example shaders such as the ones on Blender Market or Blender Swap would be a good place to get some ideas.

I’ve had luck with some very simple shaders such as this: 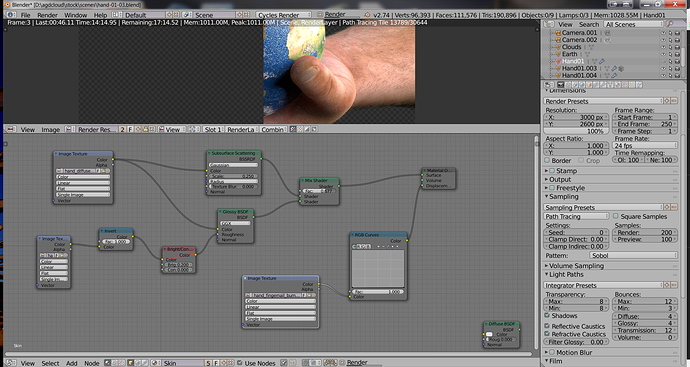 Lighting also plays an important role, but it looks like you have a very good rig to tweak the material with. I’ve had skin looking almost perfect with one lighting scenario but total garbage in another scene with different lighting.

Seems too orange IMO
Doesn’t really look that bad overall, But more could be said with a higher quality render.

Thanks for reply! I use my own custom shader that uses three layers of SSS. One represents epidemal, second is subdermal layer. And lastly, it is backscatter.

The first layer of SSS acts as sort of dead skin, thus have a color of white, slightly tinted with purple or orange. And it is most subtle one, and has very subtle radius. Value of less than 0.001. However, it is the one most distributed across the entire skin. Second one, subdermal, is sort of like fatty layer, but also contributes to main color of the skin. Originally, the tanned skin(what’s shown above) was controlled by the factor of dark emission shader, that acts as darkening the entire skin. However, I excluded that node on this one to see if I can do it purely with the original textures. The last one, the backscatter, is what we see red glowing or red coloring on ears when the light comes through the ear from the back. This also plays very important role, although this can be seen on ear or thin skin layer, this can be seen all over the skin.

All included, the percentage of overall weight of each SSS shader will be, 0.1~0.3, 0.6~0.8, and 0.82~1. This will have mostly on subdermal, and backscatter can be seen easily at the border of shadow and the main skin color, forming a line. This happes to actual skin as well.

And as for, the glossiness, I’ve used my custom fersnal node based on PBR shading, that allows me to control the energy conversation. And the IOR curve value of the skin is still adjusting and still being experimented on because there aren’t any documentation about it on the web.

My shader also uses four different colored textures contributing to each shader, and one good old diffuse shader to gain more control over the entire SSS value, and these mix factors are also being controlled by math nodes, and a black and white version of regular texture. As for macrobumps for skin, I use two different Normalmaps, and ofcourse, for same reason. However, I don’t use bumpmaps because they usually makes the render data bigger, which downgrades the speed of the rendertime.

I also have some optimization nodes, such as Camera rays, making the macrobumps invisible to all other materials but only to that shader and to the camera, making the speed quite faster. However, after all these setups, I am still not pleased with the results. Maybe like like Bossestrenders said, it’s too orange. This will probably make me turn bsck to old method of using the black emission nodes to control the tanness of the skin.

Ya, attachments are broken. I think it has something to do with quick replies.