OK here is a robot I made for a game (Project Granite). What I want to happen is the top of the body and camera to move whenever I push right and left arrow keys and I want the legs to stay in one place. I also want the legs to move in the direction the head is pointing. So like if the robot is looking behind him and I push forward, the legs turn around instead of the whole body going in circles.

I have already done a lot of that above, but I am having a problem. If I parent empty1 to the head bone to move him (the head bone has a track to constraint pointing at the empty3, don’t ask why it is behind him) then whenever I push a left or right arrow key the head starts spinning in circles as if it had a motion actuator on it with force settings applied, but the legs do go where I want them to. If I parent empty1 to the main body(the blue box) or any other bone, then the legs don’t do what I want and they just go in the direction they are pointing and rotating in the direction the head is pointing, just not at all how I want. How do I fix this? I tried to make this not so confusing.

These are the settings applied that make my head spin round and round when I push right and left arrow keys. But my legs are working exactly how I want them to. 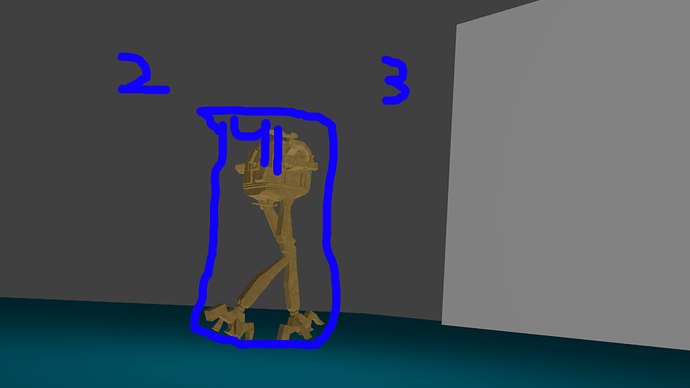 I do know why it keeps spinning. It is because whenever I push right/left arrow keys, the empty3 and bone and empty1 sorta form a triangle of force so it just keeps pushing the empty/bone in circles more and more. I STILL NEED HELP!!!

Anyone care to answer?

I’m sure someone’s going to say that you should post a blend file, so you might want to consider it. Also, perhaps you should try isolating the problem - take some of the things out (if the legs are working fine, get rid of them, move on to the next piece, etc.), until you find the object(s) that are causing your problems. From the sound of it, shouldn’t the head bone be parented to Empty 1, not the other way around? Also, maybe you should name the empties, since it’s difficult to understand how they interact with the armature.

OK here is the blend. Do me a favor and don’t steal anything. And please don’t change anything except what needs to be changed (As in logic/adding or deleting empties.)

Do me a favor and don’t steal anything.

Just so you know, it’s really bad manners to ask someone not to steal something (especially someone who is trying to help you). Would you do that in person if someone you just met walked into your home? It implies mistrust. Besides, there are VERY talented people here posting things all the time.

I feel like you are just telling me that my model stinks so nobody would even want it, I really just said no stealing as a joke.

Now let’s get back on topic, I don’t think that there are any textures in the blend I posted, so don’t worry about that. I just need someone to work with it and sort out the logic necessary for me. Right now the head is spinning too much but the legs ARE doing what I want them to. Oh yeah, one more thing. No python. I don’t want to use python until I learn how to use most of it, which I am working on.

This site may help you: www.thiswigs.com

Wow, your file seemed unnecessarily complexed and out of order. I guess you know now that it would have been better to get the controls down before adding other stuff. It was like swimming through a dumpster trying to find the problem, and that’s probably why no one has responded.

“headfollowctrl” is now vertex parented to “robotphysics,” and the “robotrig head” bone has a copy rotation constraint to “headfollowctrl.”
I’m happy to see the object constraints working between objects and bones now!

edit: I hope that helps. I deleted and re-added some things to make it work. Good luck, and that’s a cool model you made.

I’m glad it helped. I haven’t used blender in over a year, so thanks for getting me going again! lol
I’ll help you with your game if you want. I need to get my feet wet in 2.5