Alright, considering my most recent obsession with pokemon, i’ve decided to start my own fan based animation series that revolves around it. now, I am currently working on a pokeball but have seemed to run across some mesh issues. Im not quite sure how to fix this so some help is greatly appreciated. If you can see, there are what appears to look like dents in the top/bottom around the button and i just need some pointers on how to smooth that out easily

hmm…that might be the faces having some sort or Normals problem (Ctrl-N to fix that)…
…or then again, it might be triangles, or Subsurf + Creased faces.

could you post another picture from a different angle? or maybe a screenshot of the mesh? might help determine what the problem is

other than the strange faces, looks good! I’ve made a Pokeball or two, but I always have trouble with the center stripe, I always make it too thick :o haha

here is the blender file

the problem is that your mesh is really messy

try using the solidify modifier, followed by an edgesplit modifier

if you want to stick with 2.49, i’d suggest extruding and scaling with the 3d cursor as your pivot (be sure not to change the 3d cursor location after adding the new sphere)

the only thing im not too fond of is the button, i might redo it and see how it turns out.

I haven’t checked your blend file yet (waiting for the download to start), but the new version looks really good

edit - btw, if you want to attach blend files to your post, go into the Advanced post editor, and upload it in the Attachments box (the paper-clip icon)

re-edit - I’ve just checked your *.blend, and Jeepster was right, the problem was a messy mesh - you seem to have fixed that in the newer version: from the picture it looks like your mesh is smooth and clean

…I have no idea what’s supposed to be in a pokeball though… probably advanced electronics, haha

@weaver-haha…was more on the concept of being able to see your pokemon inside them…having issues with getting that to work out right…another thing, any suggestions on light setup…im not so good at that myself and havent really found anything useful to help me set it up

well, that would depend on the effect you’re going for, but a good, general set-up is something along these lines:

I recently learned to set-up a good three-point lighting and it’s really much better than my previous (crappy) set-ups :o
anyway, in this set-up I used a Track-To Constraint to keep the lights pointing at the object, and I have the Key-Light behind the cam, the back-light opposite that and under the grid (of course, that doesn’t exactly work if there’s a type of floor in the scene), and the Fill light has it’s Specular deactivated and is off to the side. It’s really just to even out the light. I’ll do some test renders to compare this set-up and the default one, I’ll come and post them in a minute

EDIT - I have the image

now, the 3-point is slightly messed-up, I think I overdid the fill light… in this case it’s probably not ideal. but these set-ups need a lot of tweaking, depending on the scene, so…yeah.

anyway, hope that helps, and May the Blend be with you

In order to create sharp edges and still use the smoothing of subsurf (looks like you used subsurf in your last model) you can select the edges you want to have sharp (in this case the edges of the outer to shells, so to speak, you might want to have a sharp edge) press ctrl + E and select set sharp. Now go to the modifier panel and add a edgesplit modifier, uncheck the edge angle thingie and select marked sharp (or something along those lines). Your sharpmarked edges should now have this nice sharp edges

Just out of fun I tried to make a pokeball aswell, it’s not perfect (far from it actually, but for the time spent on it I’m happy with it). I’ve attached a render and the blend, you can take a look at my topology (again, this is probably not perfect, but you might want to see how I did it

) in the blend is also a simple light setup you might want to use. I did use 2.54 for this, so if you want to open it I recommend getting 2.54, (judiging from the blue background in your renders I think you’re still using 2.49). 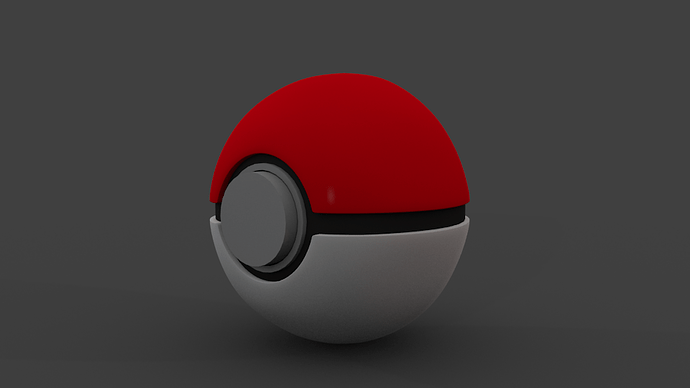 @month-how the heck did you get it to be so…clean i guess around the button…im just merely starting to really learn this program so i’m not very good at making objects. i am learning from the essential blender book i picked up from barnes and noble about a year ago

@mesh-thanks man, that helped out alot…heres an updated picture of my pokeball

Don’t worry, everybody has to start somewhere. You should see my first models, they were horrible! xD
Best way to learn imho is to make things yourself, just do tutorials, but don’t try to copy them exactly, but give 'm your own twist

Your pokeball is a good start imho. I would if I were you try that edgesplitting modifier I described above.
One thing I’ve learned and which keeps frustrations away: Try to keep your model as lowpoly as can, smoothing can best be done with subsurf (in my experience) and it is easier to add additional detail (iow add additional vertices en faces) then to remove excessive geometry.

I’ll try to make a quick tutorial how I did it (it’s easier to explain visually then in words).

Anyway, keep it up looking forward to updates

Edit: to get that shadow effect below an object (an infinite plane so to say) add a plane to your scene, give it a material and go to the material options, there should be a checkbox with something along the lines of shadow only.

that sounds epic…i just downloaded 2.5 so im gonna see how this one is different from 2.4 lol

edit: well have to say that 2.5 is rather confusing >< the shortcuts are a little different and i dont know where anything is ><