Hey y’all, here is a new little project of mine, a Polar Bear Cub

Why? Dunno, I guess its just because its so cute and I want to do a furry character i guess 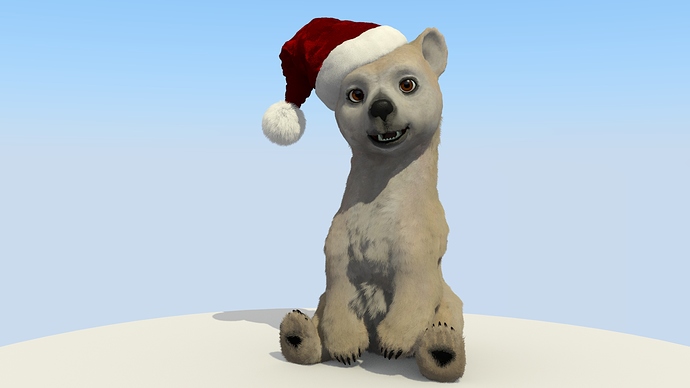 Anyhow, here is a 10 minute sketch session to get me acquainted with the shapes and proportions of the bear cub:

Here is a 1 hour quick sculpt of the cub: Looks really nice. My current favourite movie is Hanna and there’s this really cute little polar bear cub shown in the first few minutes (only briefly) so I can relate to this.

I’m actually really excited to see how this will turn out textured and with fur! Keep up the good work

I am going back home for a few days, so this is the little personal project I will work on while being there. I am leaving in about an hr and should be back home later on this afternoon. I’ll post some more updates later on

i know how great you are with fur, so this will look awesome!

I am going back home for a few days, so this is the little personal project I will work on while being there. I am leaving in about an hr and should be back home later on this afternoon. I’ll post some more updates later on

Yes she was, wasn’t she. Oh, you mean the polar bear…

Btw, the polar bears don’t purposely hunt humans, however, since the humans are the cause of their principal food supplies going down (Seals), when they are hungry, why not attack those who take away your food supply

If you see a skinny polar bear, run, if he is fat and well rounded, don’t worry too much

I had the pleasure of seeing some of those from a rather short distance when I went up north Canada in Yellow Knife. They aren’t too present in that area but they are non the less

Very impressive to see live! Wouldn’t want to be too close though, its a huge beast

crazychristina: I haven’t seen Hanna yet, well, I don’t think so anyways, but thanks for the tip, me and my girlfriend sorta ran out of movies to watch since we’ve seen so many, so this will be nice to watch

Well, I am now back home and I will get some work done on this, will post a little later on when I got more done

Here is a little update on the retopo, pretty much done, there is a few areas to fix and detail up, then I’ll tackle the inner mouth and eye model 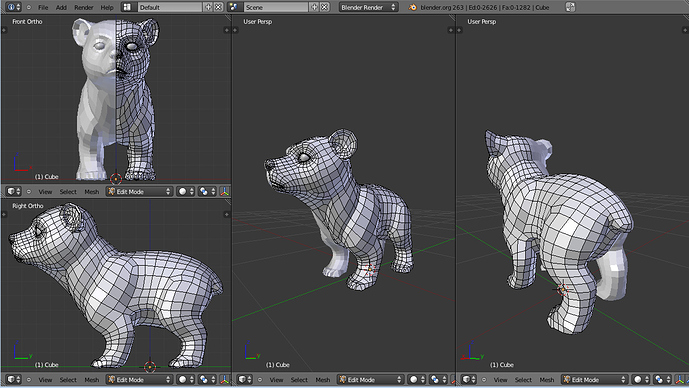 Well, I just finished the model

Its all quads, I have the inner mouth, teeth, tongue, body, eyes and nails

Now I can do the UVs and start texturing, rigging, adding fur, etc… (Not trying to make a hyper realistic one, but rather a stylized one

Again, any C&C is welcome
Cheers!

Love it. Do you have plans to use the model once it’s done?

soohicat: lol, thanks, thats the plan

I may make a short animation with this little cub in a snowy or icy scene or in water on icebergs, but I actually recorded and continue recording everything and I will turn the recordings into a tutorial for my website once I am done

Looks nice, though it has somewhat of a bored expression. Also I think the shoulder might be set too far forward, but maybe not. I’d like to see where this goes!

Model looks good, I just think his head has more of a dog appearance. Maybe round out his cheek/head a bit more.

very nice @JeannotLandry . I like the posture of the rear legs, few manage to render it correctly.

Well, you have to keep in mind there will be some fur on him. Also, the head has the appropriate proportion for a cub, the polar bear adult has a more elongated nose as opposed to the cub

I must say, using reference is always the way to go. I find not enough ppls seems to use them and try to go from their head. I have been doing 3D for 12 years now, and I always use a LOT of references, so I guess it does come in handy.

Jean - it’s interesting the difference fur makes I guess, because looking at this pic it appears the cub’s head and cheeks are actually round.

DarkLimit: Aahh, yes, I do have that reference pic, but am not using it since this is a very very young cub, too young. I am aiming for something a little older, perhaps a cub that is more teen like. I am going more for something closer to the movie Brother Bear like this but polar bear

that cub looking good. … Am wondering is there enough polygons for skinning and facial expressions…

Waiting for the furry one…