«No wars would never start, every man would have a friend, that right would always win, and love would never end…»«At Christmas, it’s time to give to others…»

These sentences were the inspiration for this project.

It was entirely done in blender from sculpt to compositing. I really hope you like it 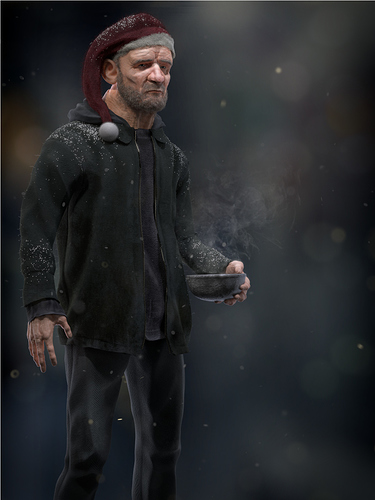 Just to say that the image is also on blender cookie: https://cgcookie.com/blender/images/poor-christmas/
Here’s another render (wire): 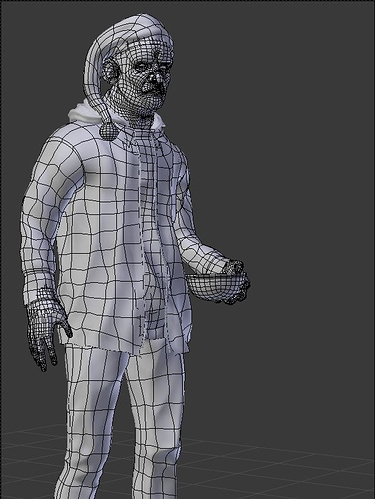 I like it a lot. The Bokeh background is perfect, it reflects the feeling of confusion and uncertainty shown by the character’s expression.
Great song for inspiration by the way, it is one of my favourites.
My only critic would be that the right hand is a little stiff, maybe try to set it up in a more relaxed pose.

Wow, you really did a fantastic job! You gave the render real character and atmosphere, and that’s not an easy job to do. You know you could fine tune the render a bit, for example zooming the camera a little closer to the face for giving the image a “tighter” look, and also making the fabric more realistic looking. But that doesn’t matter because this is a really moving and heartfelt render, and I think that is one of the biggest compliments I could give an artist.

Wow! Thank you a lot to everybody! I really appreciate the comments!

Great work, I hope it gets to top row!

Tank you again!!
Bonrw1: I also hope to be in the top row

Very nice final output. Skin is definitely better on this one.

Absolutely Amazing Render, only critique is that like its been said before is the right hand is a little stiff looking curl the fingers a bit almost like he has a loose gun grip, as we age and use our hands they typically form a loose gun grip(usually I’ve seen some people with some straight up flat hands) other than that nothing you managed to give the guy personality and that is tough to pull off, Pixar grade render 10/10! grats on the super fast top bar too ;p

Actually didn’t notice till now but the neck is a little bit fat and the area where the under shirt meets the neck has a really sharp edge on it, Still a Fantastic render, Could use a bit more detail on the ears and just noticed they are a bit too round, but you’ve got face modelling down to a science. Still 10/10 in my book

Nice render there. Though the story behind it is so wrong

Tank you again and again!!!
Ziekan: You are right sir!! But since I worked a lot on this project and I’m a little bit tired of it, I will not change it. I’m going to remember and try to do this in my future projects

Grats on making it to the TopRow