I’m french, so sorry for my bad english. 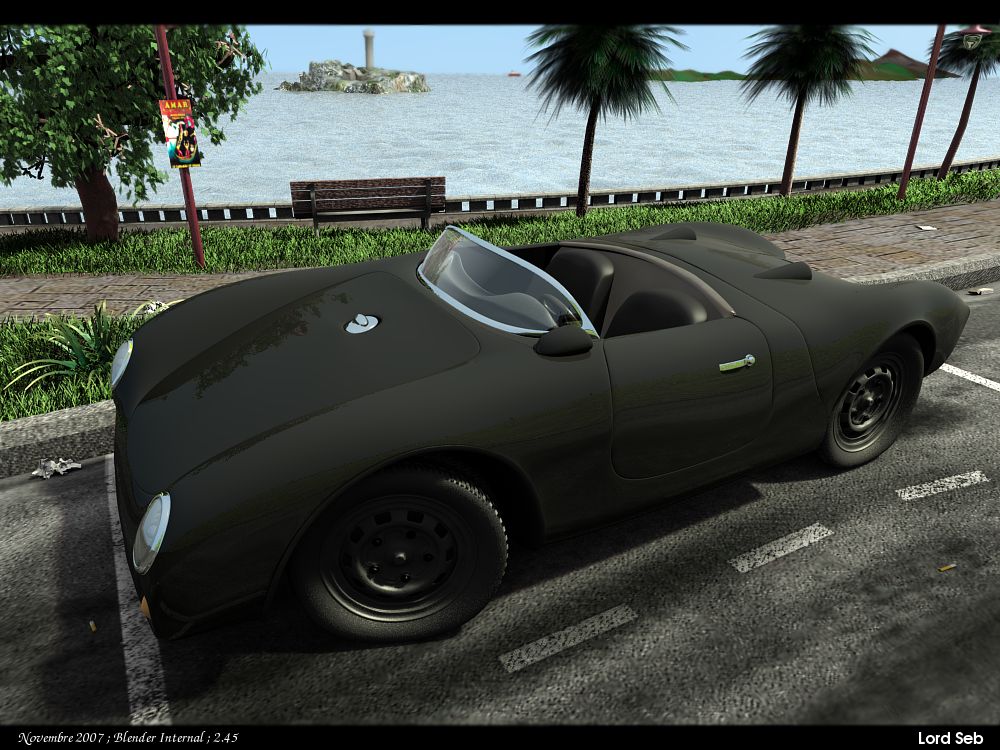 Perhaps, I will calculate this picture with a realistic rendering engine (Yafray for instance).

How did you render this, is it all blender?

How did you render this, is it all blender?

And textures with Gimp .

It’s my first project, so there are lots of errors.

I taked lots of times.

Extreemly well done on that.

English : “Dude that effing rocks, although due to the render being dark (and the car black) there are some details that are hard to make out. But its once of the best pieces I’ve seen.”
French: “Yo, cest vraiment beau, mais l’image est un peu foncé (et la voiture est noire) donc ya des détails quon voit mal, mais c’est vraiment une belle réussite. Bravo!”
Thats the closest translation I could make

Extreemly well done on that.

Borgleader, thanks for translation.
Also,
although due to the render being dark == > Yes, I want.
there are some details that are hard to make out == >I could increase the “Ref” of rims. Maybe, this could darkless picture.
But its once of the best pieces I’ve seen. == > Ok

Well done !
Maybe add some depth of field effect so that the background appears slighlty blured. I think it would make the viewer concentrate more on the car itself.

Overall this is very good. The rims and tyres look fantastic. In fact, they are some of the best I’ve seen around…

The following comment is not a crit but rather an insight into how I experienced the image you produced.

When I first looked at the picture the color of the car distracted me. The reason is that my brain functions by association, and it associates the color you have chosen with a military vehicle. This forced me to stop and think about what I was viewing. For a brief instant my brain was telling me that this scene might have been shot during WW2 and I even imagined that General Patton might have commandeered this car from the Germans. But after a few seconds I realized that this was entirely impossible because the Porsche 550 was designed in the 50s… and there were no tanks or General Patton in the picture… If the car had been a different color my viewing process would have been more fluid… and the experience would have been entirely different. By different, I don’t mean better, but simply different.

Overall I’ve enjoyed viewing this… perhaps because the color of the car actually forced me to use my imagination a bit.

I’ll comment on the lighting and textures since the modeling looks good enough.

The main lamp on the scene (the sun) should have an orange color and be more powerful since the sun is already up on the sky. The ambient occlusion also should be stronger (and blueish, but I guess it is already blue).

The textures on the road, the sidewalk and the bench should have higher resolution.

Overall it is a good piece, a bit under lit.

Gwenouille, there is already small blur, in background, but very small. Also, I will try.

JohnV1960, I’m happy that my picture forced you to use your brain. No, I laugh

Cipix, Ok, I can change resolution of my texture.
And increase energy of AO, or Area.

Thank to you. :spin: