After years of going around the forum I thought I might as well post some of my work here =) !

This is a cycles render of the portal 2 turret. All is done in blender, including post processing with the compositor. 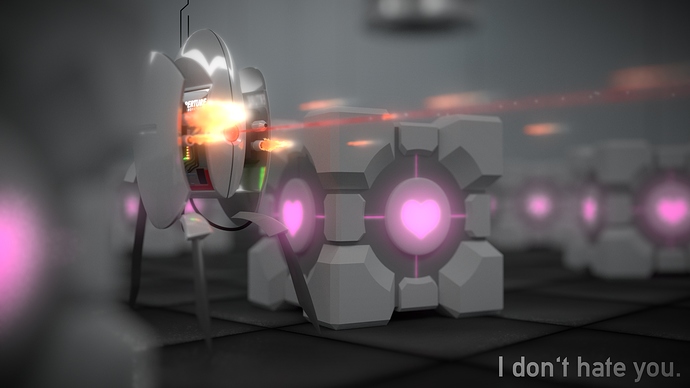 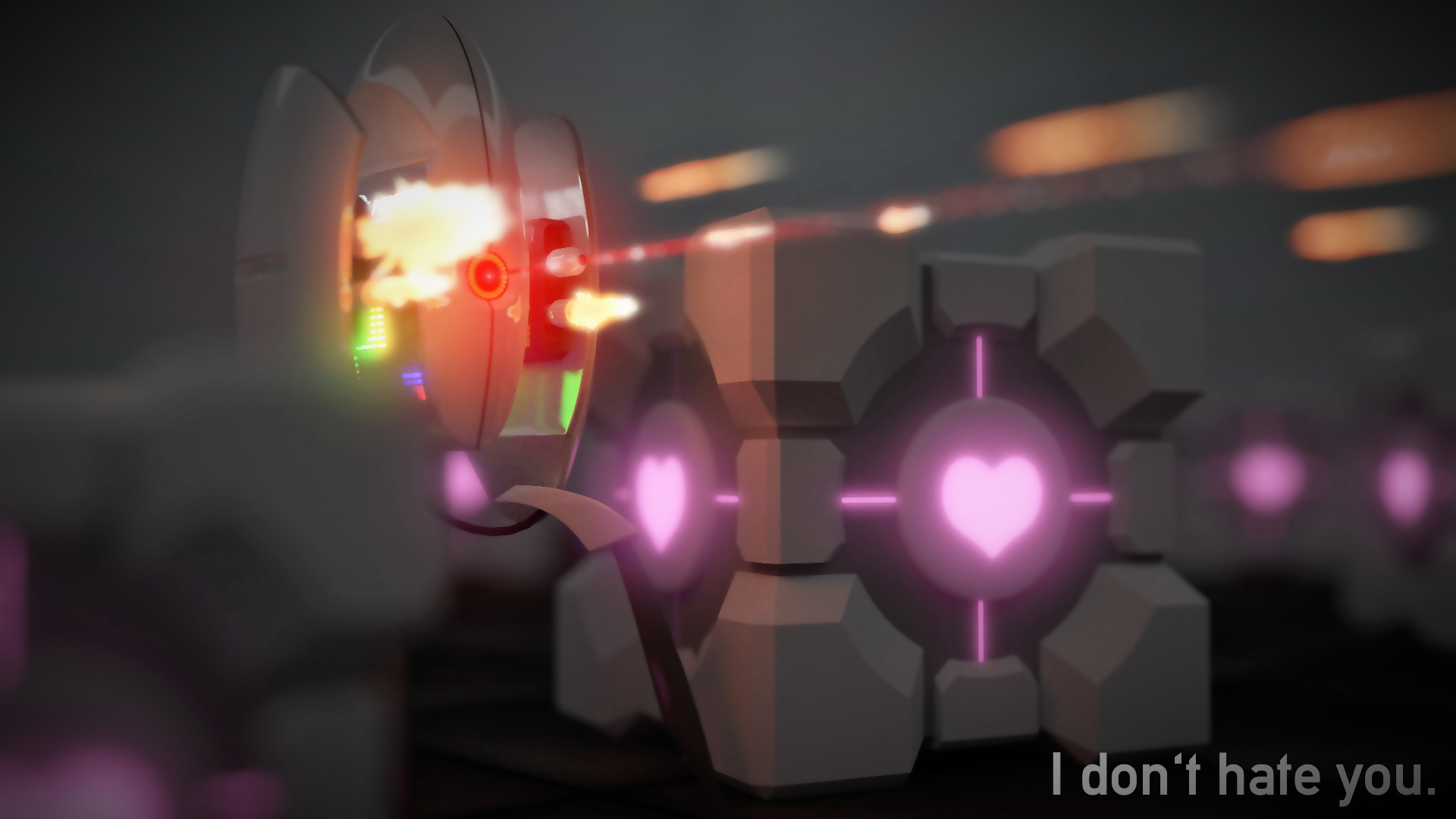 but I decided to brighten it up and slightly change the camera angle.

I’d be very happy to have your thoughts on this render !

About the angle, I think I slightly prefer the first one (on DA), you get more of the red glow of the eye. IMO it’s one of the more striking features of the Aperture 'bots, that glowing eye-piece - especially on the turrets.
Maybe add a tiny bit of texturing to the white material on the Companion Cube as well?

Other than that, nothing stands out to me.

I feel that the one on DA has better colour composition but this one has better object placement and framing(thought it can be improved). Try checking out the rule of thirds. Right now my eye goes straight to the box instead of the turret which i assume is suppose to be the focus of the image.

I agree with shakquan, I’m a little confused as to what the focus of the piece is supposed to be. My eye wants to focus on the turret, but the placement of the companion cube draws me in. I start focusing on the details of the turret and then look at the whole thing and realize I may not have been looking at the subject. I know what you’re going for, it just needs to be played with a little bit. Good work though, man that looks really nice!

Adding on to what Shakquan said: if in doubt, keep the main focus either in the middle or to the right.

Thanks a lot for all this useful feedback !

@Philippe M. I have to admit that I’m often lazy when it comes to texturing, everything here is procedural. I’ll try to get some dirt on the turret and cubes sometime though ! When you say that the turret is shiny do you means it’s too shiny ?

@shakquan I agree with your point of view on composition, I’ll try to improve framing or composition to make the cube a bit less attractive.

@Homeworkbad Same answer really, all of you saying that there’s something weird going on between the cube and turret suggests that things can be improved !

@Gordax I’ll try to stick to the rule of thirds for now, but if the cube is still intruding too much I’ll consider your tip ;).

As a result I’ve been tweaking my scene a bit :
I changed the camera angle again
The eye is in the intersection of rule of thirds line and hopefully more visible/obvious
Overall light was turned down a tad
I added a door in the back and a button in the front because the floor looked a bit empty to me before… 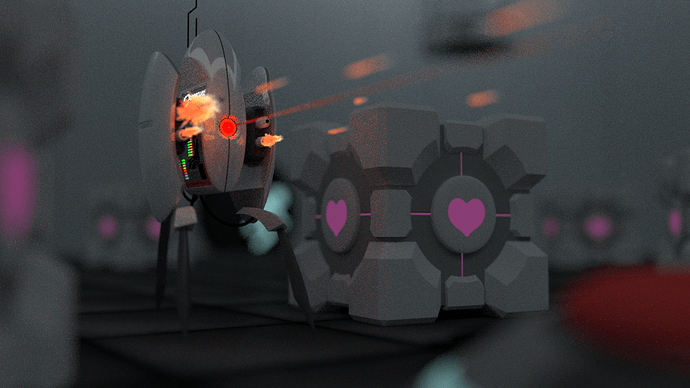 I didn’t want to wait 1h30 for it to render so this is 50% and 100passes only. Also note that this is raw render with no post processing, so there should be glowing lights (hearts, eye…), vignette… in the final image.

Much better. My eye went straight to the turret but it was forced straight back to the cube since it’s so close to the middle. Try blurring it a(tiny) bit.

All right I’ll try to move it a bit further from the camera DOF field so it gets a bit blurred, and perhaps work on the textures in the next weeks when I have the time. Thanks !

Looks fantastic, and so realistic!

My favorite is the original one you posted here. Not because it tried to focus on the turret, but because of the overall atmosphere and feel of the place. Good job.
Reminds me of Splinter Cell: Convicton for some reason, or Dues Ex: HR. I like it.

The Turret is Really nice, but I think that maybe making the scene brighter would help.

Thanks for these comments. Unfortunately I’m pretty busy at the moment due to studies so I can’t work on this as much as I would like to. I will eventually get back to it however !

oh yeah, just wondering, did you use bmesh for modelling the turret? or is it all using conventional modelling?

I checked your work and it’s pretty good as well !
I mainly used conventional modeling. I only used bmesh a few times in places that are completely flat or in places where I was sure that subsurfs didn’t have any impact on the mesh or render.