Here’s a scene I’ve been working on for a couple of months between exams and such. Its getting close to being a finished image so I wanted a bit of feedback

It’s still a bit noisy, but i dont have time for a high sample render yet 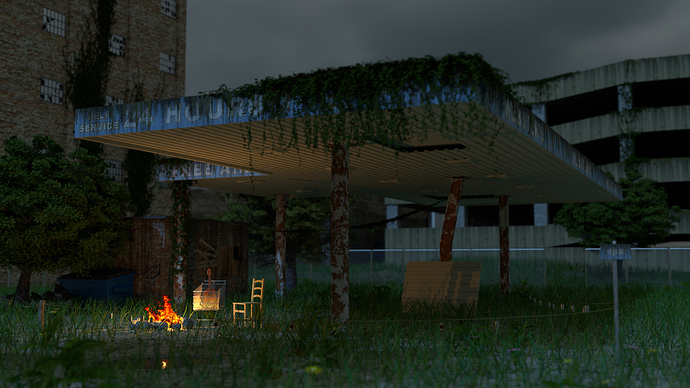 I think you’ve got too much ambient light around the sides of the buildings. The blue paint as well as the bricks appear too bright for this kind of weather. Looking at the clouds I’d say it would almost be dark and the fireplace would be casting most of the light. Not sure how to improve the flames itself.

I like the plants and the detail very much. Maybe add some more debris and random objects. The ground appears just a little too clean for this kind of scene. Paper and just scrap flying all over the place would maybe enhance it some more.

Thanks for you feedback. I agree with everything you said.

With regards to the flames, as cycles hasn’t got volumetrics at the moment the only way i could think to add fire was to use an image.

Looks good. I too agree with everything stated above. However I do have a few things to add. I think, based on the rest of the textures in the scene, that the chrome fence and shopping cart are incredibly way to clean. Bang them up some and add dirt etc. The chair should be missing something maybe…I like the sparsness of the grass…makes it appear as it is still growing…but add some weeds in to. Surely grass wouldn’t be the only thing growing…maybe some small trees too. This looks like an abandoned gas station, if so, where are the remains of the pumps? The building? Maybe make a pile of rubble, steel beems and bricks, to show the collapsed building?

For an alternative approach to the fire, I remember DatBlender (Not sure if that’s his BA username as well) did a fire test video recently: http://youtu.be/I9VPBfsykgI
It involves using the cloth sim, and I believe is rendered in Cycles. Maybe it is an option for you.

Here’s another quick render with a few additions, I’ve reduced the ambient light, changed the metal material, masked a dirt texture with the ground texture, sorted out some small plants and added 2 pumps. The render is very noisy but it’s just to show the adjustments. I’m going to try and add some more random objects and such as suggested. Using the cloth sim to achieve fire would have never occured to me, i’ll have a test soon 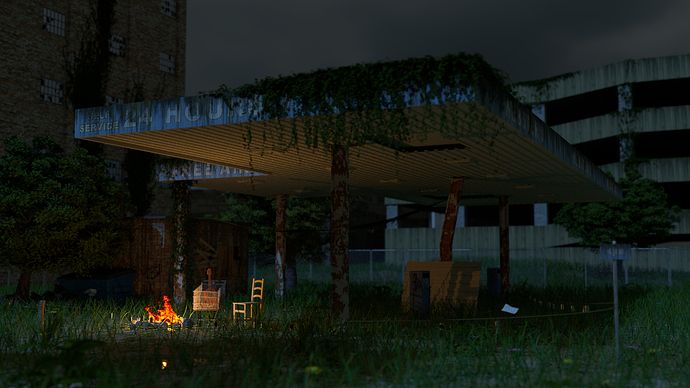