Hello everyone,
I started to work 2 weeks ago on a new character for the Blender Guru competition. I wanted to create a character evoking a post-pandemic world as a kind of tribute for some recent productions that I really like.
I also wanted to keep a cartoon look, I started with a quick concept art for this character: 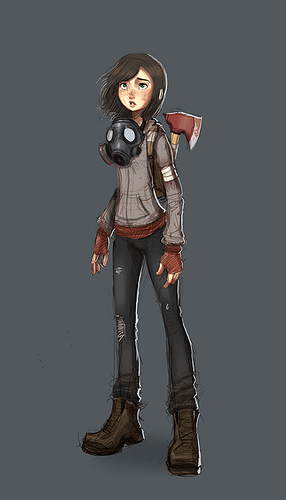 I model this character in blender, some HD sculpts have been done in Zbrush, rendered in cycle and composed in photoshop: 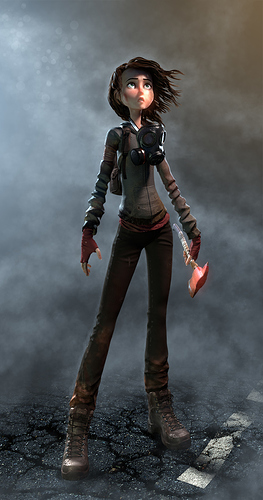 stunning! i love your work! but this one made my mouth stay opened!! thanks for sharing!

Congratulations on the win!
Really, very great job on the character, I have been following your stuff for some time, you’re a huge source of inspiration to me, and I’m sure many others feel the same.

Wow, that looks really good. Cracked road and smoke/dust behind the character are doing their “magic”.

this is beautiful! I love the style and the execution! Really great job! I do not know if the highlight on the face is slightly burned, but it is a tiny detail that really do not touch the overall beauty of your work!.. it could even depend on my monitor!

PS: it would be great to have an hires image to properly enjoy the details!

This is awesome, I love it. Think you’re going to win…

This is stunning! I love the character design and the illustrated style of the finished image. Very impressive and inspiring! Are you an illustrator by profession?

Absolutely fabulous work. 3 thumbs up for me.

Man this is the style I am studying so hard to master. Thanks for the inspiration it’s so nice to such work on BA.

The drawing is very good, but the 3D is even better!

Just amazing. I really love it. I do see that her feet don’t seem to touch the ground. Her feet and the ground has mismatching perspective I guess. Still, she is lovely.

I have a doubt though… on the contest guidelines it says that it must be done inside blender and with only minor adjustments in photoshop/gimp. So is using Zbrush allowed, even if the basemesh was made in blender?

I’d love for Andrew Price itself to answer this, but since there isn’t a direct form of contact with him, I’m asking here… because If I can use zbrush on the process, then I will certainly do, as I think it is better than Blender’s sculpting.

one thing though , that sleeve it seems that it has a life of its own

The way her hand grips the axe looks very strange to me. I don’t understand what emotion this is trying to convey. Otherwise, a great sketch and beautiful render.