Well, my previous project isn’t finished yet, but while I’m waiting for rendering to finish anyway, I decided to start working on something new meanwhile. This time Powerpuff Girls. At this point I’m not sure about proportions, maybe I’ll change something, but dunno, maybe not. Early stage of work, so no textures, no details, very simple materials. 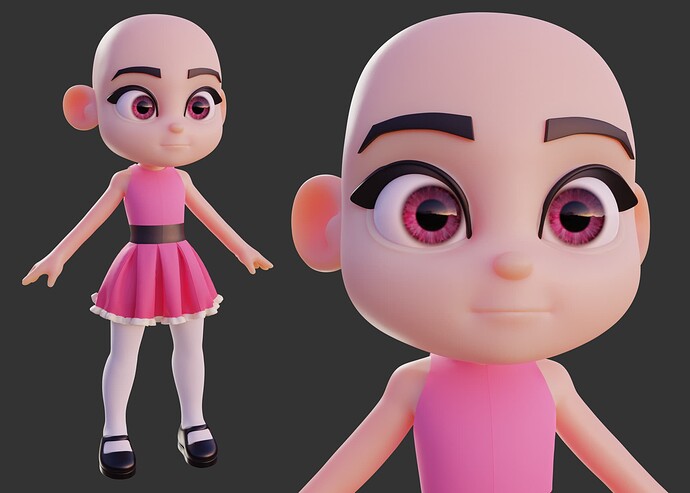 very good!! but the head is too big unless you want it like this, just make it fit.

@islara1 Thank you. I made the head bigger on purpose, because that’s the anatomy of the original Powerpuff Girls. But when I look at it now, I think you’re right and I should shrink it down a bit. Possibly I’ll simplify anatomy of the legs as well.

@Storekeep Thank you! I’m using Vanellope as one of my references, so probably that’s why you see some similarities

AH power girls!! i didn’t notice the title, than may be you want to make the hand and legs shorter!!

Does it look better, worse or no difference? 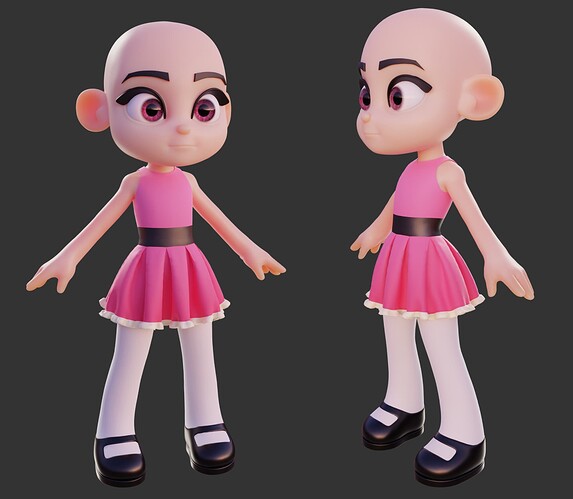 . Any tip on how to create the skirt? I’m really bad at it

Well, I’m also not very good at creating clothes. At the moment I do a lot of things just by eye. But the keyword here is Marvelous Designer. I highly recommend this program, it does a really great job. Some of the simpler clothes can be made by experimenting with the dimensions of the fabric, for others it is better to look for sewing patterns. If I had to recommend any source of knowledge, there’s a guy named Daniel on YouTube. On his channel he has a lot of several hours long videos showing the process of creating various clothes in real time. Sometimes I look at his materials to better understand how to approach various problems.

I kinda wanna see how the body looks twice as small. I think you should go absurd with it.

I see thank you for your time and information

Another change in body proportions. 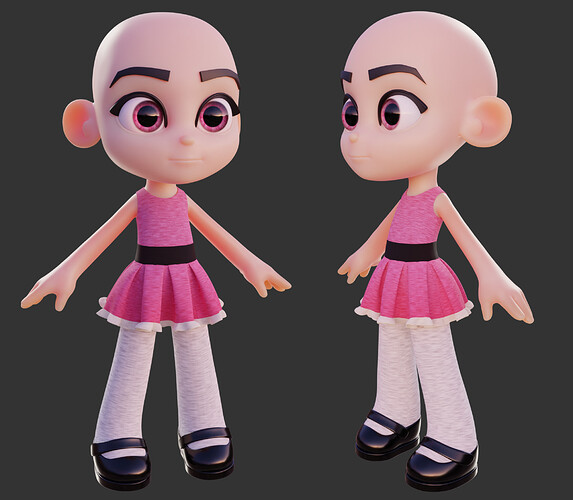 These proportions are so much better!

If you’re doing all three, are they gonna be slightly different in the face? Would be cool since you’ve got a more representationally specific aesthetic here to lean into their personalities a bit more

Okay, then this is probably the version I’ll stick with

As for faces, I’m not sure yet. For now, my plans are to make different shapes of eyelashes and perhaps eyebrows to personalize the characters a bit. Maybe some small details in clothing as well, I don’t know. Facial expressions will also play a big role, but at a much later stage of work.
However, when it comes to the shape of the faces - it still remains an open question. In the source material (but also in many fanarts), their faces are exactly the same. So it is possible that I will use the same body model for all of them, but I will make some minor differences in details, such as the eyelashes mentioned above.

Okay, I need an honest opinion. Is it worth continuing this project, or is it better to leave it and do something else? I am asking because I’m working on the second Powerpuff Girl and I still have the feeling that something is wrong.

fuck it, move on. It will always be on your hard drive. You can always bet on that late night spark going off in your brain. That “oh, goddamn it, that’d have fixed everything”

Might not be today, or this month, or this year, or even this decade. Big ol shrug.

Okay, I waited a bit to get the opinions together. I got 3 votes for “don’t continue”, 2 for “keep going, it’s cool” and one person abstained

So roughly mixed opinions. My plan was to at least finish all 3 model variations. But after thinking about it, I’ve come to the conclusion that I’ll leave it alone and work on another character. So as for formality’s sake I’m throwing in the unfinished, second version. This will probably be the end of this topic, unless I come up with solution what’s wrong with these characters. 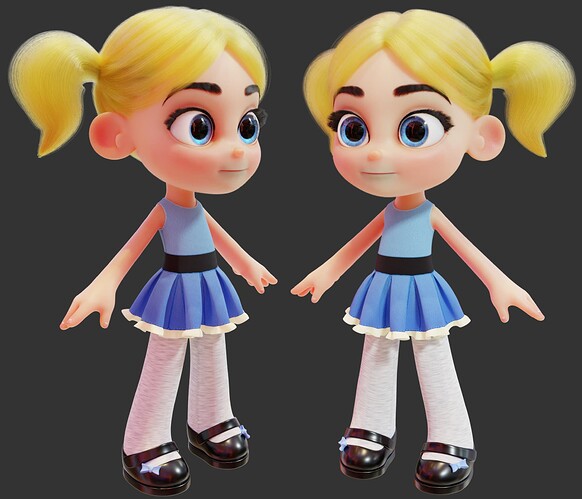 Hopefully the time off gives you some fresh eyes if/when you come back to this.

I think they are great, honestly I think you are probably at a stage where it feels off because its feeling a bit doll like, if you add an emotive facial expression and stance it would probably bring a lot of life to it. Even the 2D powerpuff girls were always full of expression that highlighted their personalities.