Been tinkering with blender on and off for the last several months when I can after work, haven’t really used CGcookie until recently which has helped me in learning blender tremendously. Still on the basics but, I like to think Im slowly making progress. None of this is to scale, as I have yet to Master that art!

Been practicing with use of Shaders, Boolean Modifiers, etc.

The first picture, is what I call the ‘Open Shower’. One of those where i was playing with various blender functions, Using Boolean Modifier to make a drain in the floor and then cubes with Boolean to make the drain holes in the drain cap. The ‘rail capping’ to the purple panes, i used Extrude, Rotate (Axis locks), and I believe a cylinders. The rails are each separate objects for each direction which I plan to fix if I can figure out how to do so effectively. For lighting I used a ‘Point Lamp’ with a medium light strength. Used a velvet shader on a flat cylinder to make a bathmat. T Tube Pipe joint (Addon) for a towel rack. ((No there’s no toilet yet… One thing at a time!))

Second picture is the Kitchen/Dining area. This was probably the biggest challenge, me trying to follow a Sci-Fi esque theme really struggles here. Closest thing to it right now is the Fridge but it is made up of so many objects its not funny. If you saw the Outline for it, you’d talk about overuse of objects to do something simple. Im wondering if I cant do the base fridge using a Boolean modifier with a single object to make the angles, and holes, and a single Cube with emission shader to make the glowing channel ways on it. Don’t have a good picture of the sink, but I used A Shaped/Extruded cylinder to make drains, two cubes with Boolean modifier to make the sinks in another cube receded in the countertop. Have yet to work on the ‘Cooking range’ and Oven even though I have the face of the oven started.
The dining area, 3 barstools, made using a Torus, Extruded cylinders and a UV Sphere. Table has its own stand that looks like it part of the bed ((Due to the shaders used, having same colors and my laziness.))

Lastly…The Living Room, Bedroom combo. The bed, I used a stretched cylinder as the take away object for the bed, using 50 vertices set in operator panel ((Thank you Blender cookie!)) I extrude edges of the cylinder to make the inside roll alittle smoother when transitioning to the top. There is a spot light a object above the bed to give a mood lighting maybe. Again I used cylinders with Axis locked Rotation and extrusions to make the decor ‘edges’ of the bed. The bed happens to double as the couch, haven’t gotten started on the cushion/mattress yet, still figuring that out. THe Purple Transparent/Lucent flat cubes are supposed to be holoscreens which I obviously have failed at!

I am 100% positive there is more I could do to make all these better, which is why Im posting these up here! I know the lighting is bad , sorry! 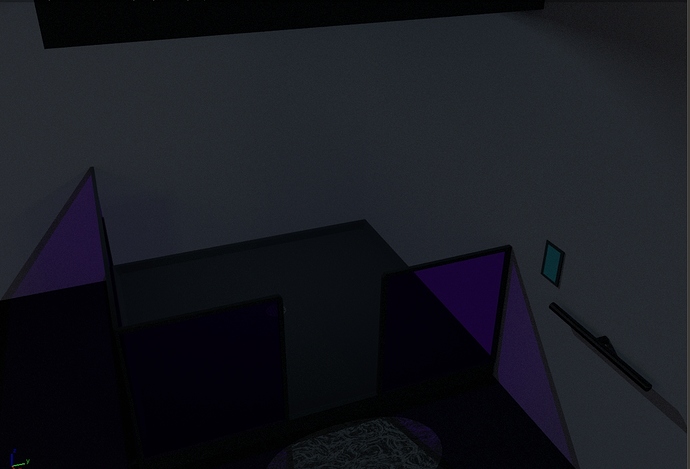 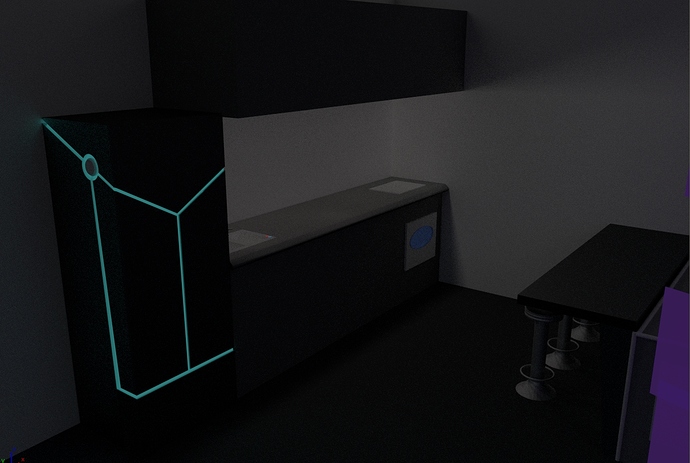 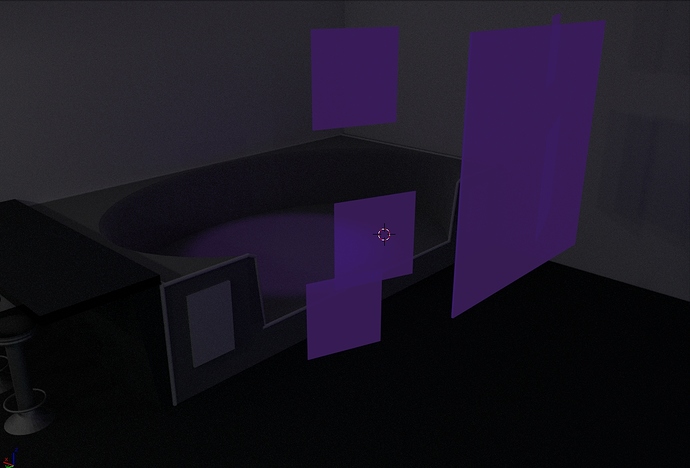