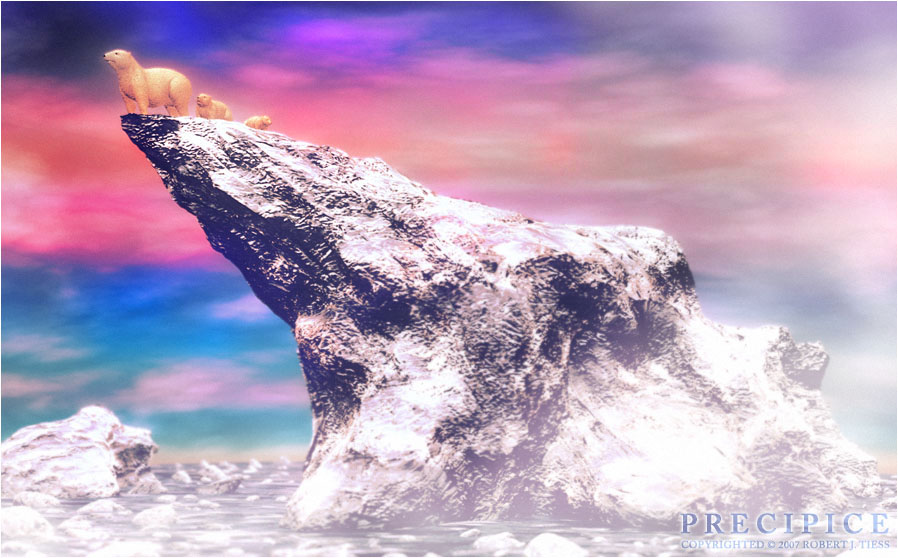 I wanted to do something special with the main rocky/icy formation where they stand: it contains two head shapes as part of the larger “precipice” meditation.

On the left there is one like a polar bear (side view) looking left/up (the older living bear stands on the “nose”). On the right there is a side view shape of a human face/skull looking right/up.

I opted for proportional editing for sculpting.

Foreground mist/fog/vapor was painted right in Blender (as a new image) and composited in render nodes (render layer set to screen).

A little de-/saturation and contrast tweaking was performed in post.

Nice one RobertT: I like this more than some of your others. The angles of the rock draw your eyes straight up to the polar bears and the top left quarter of the picture. I don’t think I would have found the faces without knowing they were there because the polar bears and sight lines draw you straight to the top left and the fog almost implies there is nothing important in the other areas. Overall though I am impressed, nice job.

I can’t see the image…

ah, there it is. never mind.

I’m not so fussed on the composition (the image sort of launches you out of the top left corner) and the colours seem either over exposed or far too saturated.

robbur: Thanks so much! I started reading your Precision Modeling book earlier today, and I must thank you for creating such an intensely informative document. There’s always more to try and learn with Blender.

traitor: Thanks for the posts. The image should be loading now. For some reason my host was unavailable earlier for a few minutes. Based on your second post I did make another adjustment to the saturation and gamma, although colors and exposure looked fine here.

The diagonal composition has subtle bidirectional aspects, one (going right to left) I had in mind being humans becoming lost/forgotten if they make the mistake of turning their back on nature, falling out of balance with it and/or failing to look ahead at their impacts on the environment or at least admit some serious changes are on the horizon.

A tighter composition that was considered at one point was a portrait orientation focusing on the left side of the image and only the bears, but that would have left out half of the behind-the-scenes reason this image came to be, even though in the lower left corner, out further, there was another vaguely face-shaped ice mass to carry that aspect of the image if I decided against the wider view.

What helped decide it for me in the end was what helped portray the desolation and enormity of the circumstances and the smallness of these larger powerful creatures which at the same time could have a sense of powerlessness and inevitability and ambiguity in the air. Juxtaposing those ideas and elements seemed to stronger support the “precipice” situation rather than for settling on a closer and less angular view that could not produce a sense of imbalance (i.e. a tipping of the natural balance of nature).

I like the mist and the rock, but the sky could use a little improvement with the color.

All in all nice as always.

The composition is(as traitor said) questionable. The bears seem to have seams at the beginning of all their legs, the contrast looks very wrong…

I dunno, even the concept isnt enough to really hold it up. Im not gonna rate(that whole system is completely overrated anyway), but Im not into this one.

I think the surreal sky gives this its impact. The warm colours shouldn’t be in the arctic but represent an overheating atmosphere with the polar bears looking out over the edge of a rocky outcrop that should be covered in ice. Is it the bears looking over the precipice or is it us looking into the precipice of global warming?

Reminds me of the movie: Earth.
Well done.
Perhaps that the fur and color can be more intensive.

Hi RobertT.
I knew instantly, in light of earlier work from you, that I was supposed to look after a face or two in the precipice. Before I read your text though I was unable to find these faces much like robbur.
Precipice is a nice word by the way, very fitting. Did you perhaps come up with the title before you actually made the piece, and if so, is this the way in which you usually work?
I’m often impressed by your texturing work on rocks and cliffs and whatnot and always wonder, is it procedural?
Is it?
The colours are nice, my only crit would be the feeling of almost “over-exposedness” in the lower right
Beautiful piece nonetheless, good work RobertT!

I love this piece !!!
My favorite part in it is the colour of the sky !
However my only crit is that the iceberg the bears stand looks too rocky…

Wow, I love it. Very artistic…