My first Blender game. It’s pretty awesome I must say. There are four possible endings and a secret level. Try to get everything! It only takes about 8-12 minutes to play through depending on whether you find the secret level or not. It’s not possible to lose exactly, but you can get the bad endings. Getting the best ending is tricky. Hehehe.

What’s your game about? can you put some screens?

I get permission denied when pressing the link. And yes, some screens would be nice.

It’s not much to look at. Here’s the title screen: 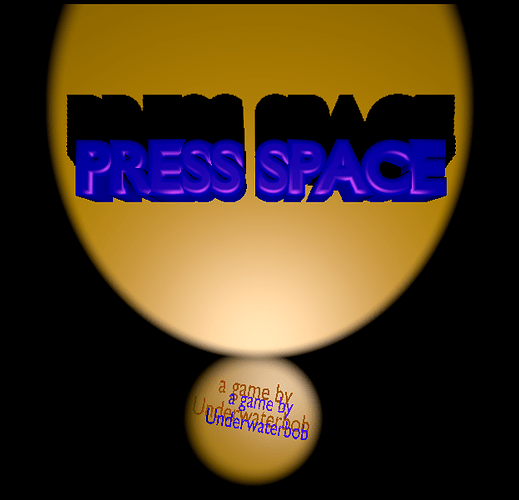 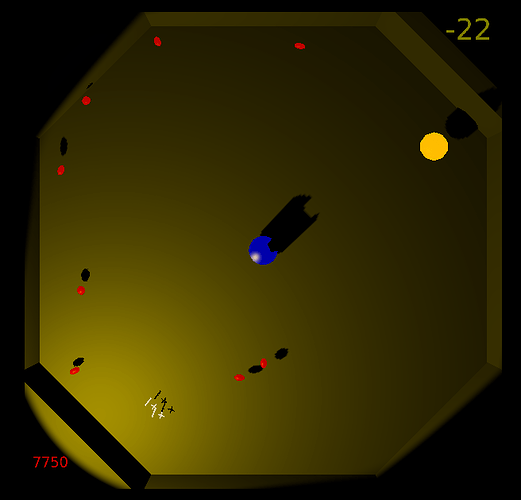 Yes, my score is -22, I was hitting alt-prtscr thank you.

I refer to it as a “SIBH” (Self-Inflicted-Bullet-Hell) game. Basically you shoot at yourself, try and survive the hoard of “globules”, and score points when they collide with each other. Basic risk-reward gameplay: if you shoot a lot, you can score a lot, but it’s easier to get hit. If you shoot less, it’s easier to not get hit, but you won’t score high.

The second screen is a little old, I made the “character’s” hitbox a little smaller, and based on an inner, smaller sphere. There’s sort of a plot I invented in a drunken fury, but I won’t spoil it here. Four different endings! Awesome secret stage!

No fancy models, but lots of fancy lighting and text-effects. It runs great on my dual core, 4 gigs of ram, windows 7 ultimate, Nvidia 8600 GT- 256mb.

Hurgh, OK, Mediafire has decided my own work is copyrighted and cannot be shared. What gives them the right?

Apologies, apparently Mediafire have decided that my game is copyrighted and that it can’t be shared, despite my having created the entire thing, music and all, using open-source software. I sent them a nice stern question as to what gave them the right to decide that my work was copyrighted. Hopefully the situation will be rectified soon.

I advise against using Mediafire. They keep saying my work is copyrighted and I have not received any replies to multiple queries to their support.

Here’s a wikisend link to my game: Link timed out. Send me a PM if you want it.

Thanks, I have an error at execution, I’m on Windows 7 32 bit

Yeah, I’m pretty sure it only works with 64 bit windows. Sorry, I thought I mentioned that.

Doesn’t work for me either cause I’m on 32 biti but from the screenshot why don’t you move the light much higher?

Ambience my friend, ambience. There’s four different coloured spots, one in each corner, they fade in and out over each other.

Nah, that’d make it too easy. If you mash too fast, the globules spawn close enough together to eliminate each other immediately. Mind you, you have to mash at around 17Hz, which is world-record territory. That’s not too hard to hit in spurts, but pretty much impossible for a human being to sustain.

PROTIP: It’s easy enough to get a high enough score to get the bad ending. If you want the secret level of awesomeness and the best ending, you have to try much less hard. But… don’t not try too hard.

Only four days left on my upload. Get PRESS SPACE now!

Link’s timed out. Send me a PM if you still want the game.