As in the title, how would I limit the child objects scale so its unaffected by the parent in the GE. I don’t want to do individual keyframes to keep the scale at normal. An example is a water geyser with a rock.

dont parent them, use two animations, on for translation, one for scale. another solution could be an armature with a bone weighted to the top half to have a scale-like effect when moved.

scale in bge is just nasty, avoid where possible.

For me, I had the same parent scale effecting children scale when making crouching functions.
Solution is to assign all child scales after the parent scaling operation, that way, they all stay at separate scales with no visual children changes except the desired scaling for the parent.

Hi I am crap with python or any coding, but can you explain what the words in this mean so I can apply it to my own game?

Lines with for child in self.owner.children:

image2113×1048 214 KB
So, this is what I have, and I just want to make sure I’m doing this right
I’m probably just missing something silly, but this doesn’t make the parent change scale when I press the lefts shift key.

If you know what’s happening, please let me know
If not, is it too much to ask for a blend file?

My script is setup as a module. Nothing is working for you because nothing is calling it on your end. You either need to change your Python Controller type from Script to type Module. Or you need to add crouch() at the end of my script on a new line if you wish to keep type, Script for your Python Controller. 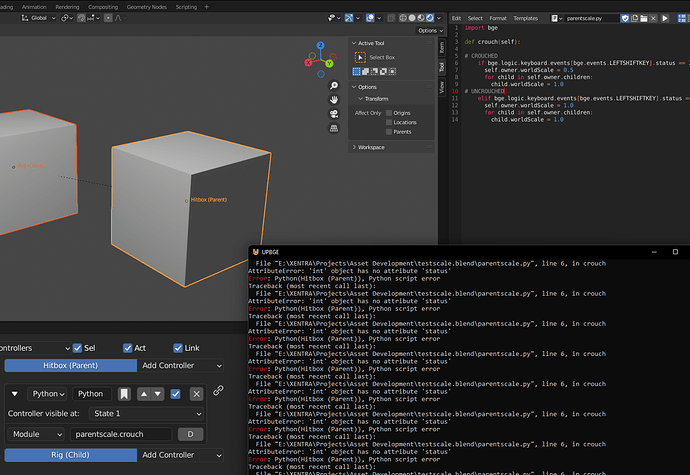 image1467×1011 259 KB
Hi,
thanks for the quick response, and I apologize if I am asking too many questions,
but it’s having a problem with ‘status’ now
I also notice that words like ‘self’ and ‘child’ aren’t colored in my script but are in yours, so idk if something else isn’t working either, or if that part doesn’t matter
Thanks,
Nick
RPaladin July 23, 2022, 4:00pm #11

I apologize if I am asking too many questions,

No problem. This is what this forum is for; helping and uplifting others.

but it’s having a problem with ‘status’ now

Sigh. I’m not sure why I put that there. I think it was either a BGE or legacy UPBGE implementation that never got implemented into UPBGE 0.3+. Anyhow, just remove that .status part. I also added .z to the end of all of the .worldScale methods, as the crouching should only affect the z-axis. In the past, I think I rush coded my post because the lines weren’t even properly indented. : - )

My script coloring comes from forum syntax. Not Blender syntax. They have different theme colors.

Thanks! It works!
A tiny thing that I notice is that the child shifts down a couple pixels when I do it, but idk how fixable that is

EDIT:
I fixed the shifting down thing
It was just cus before I started the game, the child was shifted a couple pixels up

Oh, real quick
How would I make it always crouch when the script runs, instead of just when pressing left shift?

Or, what I mean is, make it always crouch when the sensor in the logic bricks is being activated, but uncrouch when it isn’t

A tiny thing that I notice is that the child shifts down a couple pixels when I do it, but idk how fixable that is

Yes. This common with meshes that have their origin points at the center of their geometry. Here’s a script that will compensate the location offset manually. 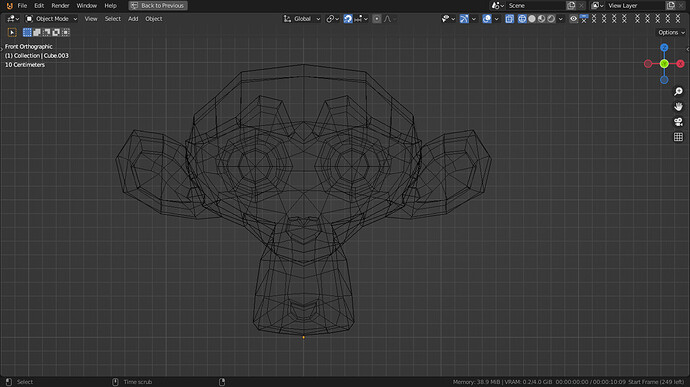 How would I make it always crouch when the script runs, instead of just when pressing left shift?

For 1 time on controller run:

If you have true-pulse enabled and want the controller to run continuously:

If you only have one sensor just replace "Always" with 0 to indicate the first sensor.

make it always crouch when the sensor in the logic bricks is being activated, but uncrouch when it isn’t

Take a look at my new script and if anything doesn’t make sense. Feel free to drop a post.