I’m trying to create a little animation to show the printing process of magazines, newspapers etc. What I’m trying to do is set up each of the colors CMYK and show how when the paper hits each of the stage the image is layered to create the final result.

I’ve set up a long rectangle for my inflow hopping that would produce a thin stream of ink. Unfortunately it seems to be coming out quite thick. The second issue is there seems to be squaring off once the ink hits the roller which is the obstacle. The last item is I’d like to know if you can hide the outflow or even have the ink go around the roller.

I’ve attached some screen grabs to show you what I mean. If anyone has any suggestions it would be appreciated. 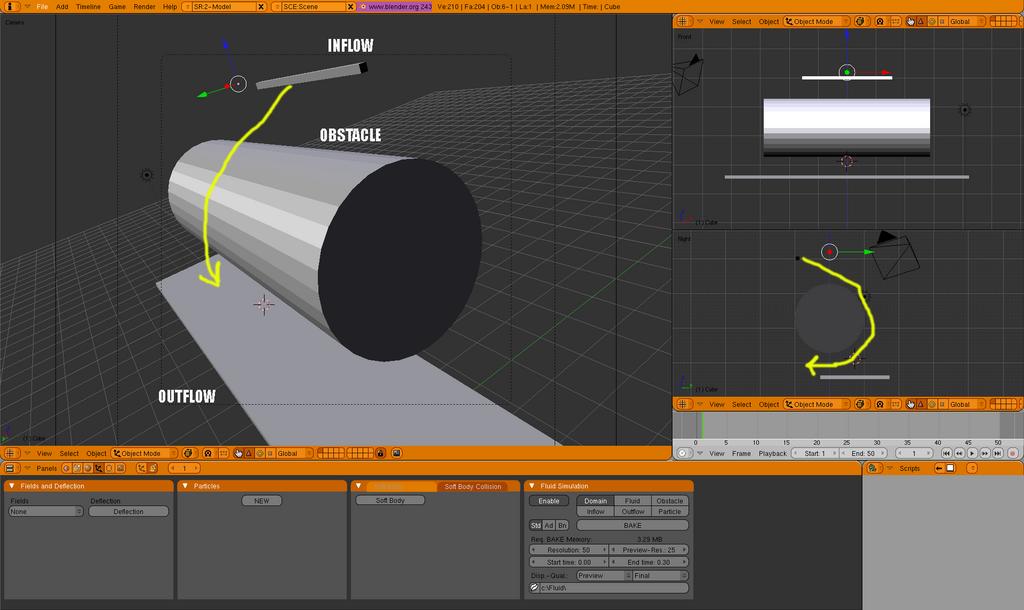 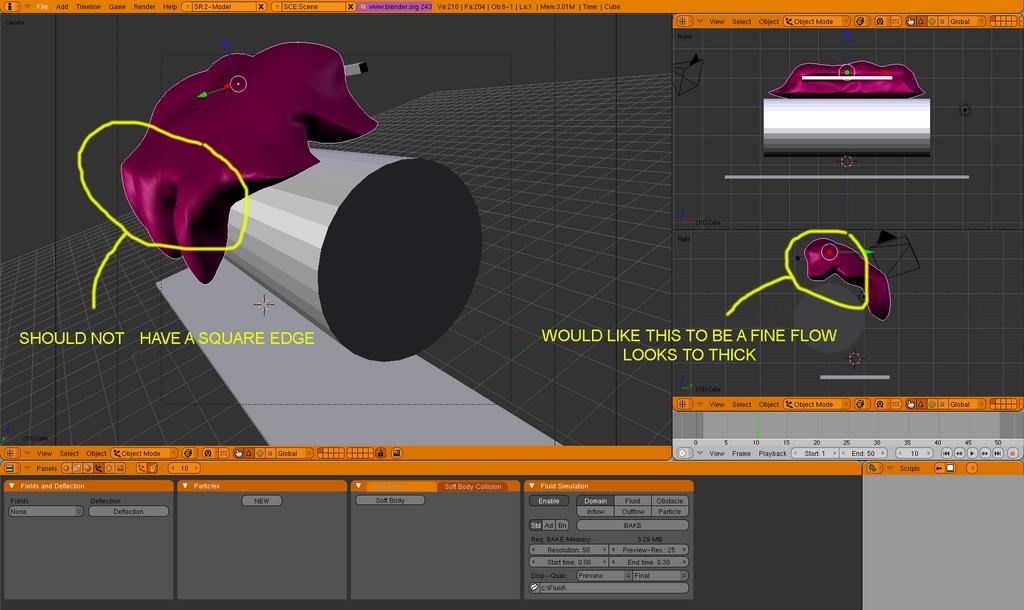 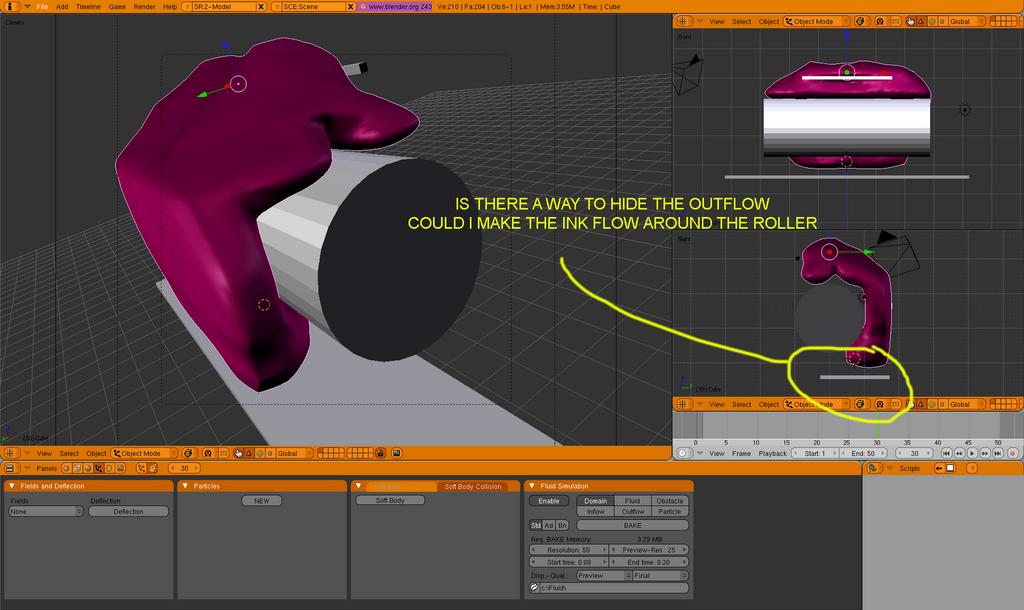 I assume you’ve read the wiki and doco so i wont bother answering the thickness question cause all you have to do is re-read the viscosity section. The squaring off is probably hitting your domain side. enlarge your domain. I dont see a surface tension setting which is why the ink would cling to the underside of the roller. Also you might want to increase your resolution to get rid of the bumpiness.

To make outflow “disaapear” you’ll have to put it into a cup. If the cup happens to be the same color as the background and shadeless, the ink will disappear.

For how thin you need the ink to be to look realistic, I think you would be better off using an animated texture instead of fluid dynamics.

Thanks RogerWickes I had a look at viscosity section and even setting it to manual at Value:10.000 and Neg-Exp :10 did not seem to make it thin enough. You where correct about the domain I made it larger and the squaring disappeared. I found that if I put the outflow on another layer and hid the layer is disappeared but still worked.

I think your right RobCozzens I might be better animating a plane coming out of the ink system onto the rollers and onto the paper. Unless someone can suggest some settings that may make the fluid thin enough to slide between the 2 rollers. Still working on this but I’ve got a problem and I’m hoping someone can point me in the right direction. What I need to do is have the image on the paper animate from the bottom of the sheet to the top. I tried placing and empty and setting the map input on the material to the empty but the image just went crazy. Is the another way? Why does the image distort to much when it is linked to the empty?

Any suggestions would be appreciated. 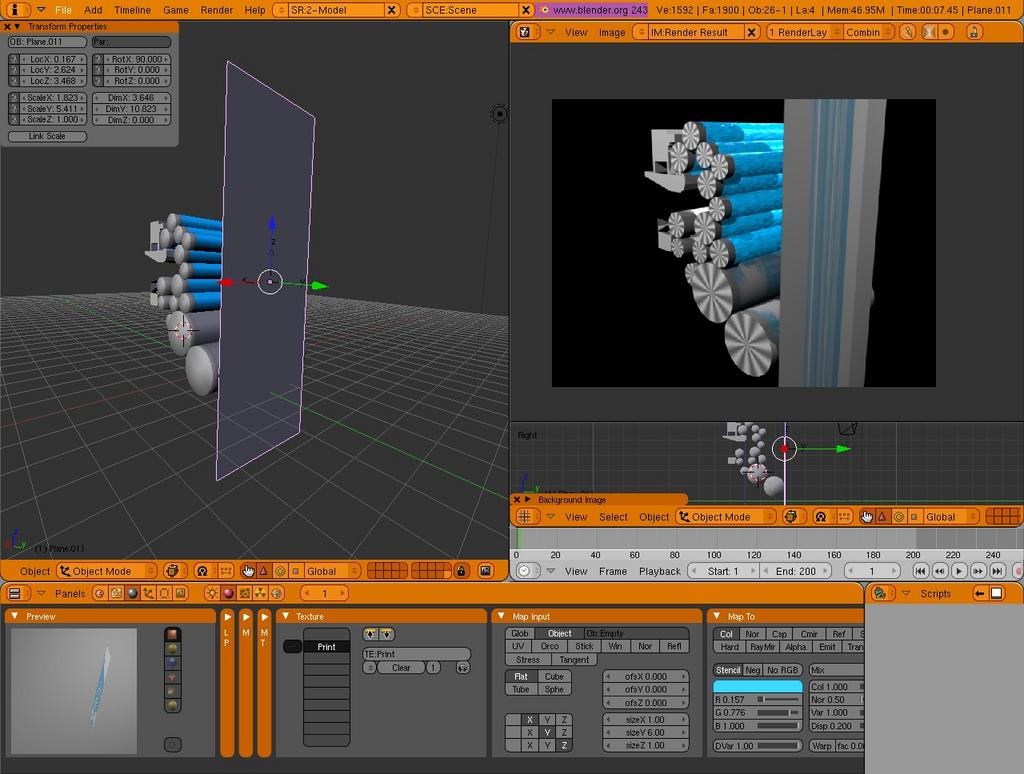 I finally worked it out. I decided to create a test of just the paper and have the image run across it. From the top view I created a plane for the paper and then added and empty that would be linked to the material. I added the image in my material and then selected the object option in the map input tab and type in empty as the Ob. Moving the empty along the x axis results in the image moving along the paper. If I rotate the paper 90 degrees and leave the empty in the same place I get the sort of distortion seem in the previous post. Anyway hope this helps anyone else how may come across a similar result and not sure what is causing it. 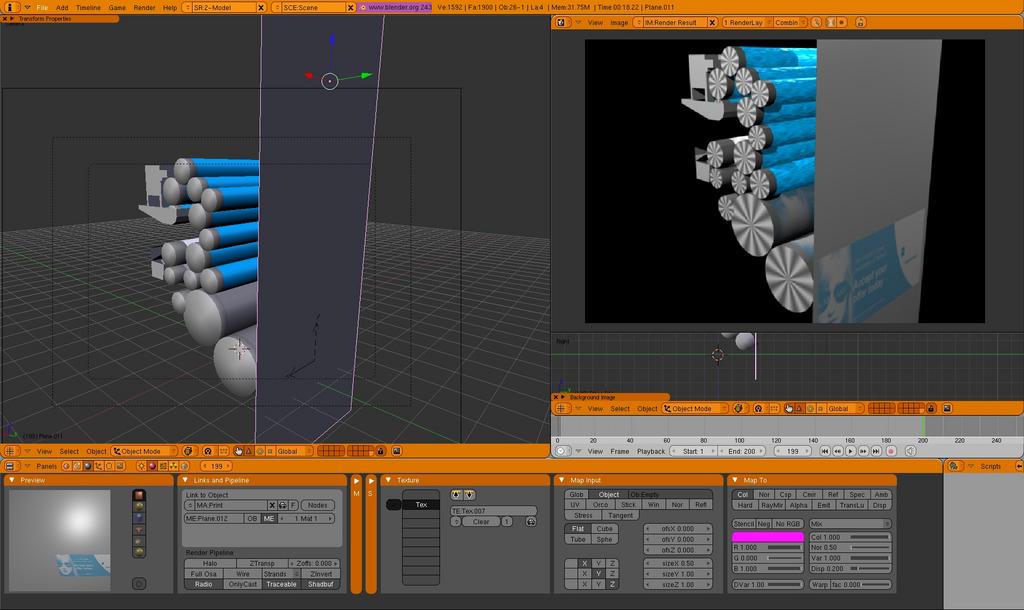 Maybe it’s just because of my general unfamiliarity with the toolset that you are trying to use here … but I think that I would probably try to do something with surfaces.

As I see it, at the end of the work-day “either you’re going to have an effective illustration, or you are not.” If {whatever you have done} clearly illustrates the concept that you are trying to illustrate, then “you have succeeded” and it really doesn’t matter too much just how you did it. Therefore, the simplest image that will demonstrate the principles of printing … produced in the simplest, fastest, least-complicated (for you) way … is probably the best one.

And what troubles me with your initial approach is that you’re relying upon the computer to do a lot of tricky mathematical thinking for you. And you’re tweaking a bunch of parameters (for quite a long time, apparently) trying to make it generate something. You’re controlling the machinery from a “handle” that isn’t firmly and directly connected to the machine: it’s an indirect control, separated from the end-result by a considerable mass of computation.

There are, of course, “many ways to do anything.” And it can be hard to let go of the first approach … especially when you have invested more-than-a-little time into pursuing it. It might feel like “giving up.” It isn’t.

I would simply make a plane follow a path, and prepare a suitable “printed” image on the surface of that plane, pulling a mask so that more and more of that “image” was revealed on the plane as it advances forward, such that the image seems to “appear,” little by little, right where the ink supposedly hits it. Set the two animation-curves so that they are perfectly synchronized. Now, add a little particle-effect to illustrate the action of the ink-feed.

(If you want to illustrate a rotating cylinder which seems to have an image attached to it which changes as it rotates, create a bitmap of the entire image and then map it to the cylinder’s surface through a sliding viewport. Add a little spinning-wheel effect on the visible edges of the cylinder. Then, slide that viewport. As you do, the image will seem to advance across the cylinder. Put the two together, as your eyes will do, and presto … rotation.)