Problem rigging eyes with Track To

Hello guys I’m am very new to this forum and very new to blender as well. I’ve modeled some simple things in the past but I decided to go in and finally make my first character model. So I wanted to follow a tutorial to learn all the basics before I design and model my own character.

So I’ve got these eyes I want to rig. The eyeballs themselves are parented to two cubes that act as “latices” (i’m guessing from my basic knowledge) and stretch the eyes because the character is cartoony. So I select the eyes, go to the constraints put on a Track To and put in the appropriate bone that I’ve created but the eyes rotate in a strange direction. There’s probably something that I’ve messed up along the way. If someone can help me rig the eyes with that Track To method and see what’s wrong I’d be very thankful

P.S. I would like to know about other methods to rig this type of eyes.

Thanks in advance everybody. 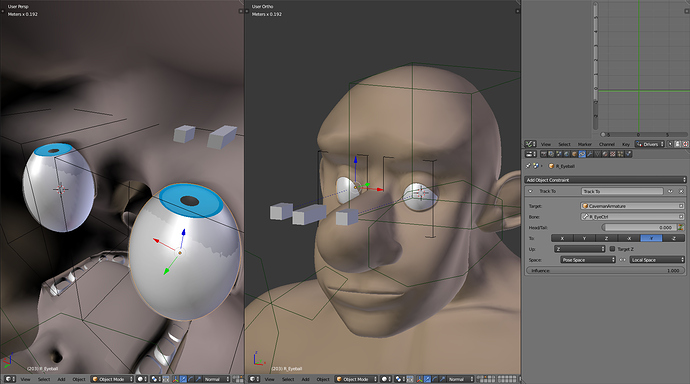 Here’s a link to my .blend file. Also please suggest where is a more appropriate place to upload my blend files.

without having seen the blendfile: try to change the “to” in the constraint to “z” and “Up” to “Y”…

Thanks for the reply, I’ll try, but I’ve put a link to the blend file

edit: What you suggested works, but the eyes go a little bit inward, like cross eye … I can’t explain it really well I’ll just post a screengrab 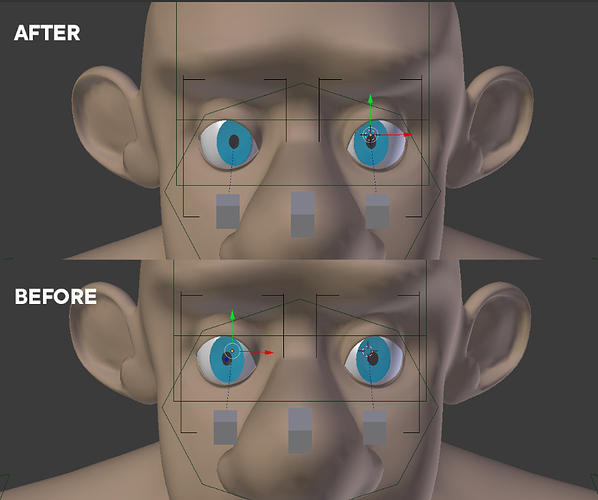 I just want to know what causes this. And why did I have to change the TO to Z and the UP to Y. I’m just curious and if you could explain that would be splendid. Thanks in advance and again thanks for the quick solve @ar2 !

on the left side of the first image I see that the pupil of the eye is orientated in z-direction - and the pupil is the part that has to be tracked to the target.
At the moment I don’t have the possibility to look at the file, cause I’m not at home.
Concerning the cross-eyed look: I have the impression, that the pupil may not lay exactly on the z-axis of the eye - I guess that you may have turned the eye in edit-mode.
I think in the uppert part of the last picture the eyes looks streight (you can see, that the pupils are centered on the track-lines - in my opinion it’s on optical illusion because the inner part of the eyelids are closer to the pupils than the outer parts.

Thanks, with your help I’ve fixed it. You may be right about the “optical illusion” btw, I just noticed that they changed rotation when I put the Track To. Anyways I fixed that now by pulling the bones that they track a bit further apart.