Does anyone know how to best texture a huge landscape in blender?

I want to model one single hole of a golf course.
This should not be renderen in blender, but used in an external 3d library in the browser (three.js)
My basic object is a huge plane (500x500)

First I tried to use texture paint, but this did not really work because of several reasons:

Then I tried to subdivide the plane several times and select faces to assign textures to them.
This worked very well since I had better control over: changing the texture / size / offset etc., but the problem was that a face is 2x2 units, so I have a high pixelation whan assigning textures to a bunch of faces with such a big size.
I cannot subdivide any further since then there are too many faces.

Then I tried to create several objects (for the bunkers, the green, the fairway etc). I was able to texture them very well, but the problem here was that at the end I was not able to connect all this single objects together to one big object.
But without doing this I get a really ugly flickering with al the faces overlapping…

Do you have any idea, tip, tutorial?

I think texture draw does not work for me.

The best is probable to model the golf course in a plane but I do not really know how to do this.
I am able to create the single objects (bunker, green etc.) but I do not know how to connect them at the end

Here is a picture so you know what I mean: 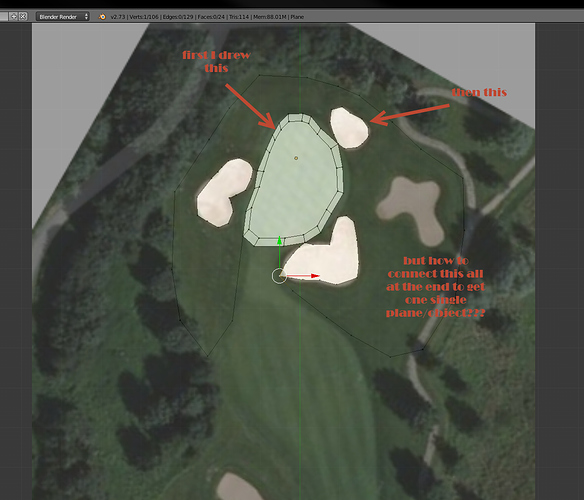 Would be great if you can help me!

you have to plan your edge loops somewhat so that the polys line up where they need to be joined. just take what you have and make some subdivisions here and there, then use bridge tool or grid fill to fill up the gaps. 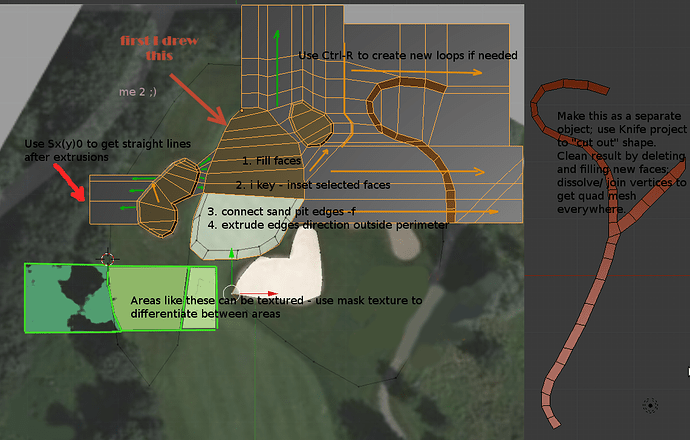 Hope helps somehow…And do not hesitate to delete chunks to make result better.
In fact you probably need to face skin sand pits only to make them more 3d; paths could be drawn on texture.

Thanks for your replies.

At the moment I try to use a different approach:

This works very well although I really had (still have) problem to understand the whole connection between: faces, materials, textures, uv maps, etc…

But now there is another problem:

After I assigned the correct textures to the faces it looks a little bit artificial since of course there are hard borders between the textures now and also the textures themself look very boring since they are repeated tiles.

What I would like to do is, after texturing the plane:

After having tried a lot of different things I don’t know if this is possible at all to have textures on your plane and then have an extra layer over the whole object where you can paint on to improve the look of the landscape.

Do you know what I mean?
If not I can upload some picture / the project file.

Have used Gimp or PS before? If the layer above is opaque you are not able to see layers below. Set texture layer mode to multiply, add, overlay or any other mode you need and you’ll be able to paint and see the resulting mix operation.
If you have assigned textures to faces you likely would need to bake one large image to be able to use baked texture and another one you would paint on.
Cycles has Color Mix node, BI -Texture Influence panel, mode selector.
For the most advanced texture mixing read here or here.
Check on Google for “blender texture splat” .
Hope this somehow helps.