for weeks I try to rig this hydraulic in blender.
Does anybody know why the axes of the rig flip when it passes the plump line?
I suppose may be the disks at the ends don’t know how to act.

Does anyone know how to rig this hydraulic right?

Here the blendfile of the hydraulic:

An here an overfiew over the IKs and Constraints: 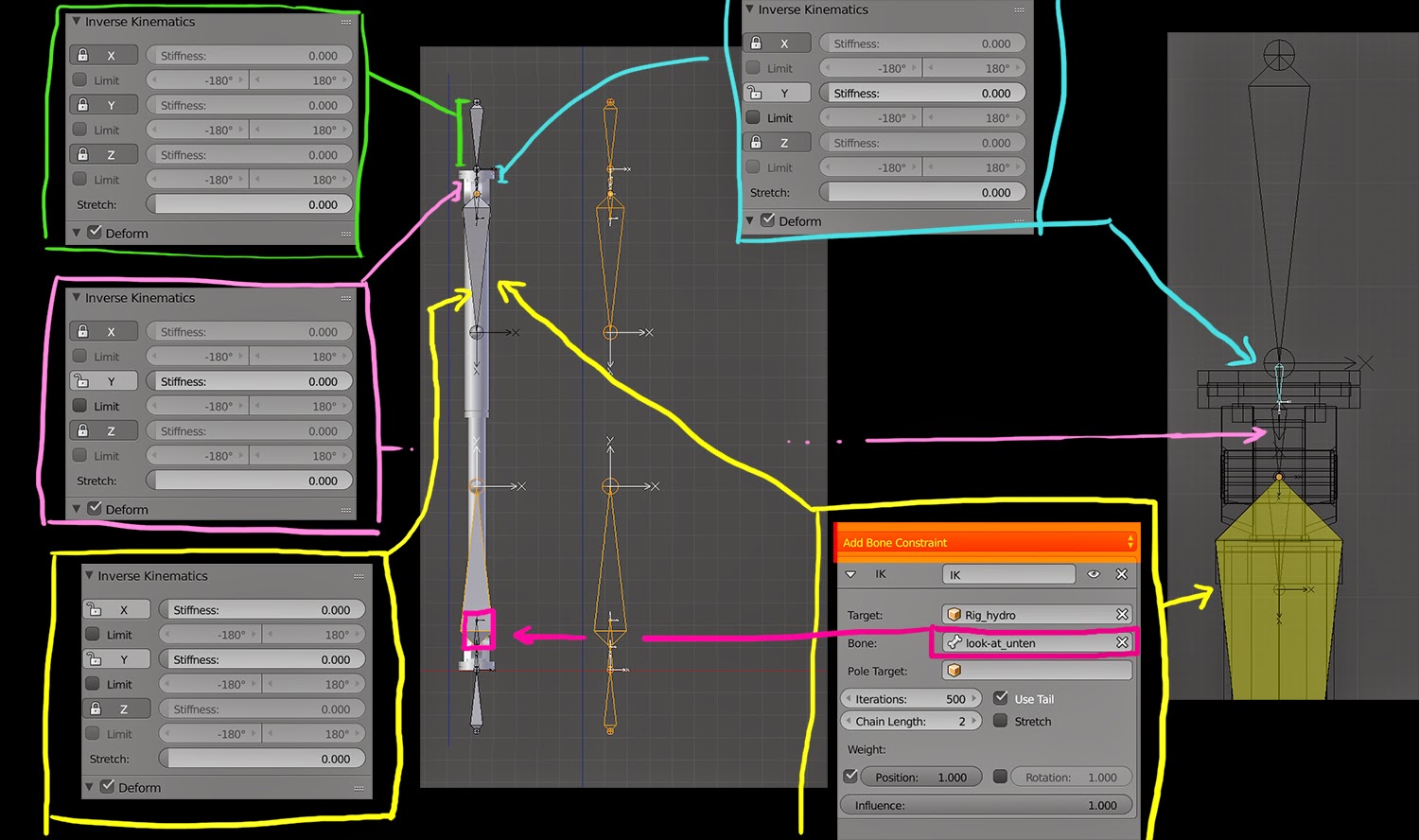 if you use a pole vector, it should take care of the flip.

bone for the disc doesn’t work.

, it solves the probem for the axes. But then it gets an other problem.
Then the Inverse Kinematics of the bone for the disc doesn’t work.

This is not how you rig a hydraulic cylinder, I am afraid to say. :no:

and a lot more besides for good measure! (just press Play to see it all working).

The bones flip because they are trying to keep their Z axis pointing upwards, you will not solve the issue IMHO unless you rebuild the rig to a more simple method as shown in my enclosed blend file. This gives two basic methods, with variations on each, using either bones or constraints. Take it to bits to see how it works.

Some of your IK boxes are grey - this is because they are not being used on that particular bone, either because it is not part of the chain or it is not connected or some such - I won’t know until I look at your file.

PS. I will look at your file tomorrow - it’s getting late here.

OK I have looked at the file, some points to note:

There were 608 duplicate vertices in your mesh - not good! :no: - select all vertices, then key w and select “Remove Doubles”. These will cause you performance issues.

You have some topology issues to fix - like misshapen parts, insufficient vertices around the curves. These you can work on once you have the rigging correct.

You have some faces that needed “normalising” In Edit Mode - Ctrl-N to fix these, this is generally caused by mirroring faces, which then are no longer “External” to the outside of the object, causing them to appear much darker.

You have no lamp - so it will never render - I have added a sun.

You have no camera - so you cannot do other than render preview.

Your background was black - not good to see things against, particularly with no lighting! You will find a sun and a camera on another level.

With a sub-surf modifier, alway check the “Optimal Display” box, or it can be very difficult to see through the object in wireframe mode. I always put the Armature Modifier AFTER the sub-surf, makes for better animations, others have disagreed with me on this point BTW.

Your IK constraints are all wrong, but as you don’t need them I will not overload you with why. When you do need an IK, let me know and I can help. The flip on the bones was as I thought in my previous post.

But, I have fixed your file for you, you will find the new stuff on two other levels from yours.

Just run the animation (Alt-A) to see it working, then you can take it to bits to see how it works. Move or rotate the “low-couple” bone to operate it yourself, or you can rotate the “top-couple” bone as well.

Have fun, the initial learning curve with Blender can be VERY steep! But we are here to help. :yes:

One final point - you may be better off having each separate part of the assembly as a separate mesh - it makes for much easier vertex assignment in mechanical system. You can separate them out by going to Edit mode, selecting all the vertices associated with a particular bone from the Vertex Groups panel and then keying p - and chose “Selection”, this makes a new mesh of the selected vertices.

Wow, that was my first time I have written in this forum and I’m very impressed with so much professional sugegestion of you.
Thanks a lot

By now I try to add the option into to move the rig not only on one axes but also on all axis
(like in my file).
By reason of the complete new rig I don’t get it in what way I have to parent the bones now.
Does anyone have an idea?
I need the turntable very much 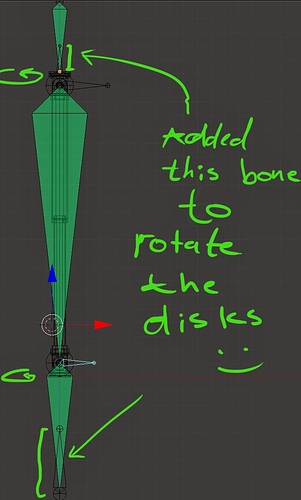 Do you want to rotate the whole rig, or do you want to just rotate the top and bottom disks? Either way I do not think you need any new bones from the ones I put in the rig.

Currently I believe the disks are part of the top and bottom couplings, let me know if you want to alter this as well. It should be possible to just alter the limit rotation constraints that I put in place to stop axial rotations.

Let me know and I will look at it later.

I just looked at the file I posted again - you can rotate the whole rig axially by selecting the top bone in my rig (top-couple) and rotating it about the Global Z axis, by keying R Z and enter a value or use LMB, or its own Y axis by keying R YY and then a value or use the LMB. the YY bit means use the objects own Y axis rather than any global axis, you can use XX or ZZ as well. It will also rotate about it’s own Z axis if you remove the lock in the bone’s transform locks section, but I am not sure why you would want to do this until I see what you are intending to use the model on!

I am creating a robot

I don’t know if my plan is good. Maybe its better to rig the hydraulic without a rig based on bones. I don’t know,
but I hope I describe everything right and you can understand why I need a hydraulic which can I animate no only on
one axis.

I m look forward to your answer

oh yeah really bad tiding, but good to know now. so I can choose another plan

Very cool options you show me. Happy to get help so soon.

I don’t like the look of ball and socket joints so much and in following example (see link below)
it seems that it works also with other joints:

If it’s not possible to rig it with one joint from my old file and one ball and socket joint, I think I would build it up with two cardon-joints like here:

Also I don’t know if it’s better to connect the hydraulic without bones.
Cause I don’t want to move the hydraulic by it self. It only has to follow the chain links from the robot like in my last gif-image. What do you think ?

I don’t like the look of ball and socket joints so much and in following example (see link below)
it seems that it works also with other joints:

If it’s not possible to rig it with one joint from my old file and one ball and socket joint, I think I would build it up with two cardon-joints like here:

Also I don’t know if it’s better to connect the hydraulic without bones.
Cause I don’t want to move the hydraulic by it self. It only has to follow the chain links from the robot like in my last gif-image. What do you think ?

The first option you posted a picture of, has the axial rotation turned closer to 90 degrees to the hydraulic’s line of action, so this would work in real life. The axis of rotation of the “disk” on this picture is never in line with the cylinder as you had it, so this would work, yours would not. You can rig it with an IK constraint instead of using the Stretch-To I showed you, only in the IK panel for the bone set it’s “Stretch” property to 1 so it stretches and follows the target bone.

The second option (animated picture) is a universal joint, I think you called it a “Cardon” joint, as in the tutorial I pointed you to, so this would work also, just clamp the end couple, or its bone, to the head or body as appropriate. See the tutorial link I posted before to see how it is done.

You can rig it either with bones or with empties and Track-To and/or Copy Rotation constraints, me, I prefer bones in this type of rig.

I did not say that you had to animate the cylinder, I was just pointing out how real life works. IK or Inverse Kinematics is so called because you move the arms, to move the cylinder, whereas in real life the Inverse applies, in that the cylinder moves the arms.

Both methods of either bones or constraints are in my “Cylinder-Problems” blend file I posted in a previous post, so you should experiment with these and see how they work.

Might I suggest you do a simple rig (just a simple body, head and two cylinders, then post it here, so I can see where you are at with the techniques? It is too tempting for me to do it for you and you learn nothing!

Finally, note the positioning of the cylinders in your first posted picture. Two cylinders positioned like this on either side of the head and set back from the head joint, will operate your robot’s head correctly, I am not sure you had this exactly right in your model.

Yeahhh! I got it

and I didn’t want to take the easy way. So I didn’t build it up with ball and socket joints.
I take two cardan joints and I m happy with the functionality of it

For me for a long time was hard to understand the technical differences between the two typs of hydraulics.
The last days I worked on the new rig. My head was burning

My topic are more to create visual results.
I don’t know if my current rig is really professional but it works

Now the only thing I would improve is to add a
limit-contraint to the stretch bone.
I m exited about your opinion.

You were a good mentor.
I ll keep you up to date

Back to my topic: Now I will design the hydraulic

Yeahhh! I got it

and I didn’t want to take the easy way. So I didn’t build it up with ball and socket joints.
I take two cardan joints and I m happy with the functionality of it

You are welcome sir!

It looks good now - you should be pleased with your work.

Keep up the good stuff and let me know how this project progresses. You can always start a thread in the “Work In Progress” section of BlenderArtists.org, so we all can see your progress and offer more advice as the project matures.