Problem with array modifiers and curves

Not sure if this is the correct place for this question, or if it is more a modelling question. Usually it should be a pretty easy thing to do, but i ran in some minor problems with this workflow in the past and now i see a behaviour of elements i don´t understand.

Basically it is the same process I use for pipes and stuff like this. And it works if i dont move the curve or the objects from the center of the scene before adding the array and curve modifier.

If I add the modifiers later there is an offset to the elements. If i move the pivot/object after that around, I find the right spot pretty fast and can place everything the way I want. But first it is more eyeballing and not 100% accurate and second I can make it work, but I dont know why and I would like to understand that.

In this exampe it is just placing objects around a curve. The triangles around a half circle just like a child would draw a sun. As i told before it is more about understanding the behaviour, so I moved the curve and the geometry. I can get it to the right place, but only by moving around the geometry and I guess there is a better, more accurate way to do so. 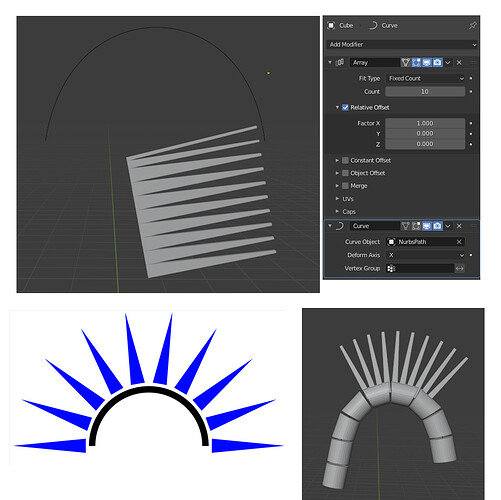 Basically it is the same process I use for pipes and stuff like this. And it works if i dont move the curve or the objects from the center of the scene before adding the array and curve modifier.

The origins of the array object and the curve should stay at the same location. If they do not share the same location it is difficult to get it working in a predictable way. So make sure the share the same origin, if not change the origins so they fit. Then it is easy to tweak the array and curve as desired.
That is the reason the if you move the curve or array before adding them together they didnt have the same origin anymore.
Also it is easier to get an object pointing in the right direction if you enable “Display modifier in edit” mode. So you can see what happens if you want to rotate the triangle in the right direction.

Thanks for the information. I hoped there was another way to solve this problem, when painting a lot of curves into the scene and later placing elements along all of them. So I have to move the object itself and the pivot/origin always into the correct location for all of the curves?

So I have to move the object itself and the pivot/origin always into the correct location for all of the curves?

Yes, but you can use the snap menu (shift + s) to do this fast, use section / cursor to active / cursor.

I got back to the scene and was testing for a few hours and am completely frustrated by now. I thought I basically knew how it would act and even found an in depth tutorial about arrays if someone is interested: https://www.youtube.com/watch?v=MBvT6RiSEj0

The curve and the geometry got the pivot/origin in the same location. All transforms are “zeroed” and I added the modificators like seen in the image and tried every “Deform Axis” Value. This one got the best result and it is still deformed and oriented into the wrong direction.

Can you post your .blendfile, we take a look at it.

Of course.
And thanks for the reply and your time

Hi! All seems to be in order but the curve itself is causing this result:

PS. Of course there still will be some deformation (depending on the curvature) which is normal and expected for curve modifier.
For arrays without deformation see Instances.

You can also use particles:
arrayproblem.blend (3.3 MB)

Thanks alot.
I think i will stay with arrays and curves for now. I still suck using these tools

But good to know, that there are so many different approaches.