Problem with creating a hole that would not affect bad shading

Hello!
I am currently working on Soviet granade. Most of the parts have been done but I still strugle with accomplishing a handle. The problem is with a hole that I am supposed to place in it and I don’t know after several hours how to fix it. Shading is always bad even if everything should be aligned perfectly with round curvature. 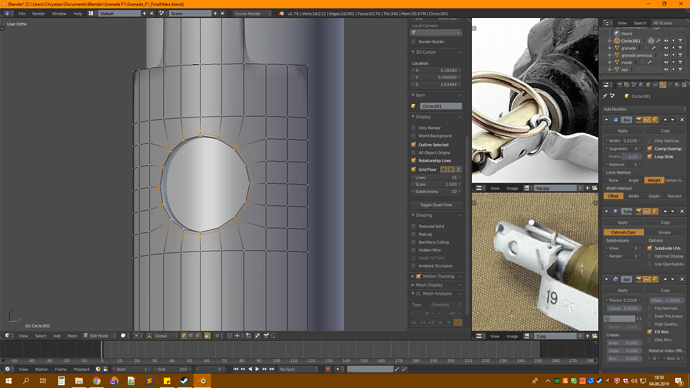 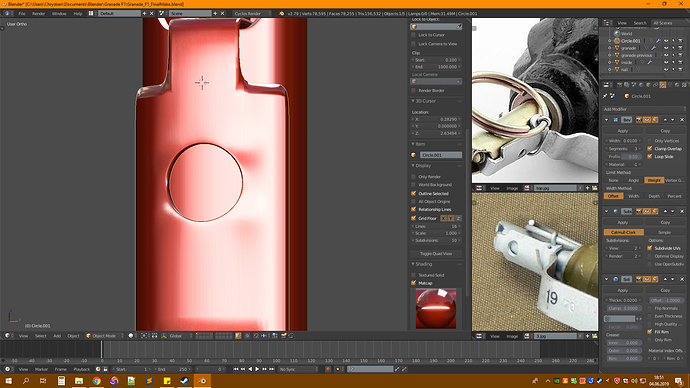 This should help give you an idea. Though I am creating a button here, you could keep it at the point of the hole. 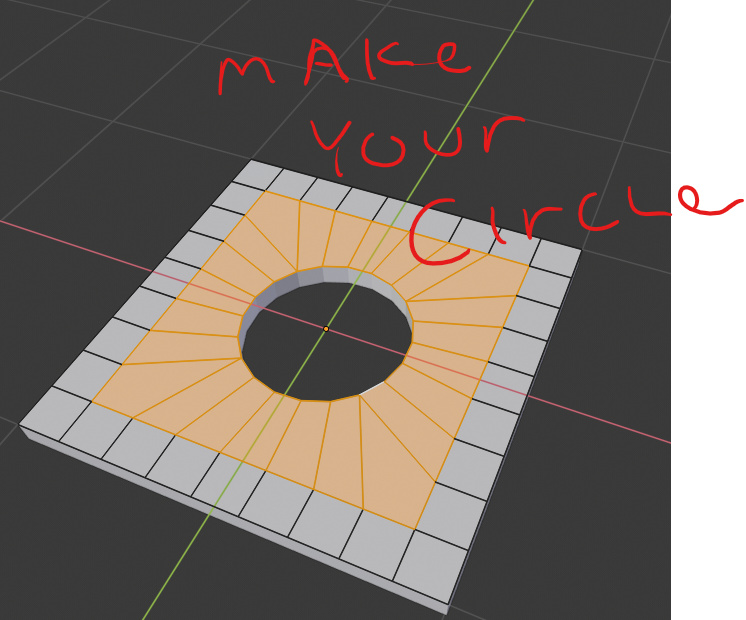 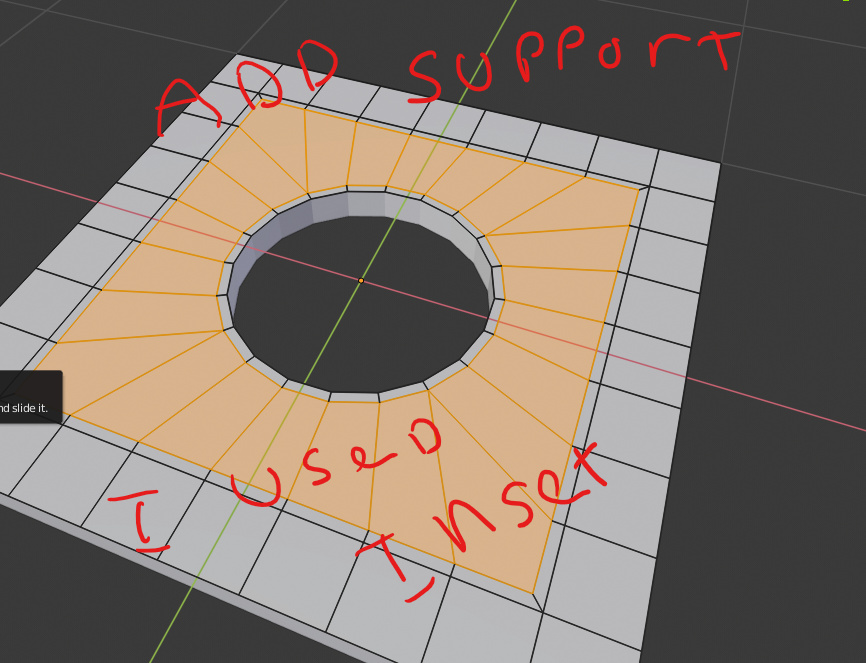 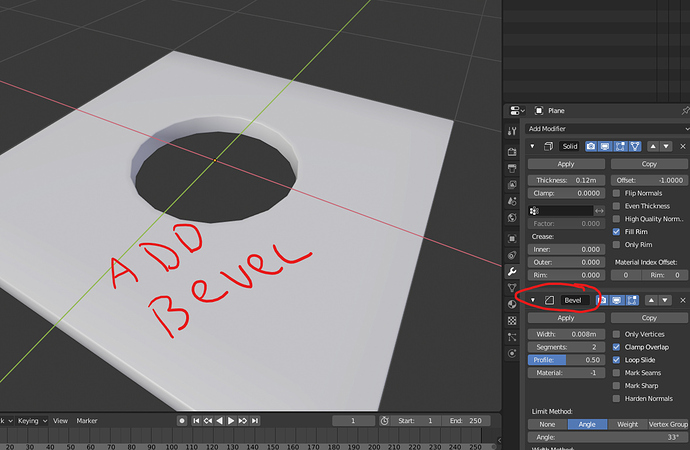 If you need to do this on the quick, supporting edges and bevel can go quite a ways to speeding up your workflow, And inset can do decent in cases like this by selecting all of the faces (or you could select the edge of the circle and extrude in once, but that can be problematic in cases like yours) 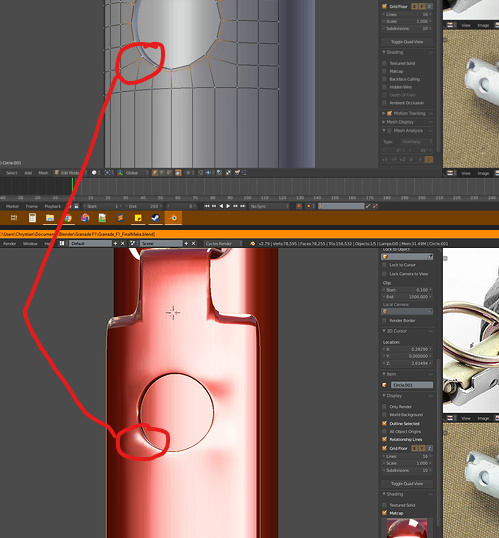 This also avoids poles at your steep angle change of the hole, some engines will respond poorly to that

Actually I did almost everything like he did before posting my problem.

It generates a little more poly that way, but I’ve had the least issues with moving it from one engine to the other. That and I’m lazy.

Do you mean that giving it that extra edge loop support brings problems? If yes then it is strange because you need somehow to define sharper edge for example. If you use bevel modifier then it creates as I know similar situation.

Use the shrink wrap modifier. 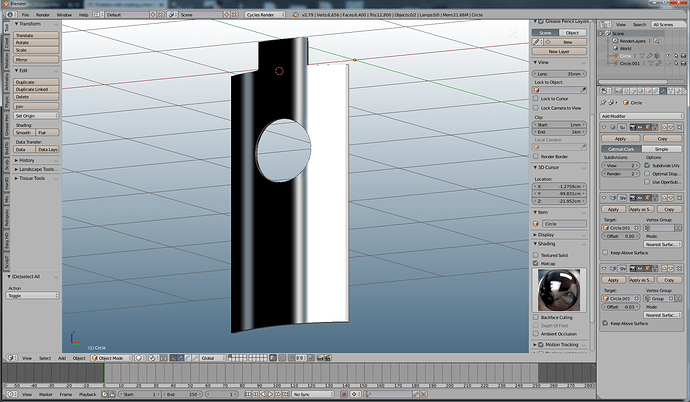 Here is the video https://www.youtube.com/watch?v=6mXRKjfBx8E&feature=youtu.be

Yeah but what if I would like to have model in low poly. I guess then I should use normal map.
Anyway if I used shrinkwrap modifier and then I would like to export this model, the bad shading would still exist because after applying this modifier and not using high poly mesh I will still have shading problems as I know. I don’t know if I wrote it with sense.

I would say the lack of it tends to lead to problems, poles are not good to have near steep angle changes if it can at all be avoided

I think it might help you if you increase the “resolution” of the circle and the curved surface a wee bit. The main issue is where the lines running vertically on the curved surface have to deviate to join to the circular shape’s offset edge loop.

I tend to do it the lazy way even if it means putting up with a triangle or two. I don’t mind them if they don’t have an impact on the shading or subdivision surface too much. Boolean. Clean up and merge vertices. Knife cuts to form perimeter loop. More vertex sliding and merging.

Having a horizontal loop close up to the circle top and bottom means any deviation from the curved surface is limited to a very short distance and much less noticeable. 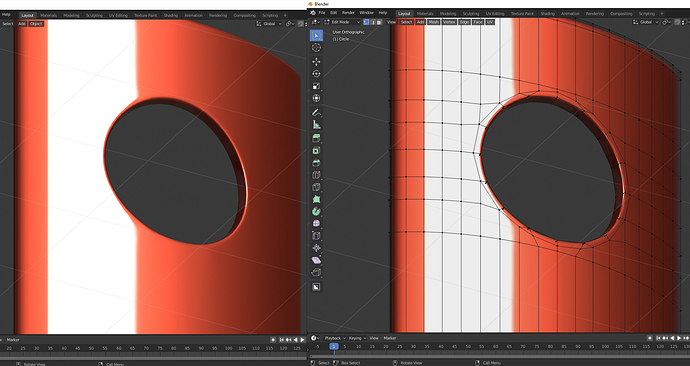 I’ll try it tomorrow. Is this looking decent without subdivision surface modifier applied?

Looks OK. Mine has no Bevel modifier or anything though 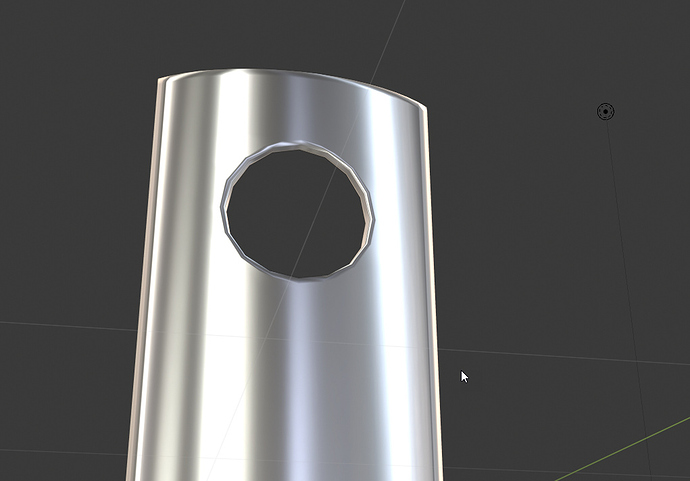 Sorry for really long reply. My processor stopped working so I wasn’t able to do anything in Blender for several weeks.

I tried to do something with your technique but I guess I am dumb and I can not figure out how it works so smoothly in your project. Did you use normal cylinder or maybe you narrowed it?

I would be really grateful if you could record the process of making this hole.
Such a simple thing and it drives me nuts…

I understood what you wrote but it doesn’t work for me or maybe I am missing something. Last time I got bad days so who knows.

I will also attach my part of model for you to judge if it has good amount of geometry for this process.

I am assuming you still have the file from the original post. I think it might simply be that you modifiers are out of order. I think you want Soldify, Bevel, Sub -D

The funniest thing is that I made it again from scratch by using cylinder with 64 faces. Modifiers were deleted during my tries but I left it in this file.

It looks as though you have enough geometry to work with. I took a look at some images of similar grenades on Google and tried from scratch to see how I might approach this as opposed to a generic hole in a curved surface problem. I’ll attach a Blend file which has 12 “stages”. It’s done in 2.8, so load it into that or if you can only use 2.79 Append the objects 1 to 12 and the cutter object. nade.blend (644.8 KB) 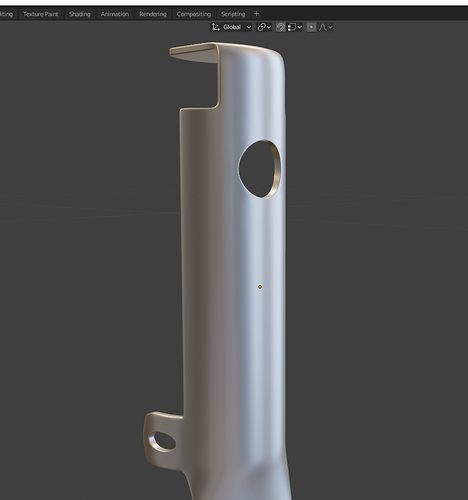 It has flaws, but once textured I think they would be unnoticeable. These things look fairly rough in photographs. They look like thin sheet metal which is stamped, bent and pressed into shape.

Thank you for invested free time in trying to explain me your method. Right now I am reading your post and results you achieved. I’ll give you feedback soon.