Even I have submitted a relevant post in the past, I could not find a solution to my problem so I would be grateful if you can help me a bit…

I have a major problem with curves in Blender:
At image 1 you can see an object (cylinder) in which I have set the pivot point to be the 3d cursor. Then I “shift+s” at the NURBS curve in order to snap it to cursor (selection to cursor). Then I add a curve modifier at the object (cylinder) and everything works fine (image 2). Finally, I apply the modifier and done.

Now let’s suppose that I would like to add another curve at the end of the previous extrusion (image 3). By adding a curve modifier at the cylinder and try binding it with the new NURBS curve, orientation and extrusion problems (image 4) occur.

This is an example of a general problem I have with curves in blender.
Any ideas? 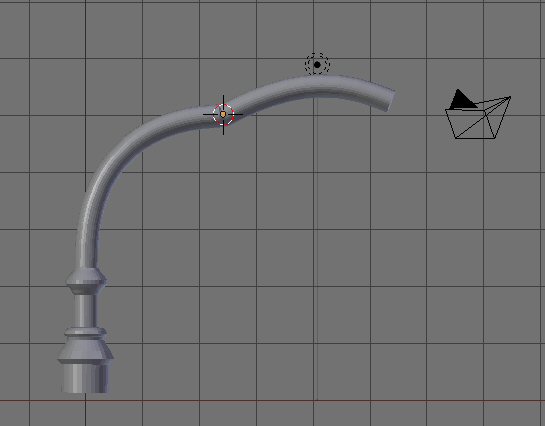 How did you do that? If you try to add a curve modifier at the cylinder then the orientation and the extrusion goes out of place. I am familiar with the way of making the curve a full fill with a custom resolution and bevel point but I am trying to find out what is the problem with the curve modifiers…

He used a vertex group so only the part he wanted to bend got affected.

He used a vertex group so only the part he wanted to bend got affected.

If you use a modifier you need to understand how it works and what its settings mean as well as the exact effect you are looking to achieve. You can then choose the appropriate tool for the job and how you would use that tool.
Wiki entry for curve modifier. http://wiki.blender.org/index.php/Doc:2.6/Manual/Modifiers/Deform/Curve
As Ben_Lind said, you can control what part of the object is affected by the modifier by using vertex groups/weights. You also need to position the object origin to the same location as the new curve.

I got it, the result is good but not perfect… It is weird that at a normal-initial stage of an object everything works fine and then there are problems