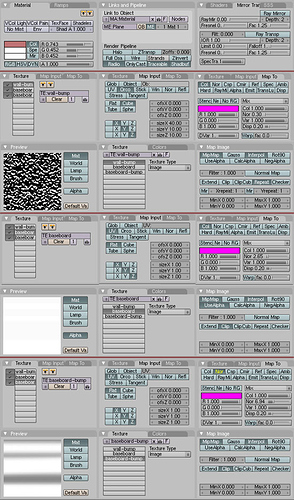 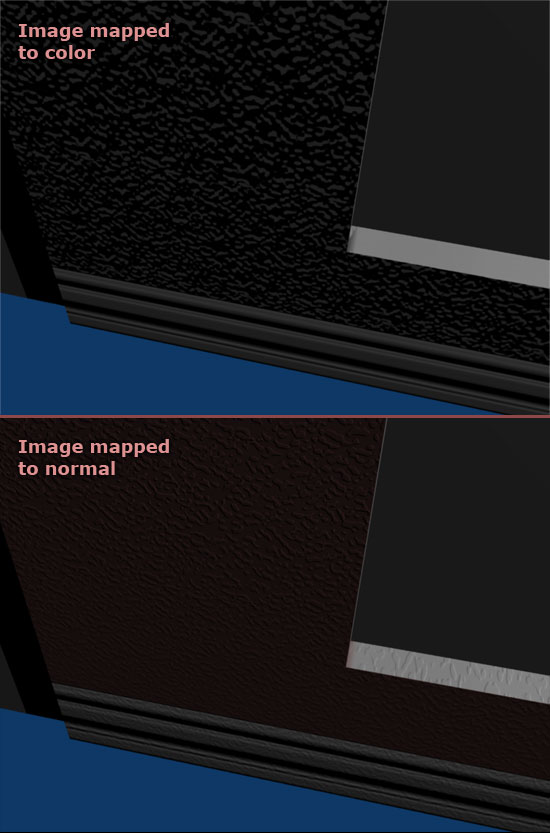 I don’t uderstand the problem exactly (sorry my English) but why do you on the second picture press layout image as Orco not UV?

i think the channels are applied in order; the sequence/order of the channels is important. If you apply a bump first, it will bump the base material color. If you instead color it first and bump second, the bump will be applied to the base material and the first color channel’s results. This is assuming you use a mix mode, and not the stencil mode. see http://wiki.blender.org/index.php/Manual/Map_To

I tried putting the wall bump texture at the top (first) channel and also at the bottom (last channel), and both had the same results. Just now I even tried putting a new texture channel for the wall color right before the wall bump map, and that didn’t change anything.

I tried using stenciling in many different ways, such as using the UV mapped baseboard color as a stencil for the following baseboard-bump, fully black and fully white, and both of those had no different effect. I tried switching it and having the baseboard color be a stencil for the following wall bump map, and that made the wall bumps only appear on the baseboard and not the wall, even trying both black and white images as a stencil.

Anyone else? I’d really like to get this problem figured out if someone knows what I’m talking about. Maybe you could experiment and try to layer bump maps and get it to work (I’ve googled that phrase and can’t seem to find anything!).

To sum up my problem, I’ve got a plane that I’m trying to have: