I’m trying to render a relatively simple animation of water coming out of pipes, but I can’t get the ray-traced transparency to work. In case it had something to do with the interaction of the fluid and the transparency, I tried deleting the fluid part and just putting the texture on a sphere, but it still gives the same weird result.

I have Ray Tracing on in the Render settings, but when I choose “Transparency” from the Alpha dropdown I get this: 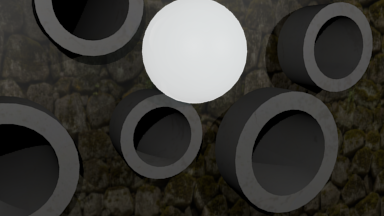 (It may not be obvious from the way it looks here, but the sphere is transparent, not as in it’s showing the wall behind it, which is what should be happening, but as in that entire part of the image is transparent and showing the background color of the web page.)

And when I choose “Sky” I get something different but still wrong – apparently as a new user I can only include one image in a post, so I can’t include the image directly here, but I’ve put the image online at http://alunclewe.com/misc/PipesRender2.png

Apparently it just applies the transparency or sky to that part of the image, not showing what’s behind the water. What I want to happen, of course, is for the sphere to be transparent and refractive and show a distorted version of the wall behind it, but that’s not what’s happening.

Since I’m a new user, I can’t upload the .blend file as an attachment, but I’ve put it online:

Using Cycles is not an option for this project… I need to render the entire 9000-frame animation, and Cycles renders slowly enough on my computer that it would take an absolutely unacceptable amount of time. If there’s really no way to get this working with the Blender Internal render, I’ll have to use z-transparency and live with the lack of refraction (the final thing is going to be small enough that may not be obvious anyway), but I’m hoping I’m just overlooking something simple…

Thanks in advance for any advice!

I haven’t touched Blender Internal in a long time, but I think I was able to whip up something.
BIRefract.blend (508.5 KB)

I fiddled with it a bit to see if I could replicate what you had and is seems that you have:
Material > options > Sky checked.
This will replace any transparency you have with whatever you have set in:
Render > Shading > Alpha

Thanks, but no, that’s not it; I did not have that option checked. I included a link to my .blend file (again, as a new user I wasn’t able to upload it to the forum directly) so you can open the file yourself and see exactly what I did. It’s entirely possible it is a very simple error and I just had one option checked that I shouldn’t have, but it’s not that one.

I changed these values in your material to get refraction working again: 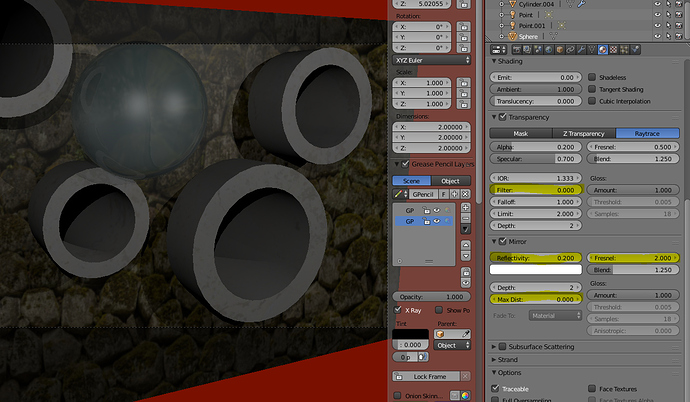 The biggest issue was too much reflectivity without any fresnel, also the filter value washed out the refraction effect, and the max dist on the mirror turned the entire object into the sky color.

It’s been the better part of a decade since I touched Blender Internal. And boy, I would super recommend trying either cycles or the new Eevee engine. It took tweaking a bunch of knobs to even figure out what went wrong here.

Ah, that seems to have done it! Thanks so much!

Yeah, I’ve certainly heard about how much better Cycles is, but unfortunately the issue, as I mentioned, is the speed… rendering with Cycles takes so much longer on my computer than Blender Internal that until either I get a faster computer or I can afford to make regular use of render farms, it’s not really feasible. The Eevee engine, though, from what little I’ve read about it, looks like it could work out… it’s going to be a bit of a learning curve, since I’m now used to Blender Internal, but it could be worth it in the long run.

Anyway, thanks again for the help! Much appreciated.