How do you tell which version you have?

EDIT: Here’s another screenshot of a synaptic package error: 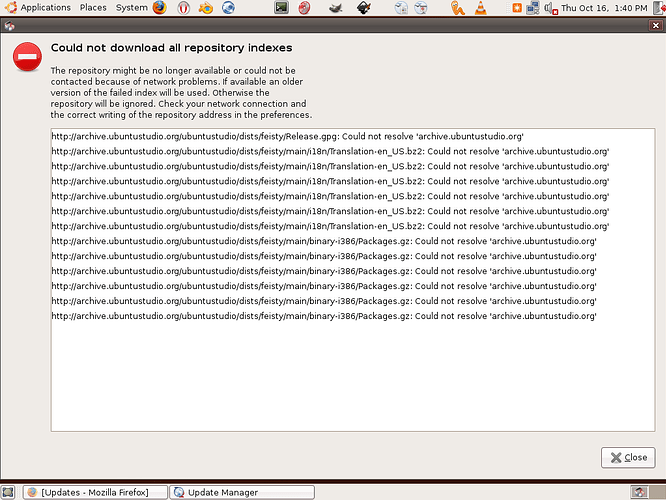 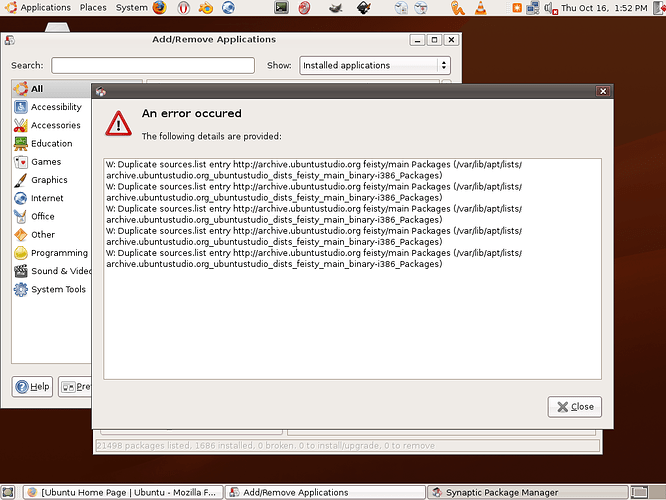 You know the latest is BETA of Ubuntu 8.10! You’re 2 years behind believe it or not. :eek:

You know the latest is BETA of Ubuntu 8.10! You’re 2 years behind believe it or not. :eek:

EDIT: It looks like a problem with Ubuntu Studio.

Is there any way to unistall ubuntu studio?

I installed ubuntu from a disc and downloaded ubuntu studio stuff. Maybe I just need to disable the ubuntu studio repositories, because it looks like they’re defunct.

cat /etc/issue
it will tell you which version you have

Run it will tell you which version you have

Other possibles are
and

Well now I know how to figure out what version I have. Thanks.

But I’m still wondering what those errors are about.

One down, one to go…

Did you check your sources.list to see if you have incompatible repositories enabled?
Ubuntu-studio is a distro in its own right, so if you have ubuntu-studio and ubuntu, I guess it can’t upgrade you to both.

Which install do you have anyway?

Here we go, this could be the problem here:-

ATTENTION: These Instructions are now out of date, and do not work. They Have been left here for Archival Purposes. Please usethis guide
https://help.ubuntu.com/community/UbuntuStudio/UpgradingFromFeisty

I think archive.ubuntustudio is indeed no longer available.

Did you check your sources.list to see if you have incompatible repositories enabled?

Not yet, good idea. That’s probably the case, since I probably enabled the ubuntu-studio repositories.

Which install do you have anyway?

I installed an Ubuntu 6.06LTS live cd, and then downloaded the Ubuntu-Studio stuff later on.

I’ll check it out later.

Seems like it would be easier for you to just do a fresh install and I highly recommend the new Beta. It has some very useful new features. If that is not an option then yes I think it is ubuntustudio that is causing the problem and I have no experience in it so I wouldn’t be much help.