I have some problems using 3d curves with a “bevel object”
Look at the screenshot on the bottom you see the shape. On the upper right win you can see the shape following the curve which works great when the curve is straight. On the upper left you could see the problem the curve get much thinner depending on the angle of the curve. As if the bevel shape would be projected in a rotate pos like the angle.
Switching to 2d curve will work but i need a 3d curve. What can i do to fix this? 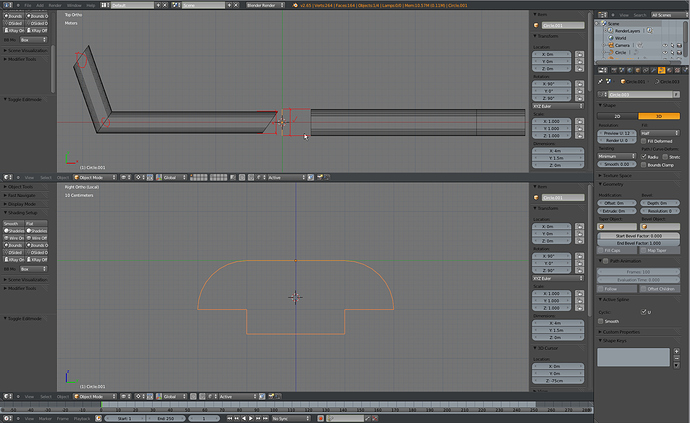 I’m asking the same question about how to preserve the thickness of a extruded curve. I’m using a bezier curve in vector mode. 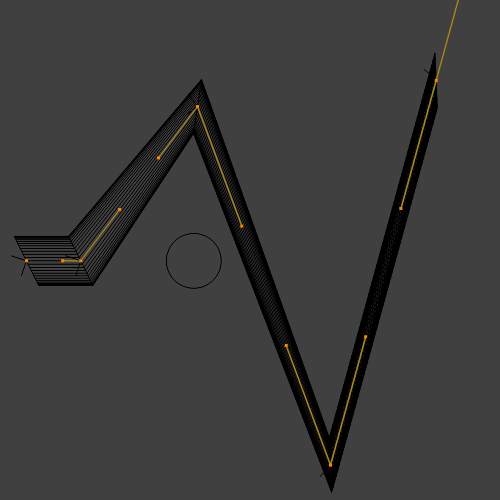 This is how it should look, here in c4d : 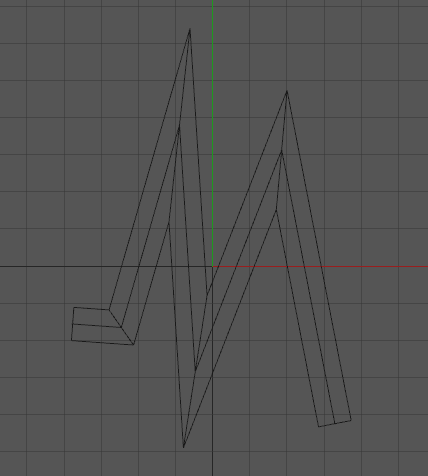 no solution for that, anyone?
Hey devs is this a bug or intentional?

Try to use Ctrl+A menu in object mode and adjust rotation and scale,worked for me.

I repeat my yesterday’s request:

I think this is a bug. Specially if you need vector- or free handles for sharp corners, the original bevel profile turns correct, but the “profile diameter” is unchanged. This destroys the corner area and makes this tool quite unusable in those cases. If i could, i would do the bug report. But i can´t. So please do it for me.
(If i remember correct, this tool is operated properly in some earlier version, maybe in 2.49b)

Hi… @dave62: I can’t say for Blender per se, but it seems to me that the real problem is in the the geometry. It’s a common problem for those who work in wood to make sharp bends in, for instance, a picture frame. The problem is that if you start with a “bevel” (i.e. a “cross=section” in woodworking terms), the shape of the bevel at the joint of the two curves is not the same as the shape along a straight section. In this case you seem to have compounded the problem by starting the bevel out at an angle to the curve (and I have no idea how you did that).

@dalex: You made it even “worse” (compared to your desired result) by having very acute angles, which magnify the distortion. In addition you seem to have added some taper to your curve, since a simple bevel could not reduce the width of the extrusion along a straight path.

Two possible solutions suggest themselves. 1) divide your curve into sections and bevel each section. 2) Don’t make such sharp bends (depends on you desire of course: if you are trying to make a picture frame, well you need the sharp angles.

Just a few thoughts from a Blender noob.

Well, anyway it`s unusable behavior, if you will make sharp-angled shapes with the curve-bevel system.
Only way i know to correct this, is convert the shape to mesh and correct the corner area by hand. It´s very laborious. Maybe devs could help, when they knows this problem.

Well, anyway it`s unusable behavior, if you will make sharp-angled shapes with the curve-bevel system.
Only way i know to correct this, is convert the shape to mesh and correct the corner area by hand. It´s very laborious. Maybe devs could help, when they knows this problem.

yes, i will write an email to Mr. Barton about this. Lets see…

quote:"
Hi, this does look odd, this is done this way to prevent
self-intersections with short segments at the end.

This could be made to use flat capping as you suggest but for short
edges when it would self-intersect, use the current method.
But nobody is really active working in this area at the moment. :S

So sorry this is a bit annoying feature, but its at least working as
intended at the moment.

Maybe we could start some funding to collect money to work that out.

Now we know. It´s not forthcoming quick help with a problem.
Thank you, however, when you reported the matter.