Please release a tutorial. Your cloud tool is amazing! Should be implemented as core function.
Cheers.

I was planning on making a tutorial with the next version. Now with the amazing feedback I am getting, I definitely will.
I’ll probably wait at least for the beta though, there are still a lot of bugs that are preventing me from progress.

this is amazing! were you at all inspired/influenced by the horizon zero dawn clouds? They presented them in detail which is handy http://killzone.dl.playstation.net/killzone/horizonzerodawn/presentations/Siggraph15_Schneider_Real-Time_Volumetric_Cloudscapes_of_Horizon_Zero_Dawn.pdf

Wow, thanks for the link! I’m not proud to admit it… but I did’t look at much reference at all.
I saw a graphics demo of horizon and that might have inspired me, I don’t know, was long ago…
But this might be useful for future updates, skimmed it, good stuff

no problem! I have to admit I had fantasized about trying to set something similar up in blender and just never got around to it. I hope its useful! (then I can play with it haha)

hi, personally my only problem is that I can not render JPEG AVI

Please keep in mind that Blender 2.8 is still in its alpha state. Some things might not work as intended or not at all for a while. The file format has nothing to do with the shader itself though…

Hi there again. I’ve been doing some tests freezing the clouds by setting the time mod to -10000. The results are good, but I’m seeing an issue (it’s probably an evee thing). Here is one of the tests. It almost looks phenomenal, but I see a noticeable flicker in the shadow of the clouds:

I’ve tried setting the shadow samples up to 128 as well, which seems to reduce flicker, but it also reduced the contrast of the shadows to light areas, which I like so much. Any ideas?

How are you getting the clouds to render in EEVEE? Whenever I try to plug any texture into the Density, the volumetric effect disappears altogether.
(I’m currently using the recent Beta release).

You made wonderful tool
thank you very much.

Is it possible render it with eevee with transparent bg.?

or is there any way workaround?

I don’t think it’s possible to render volumetrics with transparency in Eevee right now, it might be in the future though.
The only workaround I can think of is rendering the clouds with a black/green background and keying out the alpha. But that is kind of poor…

You can try this:

yogyog writes: Rendering Smoke, Bloom or Volumetric Lighting with an alpha layer in Eevee is not straight forward – but it’s not that hard either. These little tutorials assume you’ve already have your scene set up, and are now hunting for that...

haha yes
i just wanted to past smth for newbies as me, that one way to add alpha is in compositing with luminance node
seems that its better to do it in blender then in after effect 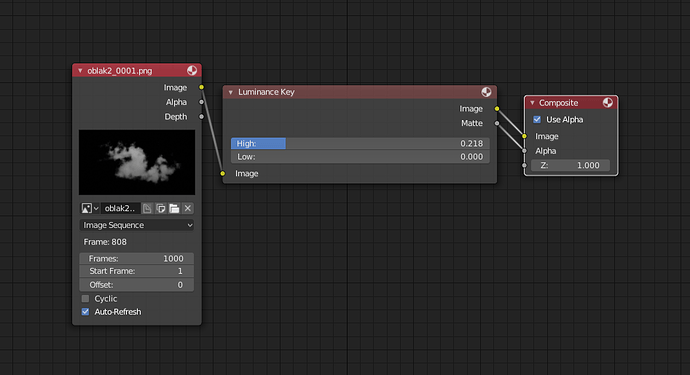 I have look at it, but the problem is probably that bounding box for volume is solid mesh, which is not transparent in Workbench renderer which should deliver alpha.(

how to use in eevee?
i want skydome like unreal engine.

I haven’t been to these forums in ages. Everything looks different! I logged in to post some procedural clouds I made this morning for fun, when lo and behold this thread popped up under the “similar topics” suggestion. Crazy.
Our setups are very similar Pixelshatter, must be parallel thinking!

Here’s how mine turned out. I’ve read the horizon zero dawn paper before and was very curious to try their modeling methods, which translate to blender nicely.
I find clouds very fascinating somehow and have always tried to create them in blender, but always leave disappointed. I think procedural generation can sometimes produce results that are repetitive if you’re not careful, plus the shading for clouds can be a bit tricky.
Hopefully the new Principled Volume shader will help take some of that weight off

Edit for anyone wanting the file: I have posted it at the bottom of the thread, it is old and doesn’t work perfectly in the newer eevee, but feel free to play around with it an update it if you want

Someone told me about the horizon zero dawn paper. Haven’t reworked my shader with that yet but it seems to be a gold mine

This doesn’t work with latest builds from march 2019. Results is empty image. Both in preview and render view.

Looks like it’s OSX issue. On windows it works ok.