trying something new after publishing my Shortfilm ‘Sally’ 7 years ago, which since then gathered over 11 million views and turned to one of the most watched Blender shortfilms ever. Even some cool people from Tokyo made an official japanese Version of it.
Unfortunately the viewcount stucks since it has been age restricted lol.
Surpassing even each single Blender Institute short viewvise, which I admire and of course love every single one of. Those Blender Institute films were and will allways be inspiration for me.
I am though very thankful and never thought of coming that far.

I took my leading Character Sally and made a new Rig and did other Stuff like updating the mesh Hair, trying to incorporate fixable elbows and bendy limbs and more stuff.
The Idea behind it was to make it configurable: That means I can switch Hairdo, Skin/Eye/Hair Color, add freckles and other details on the fly. In other words: I have the possibility to randomise a character via Custom Property controllers for more flexibility. That Came out very handy.

Besides I wanted to test some other apps and wanted to see if I myself could make an Endproduct like I imagined it. I never had the pleasure working with those Apps but I feel satisfied with the result. Besides loving and living Blender I tested Marvelous Designer, Substance Painter and Davinci Resolve which are a great addition for anyone who wants to do something like this, like most of you already know.

Finally I made a short Animation based on a dialogue from a 1999 Angelina Jolie Flick.

In it I tested the versatility of the new Rig and tackled this Scene with 3 different Styles made from one Rig/Character.

Then I split the lighting up in two themes:

Thanks for watching folks 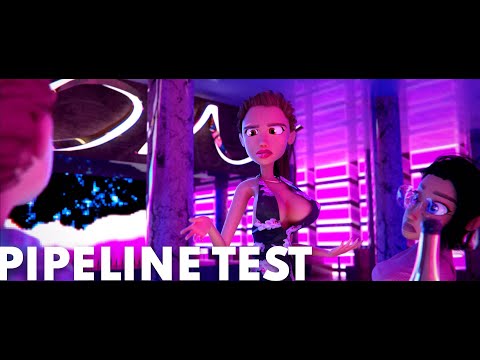 This is some incredible work! Great job.

I watched “Sally” once and I did not know that it was your own.

If you have a blog or discord channel I would be interested to have a look about production tips and tricks. I have been researching this part for the last year or so and still trying to find cutting-edge techniques.

Now I am really interested to find a proper way to manage character rigs, in a more modular and reconfigurable fashion.

See some thoughts on this here:

Animators and others: What eats up your time? Blender and CG Discussions

My greatest nightmare on animation is that I don’t know which rig I need. All rigs are important according the scenario. Sometimes I need a straight and fast FK rig, other times I need IK. At some point I ended up using a double rig. Which was originally FK but at some point it would be controlled by a master IK. Also working in FK most of the times is really handy since Blender’s auto-IK does the job pretty well. However the result is only controlled by user input. It would better to be co…