The LinkLib 1.13!
With simulated “Instance properties”.
Easier access to the Pivot and Base via Instance class.

As an side effect of the MouseOrbiter the former Group Scripts were renamed to LinkLib and can now be used as Python modules.

[Edit] Added three VideoTutorials at the end of this post [/edit]

There are some Python-Module-Controller-ready functions in the module: 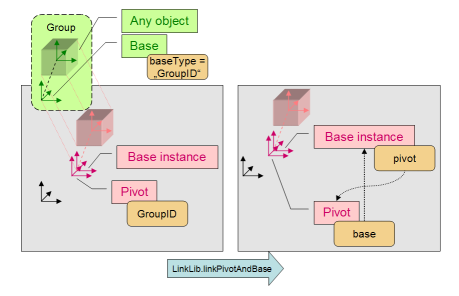 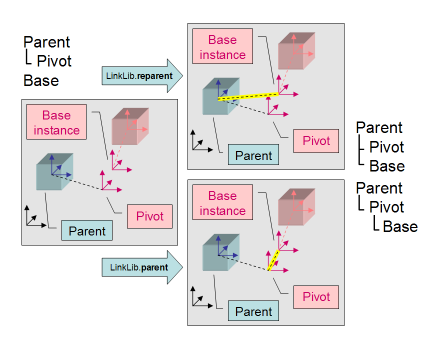 Part I - Basics and parent to pivot
showing

(no sounds but with English subtitles)

Part III - Link from and to .blendfiles
showing:

Monster,
Could you make a tarball or a zip of the scripts as pure .py files with some indication as to how to layout a directory structure such that they can be used as independent modules? (IOW, without having to Add them into a blend file.)

Thanks for this very cool script. IMHO the Game Engine is suffering a disconnect with the way ‘normal’ Blender handles dupligroups and your script is the only way around it as of 2.49b.

Damn, I just saw that my .blend files are not attached. I will upload the this evening when I’m at home.

Ok, the demo files are attached.

I have my own version of a solution to the problem. I started a new thread here:
http://blenderartists.org/forum/showthread.php?p=1505248#post1505248

Thanks for the help and ideas, Monster.

Thanks, Monster. Your stuff is pretty advanced. Maybe I’ll learn something.

The files are attached to the first post. The scripts are inside the .blend files

(also the relationship with the MouseOrbiter isnt clear to me, btw, why its called MOUSEorbiter, when objects should orbit… me confuse a bit)

The mouseOrbiter is just an example and demonstrate the usage of LinkLib. It is called MouseOrbiter because if you move the MOUSE - the ORBITER and all its children circles around a center. E.g. you move the mouse left, the orbiter moves left on the orbit.

If you use addObject or Groups you might have discovered that the object (pivot) that adds the object (instance) has no further relationship to the added object.
Especially the objects of a group are not accessable in the Editor anymore. So you can’t parent anything to them or parent them to some other object.

That means if you move the pivot the objects of the instance do not move. (Keep in mind that instances can consists og more than one object.)

To solve this problem the LinkLib provides function for it (see the first post). So you can

but cant you just use the Parent function?
like said object A.setParent(B)?
And for Groups just “for” loop them with setParent()?

Greets Equal, thanks for explanation.

The problem with group instances is: there can be more than one.
The questions are:

For a little help I added a video tutorial to the first post.

Two new videos were added to the top post.

I hope you enjoy
Monster