Hello everyone. I am a C++/C# programmer, and I am looking to expand my development team. My project is called BubbleMan: Journey Through the Stars.

The Idea Behind It All
Growing up, I remember being able to sit down and play video games for hours. I remember playing a game through, falling in love with the storyline, and I can still remember them today. The reason isn’t because video games were a lot better back them, because the graphics left much to be desired, but because they only had their story telling, and great game play to fall back on to make a game memorable. It is my opinion that in the modern days of video game development, most games are lacking great story telling techniques, and have decent game play at best. This is because their main focus is all about pleasant graphics. So I though, why not try to make a game that has both amazing story telling, great game play, and still has amazing graphics? I want to create a project that can be simplistic enough to target a younger audience, and yet be fun enough that older generations of gamers would enjoy playing it as well. Yeah, it is easier said than done, but that is where the idea of BubbleMan: Journey Through the Stars came from.

Story Overview
Everything seems normal within the Central Galaxy, especially on the little planet Bubble Aris; the home to a proud race of bubble people known as Bubble Men. A young bubble man plays around outside at night. Looking up, a meteor lights up the night sky in the distance. The little bubble man begins to investigate when he notices several more flashes of light. Panicked, he rushes back to his village to find everyone else in the same state of shock; in fear of the meteor shower’s destruction on their little planet.

Our little hero sets forth on his journey as he travels through space to other planets within the Central Galaxy, taking on challenging puzzles in order to collect ancient artifacts. What he didn’t know is how deeply rooted his footprints are engraved into destiny as he finds himself traveling between the past, present, and the future in hopes of restoring the barrier around his planet before time runs out… 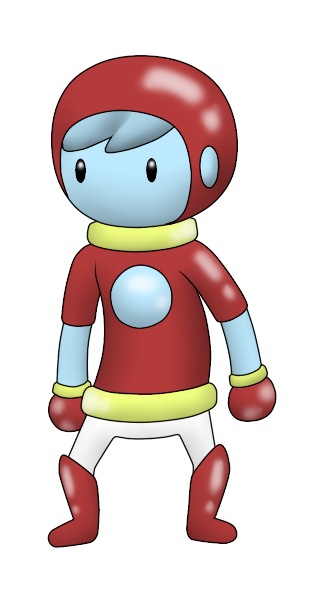 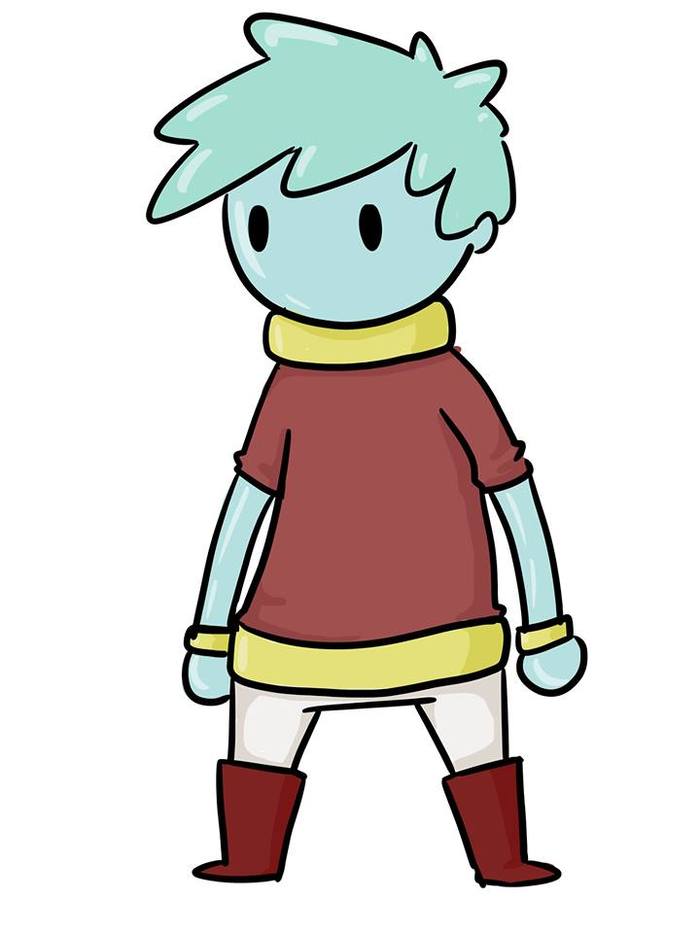 Game Mechanics
Artifacts – Although artifacts are a key point in the plotline, they also serve a purpose in the overall gameplay. Each artifact has its own special ability that can have a broad effect on the game play, ranging from unlocking new paths in dungeons, enhancing weapon abilities, or and triggering special events.

Dungeons – The dungeon system is a vital part of the world development, and the game play factor. There will be at least two to three dungeons on each planet, all of which have events related to the collection of artifacts, and the access to certain dungeons will require having obtained certain artifacts that can clear the pathway. When a player enters a dungeon they will be taken to a dungeon “path” or grid, which guides them though each level of the dungeon. Something similar to what can be found in the original Donkey Kong Country as an example. The background and grid design of each dungeon will correspond to the location, and theme of each dungeons.

As the player progresses through each level in a dungeon, they unlock more of the grid and new levels to explore. Most of the levels will be done in a 2.5D camera style. Some areas in the dungeons are trigger points for events, whether they are plotline points, or artifact related. These areas will use a 3D camera style instead of a 2D camera style like the rest of the dungeon.

This is just some of the gameplay mechanics. More of the game mechanics, as well as a full structural break down of the plotline is documented in detail. Anyone who would like to review the document is more than welcome, and needs just to ask; however, a nondisclosure agreement will be required prior to reviewing the document.

At this current time, the development consists of six trained developers total: three programmers, one audio developer, one animation designer, and one concept artists. I would like to add at least three 3D rendering artists, one more programmer, two level designers, and two more concept artist/2D designer. That means three people working on 3D rendering and programming, one person working on animation, one person working on audio, and three people working on concept work.

Concept Artist / 2D Designers
I am looking for several highly skilled concept art to help focus on character design and level/mapping design. The concept work can be done either digitally or hand drawn. The graphic style of the game is rather cartoon like, so those with a history of drawing cartoon style images is preferred. You may be asked to show some of your design work.

3D Designers
I am looking for several skilled 3D modeling artists, each specializing in something specific: One artist to focus on character/npc modeling, and one artists to focus scenery objects (such as plants, bridges, housing, etc), and one modeling artists who can work along side the level design to produce side scroll platformer levels. All 3D designers will be asked to work closely with the animator, and the concept artists.

Software options
Maya LT - I am willing to pay for Maya LT on a month by month basis, with the license keep in Shining Ashes’s name, for anyone who would prefer to use Maya.

Blender - If an artist is more accustomed to blender, they are more than welcome to use it.

Personal Software - Any artist is welcome to use their own render software as long as their license if approved for commercial use. Further discussion can be had about purchasing a commercial license for said software of choice.

Level Designers/Prototyping
I am looking for several trained level designers. The level designer will be taking mapping concepts and assembling within the Unity game engine. The designer will require a measure of creativity, as they will be asked to prototype any areas that are not predefined by concept art. The designer will doing level design in both 3D mapping space, such as planet surfaced, and be prototying 3D platformer dungeons. Any history with the following assets is a plus:

Profit
Ideally, everyone will get paid once the project is finished. All profits at that point will be distributed equally between each member in the development team unless a certain percentage is negotiated prior to collaboration. However, I cannot guarantee that this project will turn a profit, so be advised that any work done may just end up as a good resume material.

Other Comments
I am looking for hard working, and professional developers who are interested in making a commercial scale game. All developers will be required to apply as a Nintendo indie developer for Nintendo of America (https://wiiu-developers.nintendo.com). Any prior experience with a Unity development environment is valued, but is not required. Anyone interested must be ok with the game being released under my company name, Shining Ashes, but everyone will receive their due credit. All services are on a project basis, but after the game is finished you may be asked to stay on as part the company. All applicants must be a resident of the United states. All applicants must be legally eligible to work within the United States.

The intial postis to long, so I have to add and update information here.

If you are a 3D modeling artists, here is some more information about what software is being used for the project.

Software options
Maya LT - I am willing to pay for Maya LT on a month by month basis, with the license keep in Shining Ashes’s name, for anyone who would prefer to use Maya.

Blender - If an artist is more accustomed to blender, they are more than welcome to use it.

Personal Software - Any artist is welcome to use their own render software as long as their license if approved for commercial use. Further discussion can be had about purchasing a commercial license for said software of choice.

Whoa! this looks awesome! Im a modeler, and id LOVE to try and do something for you guys! Im still working on a portfolio, but I could DEFINITELY model some assets for you (I use Blender). Ill send you a PM with my email. Let me know!

I would love opening welcome Platyperson to the development team! He contacted me a while back, and since then we have mad a lot of progress in the game. I am hoping to be able to assemble a new prototype video here soon to show progress updates!

I also wanted to let everyone know that we are still looking to expand our entire development team. This is a profit share project, but we are looking at having a maximum of 10 developers on the team: 3 modelers (each with different modeling focuses), 2 programmers (One to focus basic scripting and mechanics, one to focus on graphic and effect programming such as Shaders), 1 audio developer, 2 animation design (one focuses on basic animation, one focuses on cinematic) and 2 concept artists (one artist focusing on level/scenery design, one artist focusing on character/npc concepts)

If you are interested regarding ANY of the positions, not just 3D rendering potions, please feel free to contact me at [email protected]

A lot has changed since the video posted above, so I figured it was time to post a more recent video. Below is still a game play video, but it can still be classified as a prototype.

We are still looking to expand our team! At this time there is only one 3D modeler on the team who’s main focus is modeling scenery object. We are still looking for a 3D modeler who can focus on humanoid NPC’s and monster creatures. If you are interested in the project, please feel free to contact me at [email protected].

Procedural Level/Dungeon designer needed! The game is no longer going to have a 2.5D platformer element, and will instead have a procedural dungeon crawler element. For more information on the over all project, PLEASE read the first two posts. Project is still a small team profit share project! Experience with Unity and the DunGen asset is preferred, but are not required. The complete ProCore Bundle, including Pro Builder is also an available at the designers disposal.