a couple of people and myself have begun work on a short movie project, we’re calling it “project olive” as an homage to the peach/orange projects, plus it takes place in world war one (get it? olive drab? …no? ah forget it.)

the discussion forum is here: http://www.blendering.com/index.php?option=com_fireboard&Itemid=67&func=view&id=134&catid=3 but be wary, i’m having hellacious problems with the forum itself, everyone keeps getting internal server errors whenever they reply to a post.

the character designs are going to be modeled in the style of “happily n’ever after” and the new star wars flick, sort of the “sculpted/carved from wood” look.

i started working on the first character we’ve sketched out so far, his name is “jonesy.” 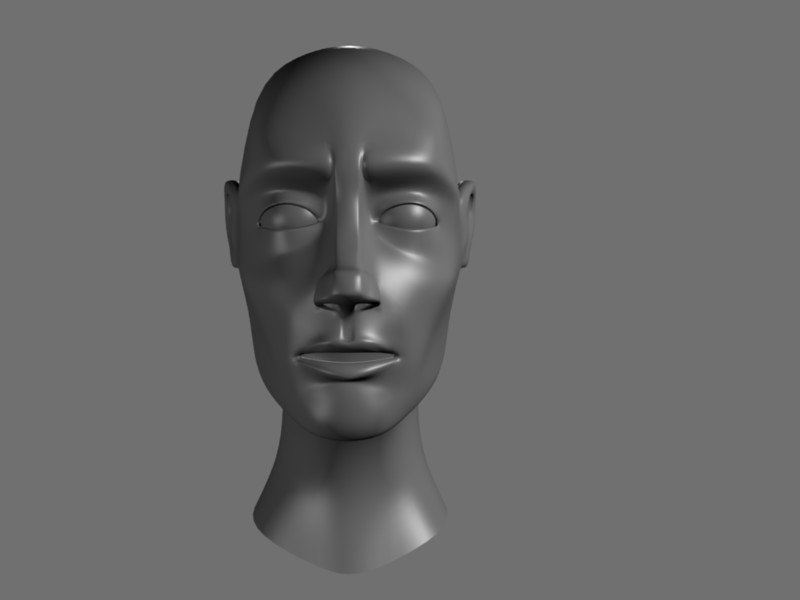 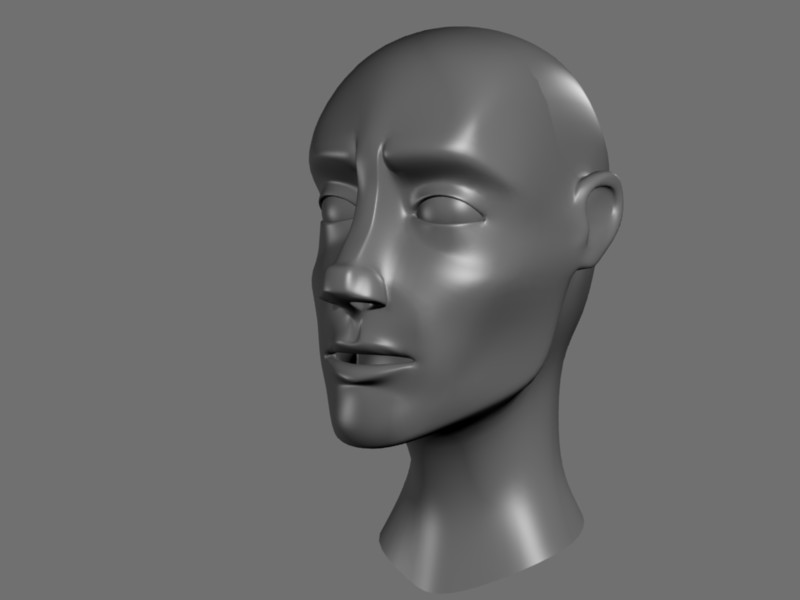 That heads looks great! And if you have any props you want modeled I should be able to do them! Can’t wait to see where you go with this guy!

Looks pretty good, except for the seam on his head. WWI, eh? You’ve got my full support. My BWC entry is only the start of something much bigger, and its cool to see someone else bring Blender to that time-era.

Dave, I’m glad you got this up. I didn’t get that other character sketch up but he’ll definetly go up tomorrow. I’ll start looking at body type designs for the tank as I have several books plus the internet and some model kits… with all that surely we can at least get a good start going on the direction. I’m kind of thinking Metal Slug or Bonaparte from Tank Police… we’ll see though…

Looks pretty good, except for the seam on his head…

seam? what seam? if you’re talking about the 3/4 view over the ear area, well, that’s just the shading. from what i remember working on it, it should be a pretty clean mesh.
mantis, HERE’sa real tank you might look at, then maybe take some ideas from the two you mentioned and combine all three together. but definitely sketch it out before you start modeling :eyebrowlift2:

Good model so far…his you could cut steel with his jawline! lol
the nose is a big blocky…unless you like that style

@lilgrudgeboy: the link works okay for me… and yeah, the blockyness is what i’m going for here.

spent a long time trying to get his hair to look the way i wanted by just sculpting a mesh, and couldn’t get it to look right. so i finally just went ahead and used the particle hair, and set the “clump” up to the max, so the hair sort of has the carved look too.

everything right now (except the hair, which has a “blend” mapped to it, and the eyes) has just a procedural texture; i’ll be creating a texture for the face after i’ve finished modeling the rest of the body. i’ll probably go ahead and give the goggles a leathery texture and a bit of worn metallic look to the metal part. 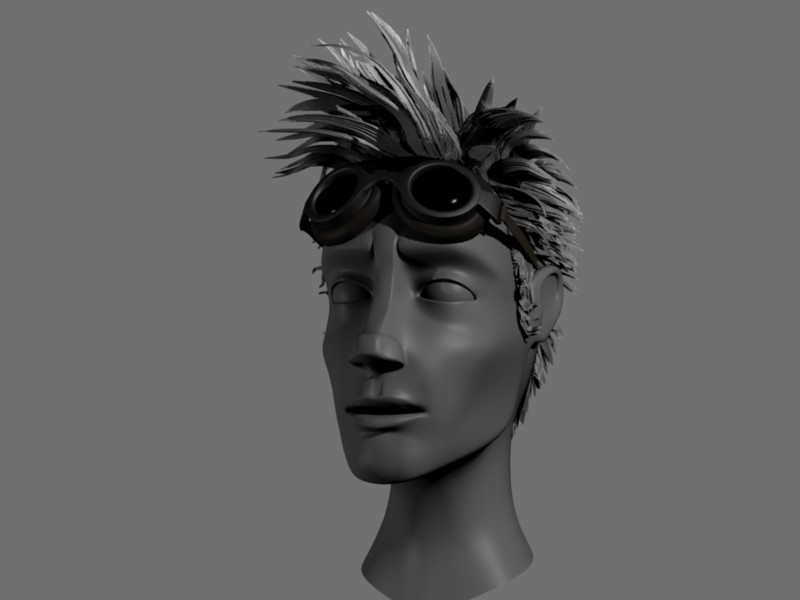 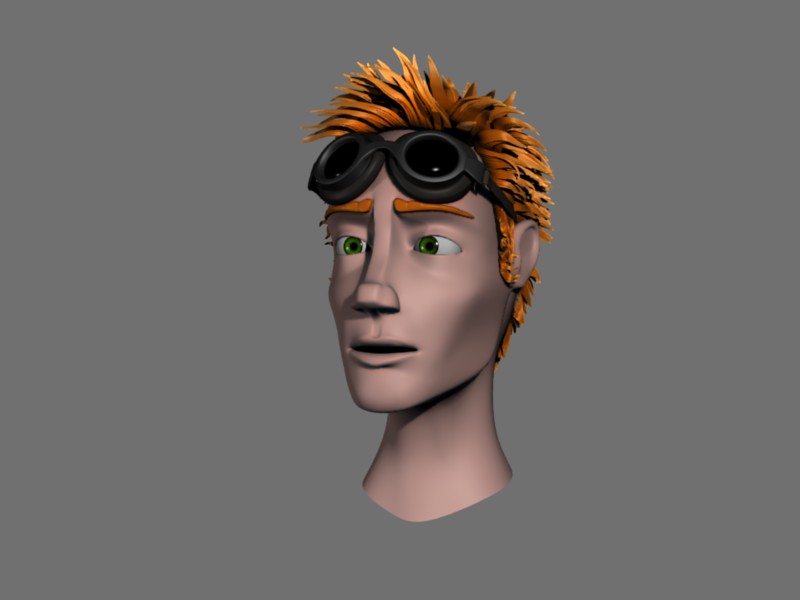 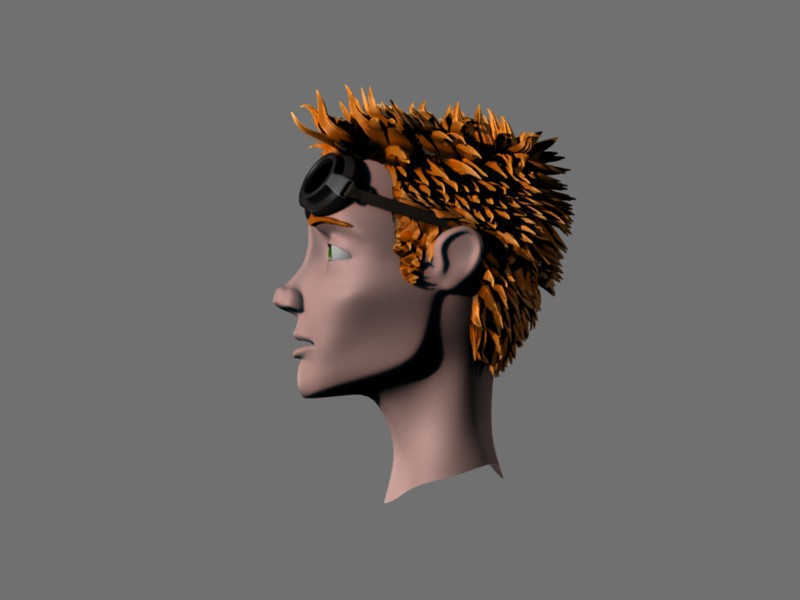 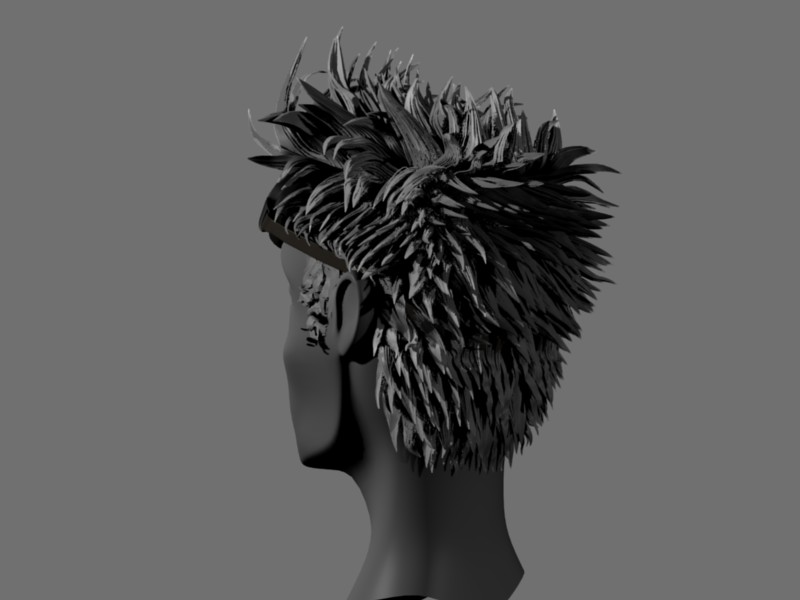 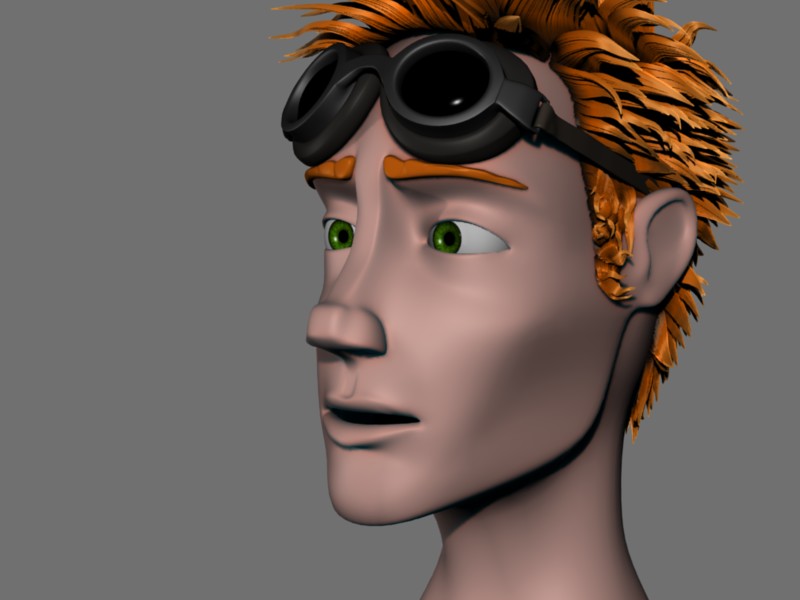 Really cool, the hair looks great. Would it be possible to get some kind of idea of the settings you’ve used for it?

at first I thought, the jawline is a little bit tooo sharp, but after seeing the other pictures I realize that this is the style! VERY AWESOME!!

I’m guessing, due to the goggles, that this would be a pilot? Either way, judging from the time era, the hairstyle is hopelessly inaccurate. It’s a great style, pretty cool hair, etc. but it definitely would not have been in existence around the early 20th century. A much neater hairstyle with a “combed” effect would be better, and more accurate.

Really cool, the hair looks great. Would it be possible to get some kind of idea of the settings you’ve used for it?

here’s a screen grab of the settings. basically just do it like a normal head of hair, but then just raise the clump up to the max-to-near-max setting. also, it needs to have raytraced shadows on your lights to look right.

I’m guessing, due to the goggles, that this would be a pilot? Either way, judging from the time era, the hairstyle is hopelessly inaccurate. It’s a great style, pretty cool hair, etc. but it definitely would not have been in existence around the early 20th century. A much neater hairstyle with a “combed” effect would be better, and more accurate.

jonesy is a demolitions expert. i gave him the tossled hair to go with his “fiery irish” attitude, and the fact that he’s really smart, sort of like the einstein of the demolitions. when i give him a texture map, i plan to put some black soot on his face, with the outline of the goggles were when he was wearing them (clean where the goggles were, sooty where they weren’t). 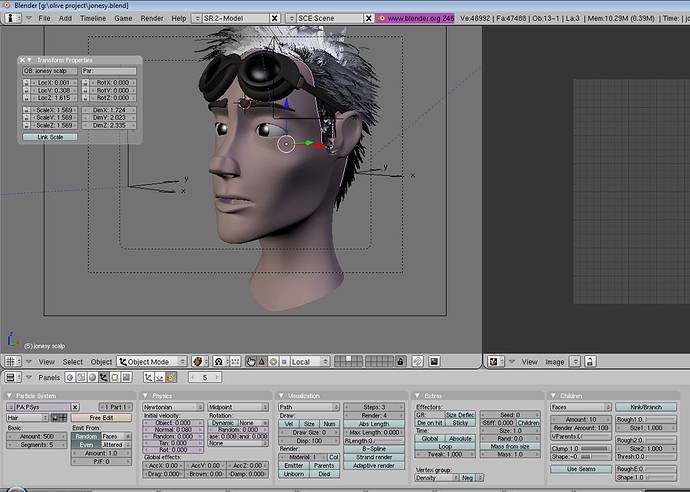 ok, took an existing body model i had made, and tweaked it to go with the head, then i sewed them together. i know the chest area looks a bit strange, but he’ll be wearing clothes when he’s done, so that shouldn’t be noticeable.

btw, it’s amazing how much time you save when you turn on “adaptive render” in the hair particle layout… 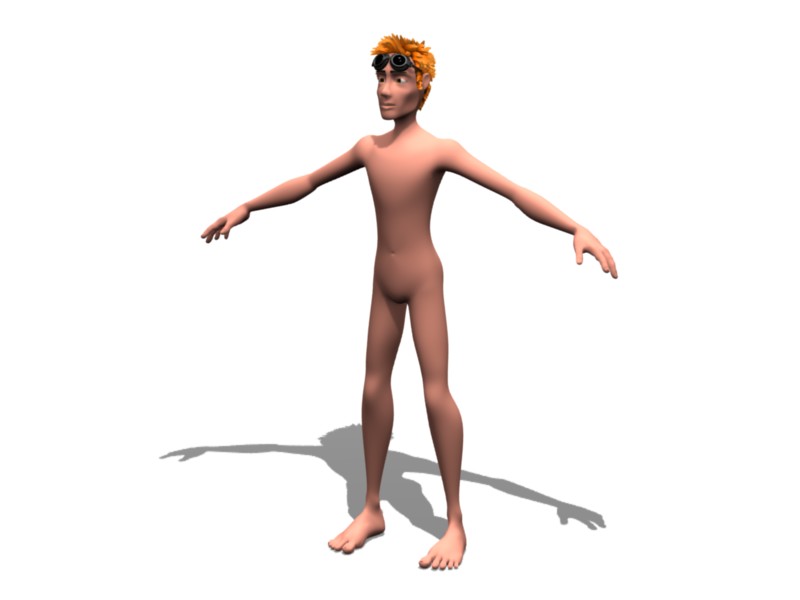 Hey very nice model…I was wondering - is it too late to get in on this?

well, stock up on some ultra-stiff hair gel, and you’ll be on your way

Hey very nice model…I was wondering - is it too late to get in on this?

not at all! we’re still sort of assigning tasks (there’s really only about 3 of us solidly onboard right now). for the most part, i’ll be doing most/all of the character modeling, but feel free to turn in some concept sketches. there’s also a tank and a robot that will need to be modeled. since those will have totally different rigs and such, i’ll let someone else do those if they want. but yeah, just join the forum over at blendering.com and join the discussion.:ba:

worked on his clothes. i know the boots are pretty wrong for the uniform, but (at least for now) that’s sort of the style i like. anyways, here he is so far. 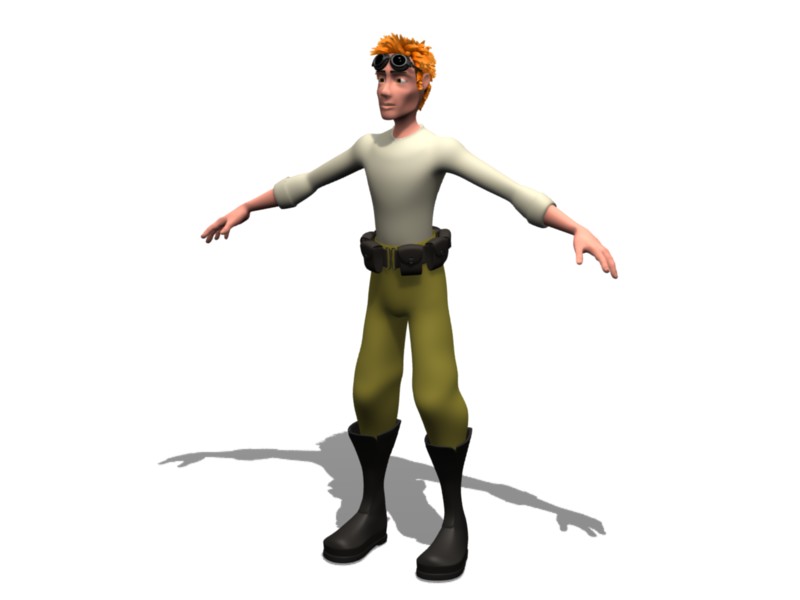 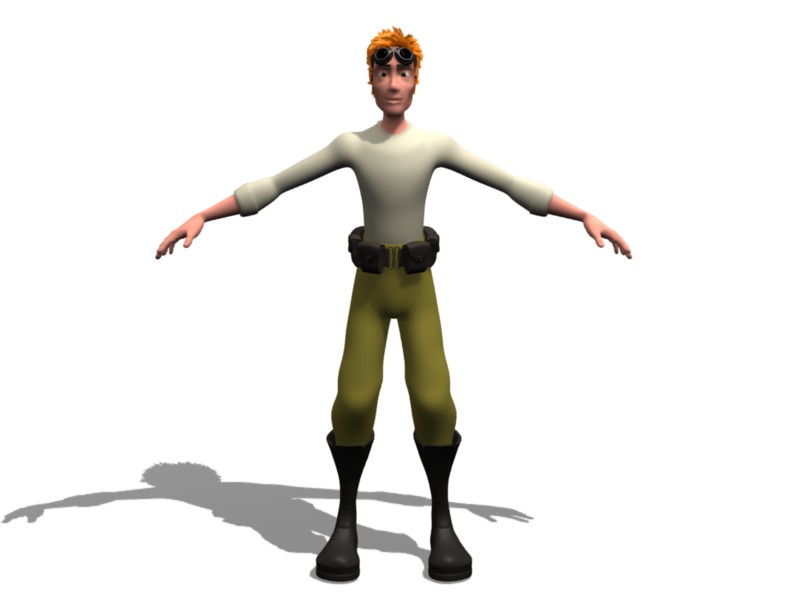 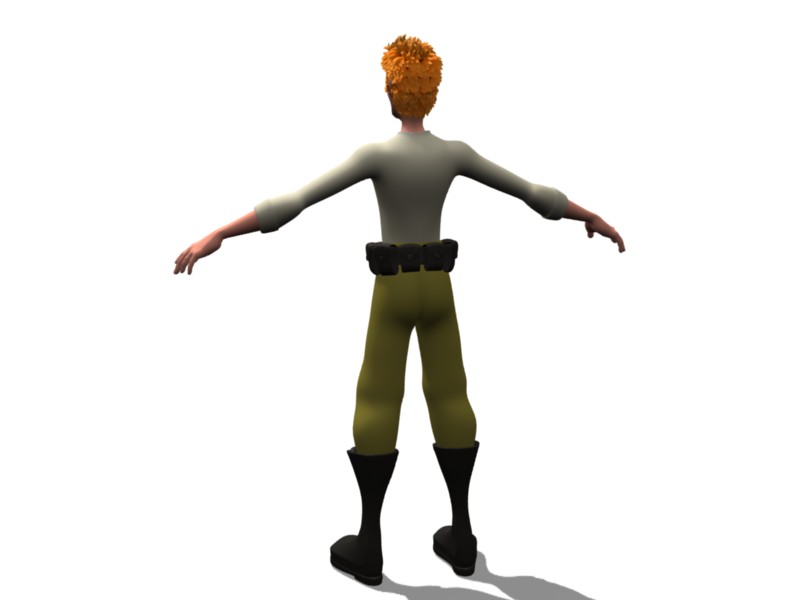 Cheers for the settings I’ll give em a whirl later when I get chance!

He reminds me of a young Cid Highwind from the Final Fantasy series:
http://www.yashodoa.com/roadtodamascus/image/squaresoft/ff705.jpg

nice have you made a tut on this id like to know how to model heads?

@odeas: yeah i guess he does look a little like that

but rest assured, this guy came from my imagination, as i’ve never watched the final fantasy series, aside from “the spirits within.”

He kind of reminds me of Final Fantasy VII: Advent Children.

), and threw him into a nice casual pose 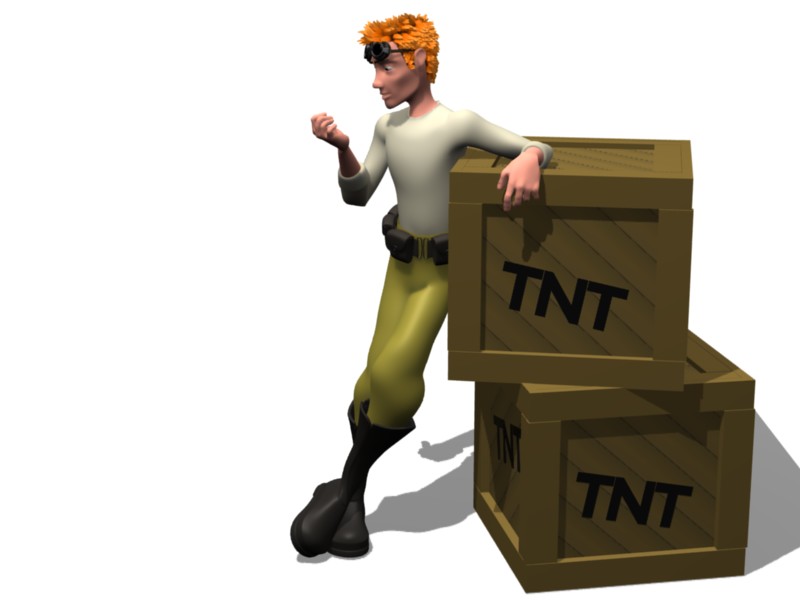