(This banner is a work in progress)

I have decided to ditch the computers in my school being the platform, so instead, I am using my own PC as a benchmark and releasing this game on the full.

A .txt file my friend and I compiled to summarise the game. Almost completely.

Human: Faster and better at parkour

Cyborg: More accurate with weapons (all metallic but with some flesh on them)

Space Station: Round map with many rooms

Planet: Like Earth but with a much more strange atmosphere and plants.

Spawn: When you spawn you have nothing you must punch and find weapons in crates/cases

Finish: Give game to school free with special license then sell on website.

MUST FINISH BEFORE END OF SCHOOL YEAR!!!

In the above screen shots, you can see SSAO, this is Martinsh’s SSAO filter, we have credited him where appropriate. This is the shader we used, with altered values to suit the size and custom parameters we desired.

Any thing you have to contribute, please consider an average computers specs of; Intel Core 2 Duo, 2 - 4 gb RAM, GT 250.

We are considering our possibilities for multiplayer systems for Blender. I am thinking that WSAG (When I finish reading the tutorials and the manual) will be the system we use in the end, but I am still looking into alternatives like the Multiplayer Addon by agoose77. Most of the assests are completeled, that being; models, textures and animations if any.

Thanks for your time guys.

could you just upload the screenshots on the forum instead of having to download them arselfs?

No, sorry, there was an error, I’m on it, I’m going to try using dropbox so that you can see them in the post.

Edit: Thank you mods, for the move.

If you want comments just upload screenshots please, keep working on it

Load-outs Prespawn: change your load-out before you spawn with a mixture between guns, explosives, magic or melee

I liked that planet with the brown and violet colors; it seems you also got a very good logic thinking and have some of the game already planned.

About first showcasing it where your study, I am sure it will bring recognition if finished; selling your game at your website would also be nice; we must show this ‘profitable’ side of the BGE to the blender foundation and the world.

Nice screenshots! I think these planet colors are nice, keep working on it

Ahem, in this video I demonstrate the new Ak 47 and it’s bullet holes, crouch (I think), aiming down iron sights, and the Ak’s reload animation.

The next video will include the same with a G36C. I made both models and textures myself. And I might release the models for free commercial use.

Demonstration of sun rays (or “God rays”)
These are non GLSL, they are just a plane with a texture, and I can only see this being used on large scale, far distance objects that you only see from an acute angle (0 x 45 x 45 degree angle).

Here is some concept art for the Human race. The first concept for the soldier model, and the first of, what I can see to be many revisions, the human’s spawn point idea.

Grass with an improved version of Mokazon’s LOD.

I have applied this LOD to many of the game’s assets, because the CPU in the school computers are better than the GPUs, and because the GPUs alone are terrible.

A .blend is finally available for the public. It is a very early alpha, it’s so early, it’s really, actually the alpha for a demo.

Tinker and have fun, but if you pull anything out of the .blend, like a model or a script, please, credit the labeled originator.

P.S. I deleted the file because I’m an idiot, sorry about that. I’m uploading an updated .blend.

~~~~~~~~ Another Update! ~~~~~~~~
Since my absence, I have decided to abolish using the computers at my school and use my own as a benchmark. Or your own if you could be so kind. The following .blend file is the latest Alien Forrest map that WILL be used in the final product. If you do run this scene please post your system specs (Only those that are necessary) and tell me what the logic and rasterizer averaged at, thank you.

I have discarded the old Alien Map and use an absolute flat map because it is so much easier to make and doesn’t require aligning objects to the floor. The underlying picture shows that the rasterizer is at ~50, it usually sits at around 13 but for some reason it was being disagreeable. The logic however is where it always is.

Thank you, have a nice day,

First off… Over 1 million faces for a small patch of forest? Thats an awful lot. But I’d thought I would try and help out. So I downloaded the file and ran it to try and give you some feedback on performance and things.

So I took a quick fraps recording and uploaded it to youtube. The video is unlisted, so only people on blenderartists should see it. I will remove it if you do not want it on youtube. Unfortunately Fraps halfs the FPS on my system, I have posted a screenshot without fraps running, under the video. I was averging about 30/40 fps without fraps, pretty smooth, a couple of stutters here and there as the LOD system was working away. 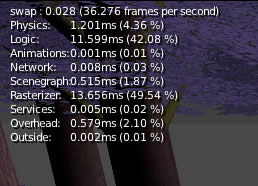 I wish I could record a video with it running at full speed on my machine, but I dont have a HD-PVR or anything like that, so fraps must do. I was pretty amazed it did run so smoothly, considering the MASSIVE memory useage and the sheer number of polys in the scene. Your LOD system must be doing a great job. But for this size of environment, and considering theres no player logic/ai or anything, I would expect at least 60fps. But some optimizations should see a great improvement.

Also, 7z is amazing. It compressed your 230mb file down to like 15mb or so. I didnt know it was so efficient, I’m definitely going to use that instead of zip or rar files from now on.

Thank you so much for responding so soon, and thank you also for helping with the benchmarking, man. I see that I have neglected to pack some of the textures. I will re-upload the file with the packed textures, I should also add that if you press the “x” key while in the game engine, you will turn on the SSAO.

Thank you very much,

Edit: This is the .blend with the packed textures. I apologise for the delay.
http://www.mediafire.com/download.php?t69smwqvmkhmi1n

I’ve been testing out a new lighting technique that I’ve been thinking about using lately, but trying to figure out just how it would work and how well it would work. And, after a lot of tweaking and testing, I have finally developed a cloudy-day-esque 3 pass SSAO lighting system. The first pass of SSAO is the small range filter for small objects like leaves and rocks, the third pass is for large objects like large walls and boulders and close range cliffs (otherwise they would have small black outlines), the middle pass is for the objects in between.

Here are the before and afters:

Wow, the difference is major. Nice. It really adds to the game - I wonder if you could do something about the blurring on the edges - if it won’t show up in a runtime, then it’s no problem.

If you’re referring to the SSAO exaggerating the edges of polygons, then it doesn’t really matter. Because when you have a texture like gravel then the variation in colour drowns out the fading dark colour of the SSAO. However, if you have a consistent texture it would be obvious, so if that is going to be the case I will just increase the poly count in that place, and take polies away in other places.